Yes, I Live in the Popeye House

Go ahead, do your Popeye laugh. Everyone has to do the laugh when I tell them I live there, or their mutilated version of it. Eye-guy-guy-guy, ah-guh-guh-gah, ike ike ike ike. I've heard so many different half-remembered Popeye laughs that I don't even remember what the real one sounds like anymore. For your information, I don't sit around watching Popeye all day.

And no, I don't like spinach. I haven't had spinach in years. I don't hate the taste, but I make a point of avoiding it because it's a lot easier to say "no" when people ask if I like it, which they always do. They always ask. You would have asked. As I see it, saying "yes" would just expose me to five percent more ridicule, and that's five percent I could really do without.

It's not my choice to live in the Popeye House. I have nothing to do with it. I live with my dad, he loves Popeye, mom left, he got a little nuts with the decor, et cetera. I don't have to get into the whole story. You can pretty much figure it out on your own just by looking at the house.If you haven't seen it, I don't really need to describe it. Just picture the words "Popeye House" in your mind, and whatever your brain comes up with is probably close enough.

I've tried to talk sense to my dad, but what's the use? "If I were your age, I'd be jazzed to live in the Popeye House." Yeah, but that's coming from the slightly biased viewpoint of a guy who's spent a decade of his adult life building an obscene shrine to Popeye. "Think of how many dates you could get by telling girls about it," he says. Sure, pop. Girls love the Popeye House, right? That's why I'm always beating back flocks of girls with a six-foot replica corncob pipe.

I guess I can't really ask my dad to get rid of the Popeye stuff. It's his one point of pride in life--I realize that sounds pretty depressing coming from his only son--and times he seems happiest are when people slow down for a look, or when people walk by and take photos. One or twice a year somebody writes a story about the Popeye House that gets picked up by a wire service, and dad spends a few weeks relishing the national spotlight. He doesn't care whether he's an "eccentric artist" or an "obsessed nostalgic," he just likes putting on the sailor suit and squinting for the cameras.

I love seeing dad happy, but those are the worst weeks for me. I may have been coasting by unnoticed for a month or two, maybe even building up a rapport with a classmate who's new in town, but as soon as Channel 4 needs a last-minute human interest fluff piece, I'm screwed. The jokes start again, the cans of spinach in my locker, and always the eh-gah-gah-gahs in the hall.

You can't possibly imagine what it's like to have your entire young life defined by a cartoon character from the 1930s. You're easy pickings for any clown who wants to get a shot in. Living in a Popeye House isn't a physical infirmity, so nobody's going to say "hey, leave him alone, he can't help it." You're low-hanging fruit. Even the teachers score points off you when they need a laugh. You can get mad, but hey, what a stupid thing to get mad about. You can make the mistake of laughing along, but it's like trademark law--if you don't defend yourself every time, you eventually lose the right to object. 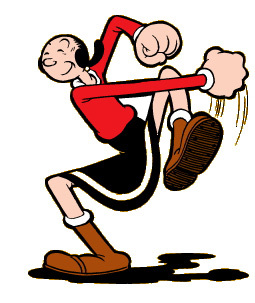 Nobody wants to be your friend, because then they're Wimpy. You can never get a girlfriend, because if she's skinny, she's Olive Oyl. If she's not skinny, well--let's just say that comforting my crying date after the 9th grade formal with the words "but you don't even have a beard" was not one of my smoothest moments.

It seems like no matter what I do, I can't shake it. Do people look at me in the halls and go, "hey, it's John, the third best guy on the swim team"? No, of course not. "Third place? Not quite strong to the finnich, huh Popeye? Better eat some more greens, buddy. Uh-kuh-kuh-kuh." Am I John, the guy who sold more chocolate bars than anyone else in the junior class and practically paid for the water park trip single-handedly? Oh, good heavens, no. "Hey Popeye, I'd gladly pay you Thursday for a chocolate bar today. Egg egg egg egg."

Jesus, how do they keep coming up with Popeye references? It's like they know more about Popeye than I do. Does anyone even watch Popeye? Do they still show it on TV? Honestly, what the hell?

Sometimes I wonder if "arsonist" would be a better way to be thought of by my peers, but even that's probably an impossible dream. I'd just be the crazy Popeye guy who burnt down the Popeye House.