Thank You for Applying to be a Character in Our RPG!

Thank you [NULL] for applying to be a character in our upcoming role-playing videogame! We are very excited you chose to reside in our land and world, which we feel offers numerous superior features and benefits. Please answer the following questions honestly and truthfully. Your career, and the remainder of your life, depend on your responses. We look forward to the results, [NULL]! 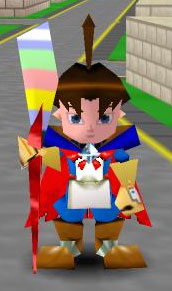 1) Somebody approaches you and announces their intent to save the world from some powerful, evil creature threatening to destroy it. You:

A. Try to sell them a rusty sword for 500 gold pieces, because if the world isn't going to get blown up, you'll still need to pay for all those wooden barrels and crates you bought for decoration.

B. Are looking into a mirror.

C. Reply with some helpful, invaluable comment such as "my wife and I have lived in this town our entire lives!" or "I love to bake!"

D. Try to demotivate the person by kidnapping their girlfriend, killing their parents, or doing something vaguely evil like changing the color of several giant crystals.

E. Offer your aid, because you love going on adventures! You also love hauling 400 pounds of equipment and recklessly rushing into battle to catch spears with your face.

2) You stumble across a group of trolls / orcs / mean elves / evil magic dog children from the future. You:

A. Confidently pace around the area, assured by the knowledge you're somehow immortal and weapons pass harmlessly through you.

B. Immediately attack and beat them with things in your backpack until they disappear and their corpses are replaced with comically large bags of gold.

C. Scream "oh no!" and run around in circles until somebody either saves you or triggers an event resulting in your death and a bunch of little identical fires appearing on your roof.

D. Give them jobs wandering the hallways of your castle, assaulting any white person not wearing at least two black skulls on their outfit.

E. Join your partner in battle, providing tactical assistance by getting stuck in world geometry and running in place for several hours. 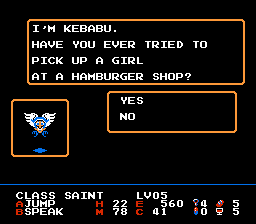 3) An old man approaches you and pleads for your assistance, claiming his wife left to pick fairyberries several years ago, never to return. You:

A. Try to sell him some fairyberries for 100 gold each.

B. Agree to track down and rescue his wife. This whole "saving the world" quest can wait for a few hours while you murder shit in a cave and eventually untie some old broad captured by trolls / orcs / mean elves / ghosts dads.

C. Offer some advice relevant to his situation, such as "this town was founded 500 years ago!" or "I wish it was warmer! Brrr!"

D. Ask him if he has a strong, motivated, intelligent son. If so, stab him with your obscenely large sword, leaving him just enough energy to crawl home and give his son a rough overview of what just happened and if his death should be avenged (it should).

E. Stand around and stare off into space until the big guy you're following starts moving again. Conversations are just as uninteresting as using healing items at appropriate times.