VISIONS and PROPHECIES From The Mountain

Monday, May 24, 2004 by Rich "Lowtax" Kyanka (@TwitterHasBannedAllMyAccountsEver)
Know of an awful site? Send it to us and become a hero!

VISIONS and PROPHECIES From The Mountain, submitted by sakesniper. Why does Jesus Christ insist on only speaking through the crazy people of the world? Why doesn't he just one day decide, "hey, if my voice can be heard by anybody anywhere, why don't I pick this nice, emotionally stable, coherent businessman living in Detroit?" I'm sure a lot of religious issues in the world would disappear if JC would adapt his Biblical policies to a more logical set of rules, because I really don't believe it's particularly wise to only speak through people who spend a majority of their days screaming at hats. Although the webmaster, Linda Newkirk, may seem like a rational and intelligent person (for example, she doesn't have any animated gifs of bloody exploding baby skulls on her front page), I have reason to suspect that Jesus made another flawed decision when choosing to convey his important messages through this particular individual. 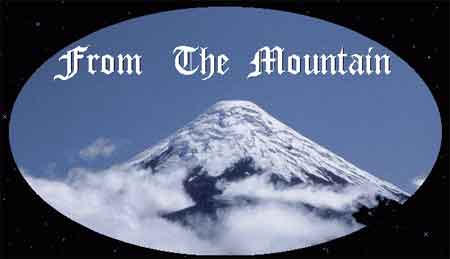 "Why did all forsake him but The Arab, My Lord?"

"My Child, as long as a single vehicle moves, you shall need oil. But, even The Arab shall forsake you. Does this show you your future state, My Child?"

"I see it, My Lord. But, who are these others at this funeral?"

"My Child, look! France is not there. England is there along with Russia, China, Mexico, and Switzerland. Canada is not there. Australia is not there. Belgium is there, along with Germany, who has three representatives. Peru and Columbia are there along with Panama. And, there are others. All in all you see 22. These are mostly countries, but there are three individual families represented. The Rothschilds of Germany are the most prominent. (Make not of the mention of these three families. You will see much about their evil.) These, My Child, have planned your demise for a very long time. It is no accident that Bill Clinton was in The Soviet Union as a war protester. His red connections run as deep as blood. He was hand-picked by Satan even before this life to do Satan's work, as he is smooth and credible."

Oh that darn Bill Clinton! If I knew he had such close ties to the devil, I probably would've warned people against voting for him. I would be talking to my friends and they would casually say, "oh I plan on voting for Bill Clinton" and then I'd say, "hey buddy you'd better think twice before doing that, I hear Bill's red connections run as deep as blood and he was hand-picked by Satan himself" and then my friend would be all like, "oh gosh I didn't know that" and then I'd be all "I told you so" and stuff and we'd eat some Fruit by the Foot while playing Blue Stinger for the Dreamcast because, oh god, that was such an awesome game. I'm just kidding, Blue Stinger was horrible.

Oh yeah, and just so you know, Jesus claimed that Iraq would become a superpower back in 1997 due to Saddam Hussein's close connections with both the mafia and Pope. Jesus, you got some 'splainin' to do!

Oops, and didn't want to forget this gem: apparently Pope John Paul II was a chemist who manufactured cyanide and sold it to the Nazis at Auschwitz so they could kill Jews. This somehow ties into the time when the webmaster had a dream about a "second sun" named "Planet X" which looked like "prepared mustard." Of course the obvious question here is "how the hell do you 'prepare' mustard?" When you buy it at the store, is it unprepared? Do you have to open the lid, scoop some out, and give it a lengthy pep talk? "Go mustard! You can do it!" Linda Newkirk must scream at her holy condiments. "Do it for our second sun, Planet X, which I have dubbed a planet despite the fact that I claim it's a sun!" Then she goes back to screaming at her hat, accusing it of being a satanic witch disguised as a Jew disguised as Bill Clinton disguised as the Pope.

Oops again, one last thing; check out how the webmaster concludes most of her detailed messages from Jesus Christ:

Oh White Buffalo Calf Woman, only you are able to unravel the mysteries of the universe! Who else is qualified enough to reveal to the world the fact that Russia invaded Florida and took over Cape Canaveral on July 1st, 1997?