Saddam Hussein Has Made Me Rich!

I'm pretty sure this guy is somebody's World's Greatest Grandpa.Just yesterday I found myself in a place I rarely ever go - my closet. I try to avoid this place as much as possible because I have yet to find a graceful means of exiting it without forfeiting my heterosexuality. But nonetheless I was in there, and I discovered something from my past that I had once tried venomously to forget. At first I was angered, but then I realized I had struck gold - the kind of gold that gets you castles full of solid gold women with diamond coated ovaries and treasure chests full of golden goblets filled to the golden brim with gold-wrapped chocolate coins. I discovered a six inch stack of Desert Storm trading cards! In my adventurous youth I remember purchasing these awesome monuments to America's noble Gulf War exploits at a dollar store for the sum total of one dollar. Now, over ten years later, these cards are undoubtedly worth millions. I'm now living the American wet dream, and I owe it all to my main man Saddam Hussein for invading Kuwait in 1990. His actions sparked a global effort called Desert Storm, and Desert Storm sparked the good people at Topps to create a truly inspiring set of trading cards. Nothing says "war is hell" and "war is the worst thing humans can create" more than trading cards aimed at kids!

Now I'm no novice when it comes to slapping monetary values on things, whether those things be loved ones, morals, or junk I find in my closet. Hell, if need be, I could probably appraise a fine antique stool at fifty yards without even squinting. What I want to do now is talk down to you while I go over why this collection surmounts me in the halls of filthy richdom. First of all, Operation Desert Storm was a one shot deal. Unlike sports, which occur constantly and seemingly only to vex me, the Gulf War started and ended rather quickly. Peace was established and the Middle East, so there will never be need for another Desert Storm! That means the Desert Storm trading cards were a one shot deal as well, placing extra value on them in much the same way a triple word score would place triple the value on a devastating word like "zinc." Second, the war happened over a decade ago. This means that these cards have been allowed to ripen like a fine wine, becoming more delectable with each passing year. I feel like a dirty Nazi thief finally able to appreciate the art I helped steal.

The back of this card says, "Lt. Gen. Yeosock has described his job as 'a continuous balancing and rebalancing.'" I look forawrd to doing that with my checkbook now that I'm filthy rich.To make things ever more spicy, I have a whole slew of cards featuring some of the hottest players in the game of war. Just take a gander at some of these awesome, awesome cards I have in my collection:

If that isn't an all-star line-up, then there is nothing sacred left to live for and I will gladly take my life by jumping off of Lover's Peak. Good thing that's an all-star line-up. If you take a closer look, you will most definitely note a lot of these American Heroes are retired! Lieutenant General Charles Horner will no longer be gracing the Air Force Central Command with his excellent skills and brilliant mind. And Schwarzkopf, perhaps the second most famous military leader to arise out of the Desert Storm conflict, isn't giving any orders to the troops. He's sitting in a recliner watching TV or enjoying a good book. He could even be reflecting on his long career of military service in much the same way I reflect on my long mirror. The fact that these guys are retired only means the value of my collection grows bigger, like a malignant tumor. But my story doesn't end there, not by a long shot! I have five cards featuring two of the biggest guns in the world: Colin Powell and Dick Cheney. Both of these guys are now practically the president, so this nifty little combo card could almost be looked upon as a rookie card! Rookie cards = cash money! In addition to these hunks I have a large number of cards depicting the people, weapons, vehicles, and equipment of war. 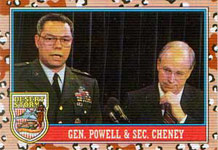 Here we see a young Dick Cheney not dying of a heart attack. We also see General Powell probably declaring "USA #1!"Now I can honestly say that my only regret in life is that I didn't buy more of these cards when I had the chance. When I was just a small lad standing before that towering ziggurat of unsold boxes of Desert Storm cards, I had no idea I was securing a prosperous future. I can't even begin to fathom how wealthy I would be now had I purchased ten boxes instead of one. Oh, wait, I can. Up until yesterday I would never have even thought I would become rich thanks to the actions of Saddam Hussein and the Iraqi army. Iraq, a country thousands of miles from me seems so distant not even my imagination bothers to travel there, yet I am now indebted to it! Thankfully I'm rich enough to pay off that debt! Now instead of thinking of it as an evil place of oppression and tyrannical rule, I will instead think fondly of the good things, like when a noble native of Baghdad once thwarted a Cyclops and an army of skeletons. Good times!

The only thing left for me to do now is exchange my stack of Desert Storm cards for money. I value my collection to be worth a cool five million, so if somebody wants to cut me a check for that I'll gladly hand over the cards. All I know is that I'm sitting on a pile of money seeds that need only a little water to grow into a garden of riches as wild as the untamed lawn of a crazy person. I patiently await my millions. I'll take my millions now. Where are my millions?

Letters, She Gets Letters

Our own Emily "Rhubarb Pies" Reigel is back after a brief stint in detox. She's got a new heaping helping of answers to questions written by everyday people like you and me (assuming I'm not a fictitious internet personality). Be like a vampire and sink your teeth into this:

Who wrote the book of love ?

I am ashamed to see that you are a lazy good-for-nothing slob and are unable to find this information for yourself. What with the amazing advances in technology and the bountiful resources obviously available to you on the internet and elsewhere, it is inexcusable for you to need my help to answer this question. Your answer is at your very fingertips! If you are not lazy then you are most certainly stupid, so you should take your pick and rectify the situation to the best of your ability. If it turns out that you are lazy you can just stop being lazy, but if you're stupid you might have to resort to more desperate measures such as huffing gasoline until you are able to see through tomorrow.

POWERFUL SOLUTIONS TO MODERN DAY LIVING, BUT CHEAPER THAN DIANETICS!