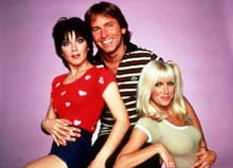 "Come and kick in my doooooor."Lindsay Dawn Riley was wearing thong underwear and a bra five sizes too small that made her resemble a bucket of dough being forced through a fishing net. She embodied that sort of raw sexuality that you can only get from burning a wig on an electric stove. As she steadied herself drunkenly on the frame of the door I caught a whiff of cheap whiskey riding the convection currents of evaporating sweat. It was the middle of the morning on a Sunday and Lindsay had bloody knuckles and a sack of placental fluids clenched in her fist. The sun was as bright as a magnesium fire in the cloudless blue sky but at that moment Tucson, Arizona had never seemed so dark.

"That's not human." I was not asking, I was asserting a hopeful reality.

"Goat leftovers, nigger." She slurred and tried to push past me into my friend's decaying home.

I made the mistake of standing in her path. For an instant I was a matador lost in thought as the bull charges forward to skewer me. Bulls are hard and sharp; Lindsay was very soft unless she was using her fists. She just shoved me back a few steps with her bulk, a purple and red gush of fluid squeezing out of the plastic bag in her hand and covering my chest. She staggered into the living room and fumbled in her bra for a solitary crumpled cigarette. With dismay I turned to close the door behind her. At least this humiliation could be continued in private.

When your hands are covered with goat placenta it is difficult to turn a doorknob. Neighbors peered curiously through windows at me as I struggled to shut the door. The choking coughs that the nearly-agoraphobic Todd made at night were probably sufficient to convince them that I was running some sort of Underground Railroad for tuberculosis patients. Being covered in clotted animal blood sealed the deal.

"NO GUESTS!" Todd shrieked from the kitchen and then immediately started into a coughing fit.

I finally managed to slam the door shut just as Todd made his grand entrance. He was pale-skinned to the point of translucence and his sunken eyes were ringed dark with fatigue. He never slept and ate nothing but uncooked canned foods, insisting that the canning process somehow fortified the contents with vitamins. He had finally had the maggots scraped out of his wound by the home health nurse but now he had a huge constantly seeping bandage on his arm from the coyote bite that had nearly done him in with gangrene. I was convinced he still might have contracted rabies.

"Oh hey it's a faggot." Lindsay flicked her lighter and sloshed more goat placenta on the already matted carpeting.

"Not her again!" Todd exclaimed in between tortured gasps. "You can't bring her in here!" 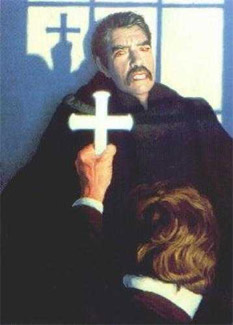 Does not apply.Were it so simple to ward off Lindsay Dawn Riley I would have hung the doors with garlic and turned the attic into a devotional to the crucifixion.

"Do you think I rang the dinner bell? She comes on her own timetable. She's a force of fucking nature." I explained.

"Force of fucking nature." Lindsay agreed, savaging the butt of the cigarette between her jagged teeth.

"Just get her out! And NO SMOKING!" Todd whirled the blanket he had draped around his shoulders like a cape and exited back into the kitchen.

Lindsay blew smoke in his wake and followed up with a lewd gesture involving her nearly-exposed mound of genitalia and her tobacco stained fingers. I wanted to look away but my eyes were glued to every shake, jiggle, and stain as if I were watching the Challenger come apart in the sky.

"You said it yourself I'm a force of nature." She continued as though I might not have understood my own metaphor. "Does a tornado need a reason to spin? Does a cloud need a reason to…fucking do whatever a gay ass cloud does? Do I need a reason to come in here and see my nigger?"

She was right. Not since the civil war had a man been owned so completely by another human being. Racist implications aside, I was most definitely Lindsay's nigger.

"Just so happens I do have a reason. Hold this."

Lindsay thrust the sack of goat afterbirth in my direction and I reluctantly took it so that she could dig into the left cup of her bulging bra.

"While I'm asking questions, why are you walking around in broad daylight in your underwear?"

She paused in her digging and screwed up her face until she looked convincingly offended by my question.

"These ain't my underwear, you dumb fucking Jew." She spit, as if it explained everything. 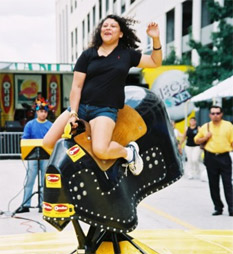 Not pictured: the horror of hell unleashed on mankind.It would have to do as it was the only explanation I could pry from her odorous maw. She returned to the task of feeling around inside the cups of someone else's bra. Her grotesquely oversized areola peeked out like bloodstains seeping under a closed door and her fingers stretched the bra's fabric like sausages in a wet sack.

"Any other night and I would be up for whatever it is you have in mind." I lied. "Not tonight."

Lindsay's enthusiasm was undiminished. At last she extracted a wadded handful of red carnival tickets slick with sweat and hot with stink from the underside of her teet.

"Free rides at Cal's!" She shook her fist in my face.

"Free rides at Cal's" was a phrase only slightly less welcome than "you have inoperable dick cancer." It meant that Lindsay had somehow swindled free ride tickets for the mechanical bull at Texas Cal's Hooternanny. Cal's was a charming rodeo bar where the floor was covered with sawdust, the patrons wore well-broken cowboy boots, and there was a hose directly above the mechanical bull that soaked a t-shirt with water. Lindsay had a fondness for the mechanical bull that bordered on sexual addiction and the bar owner - a pock-faced Mexican named Javier - had an equally intense dislike for Lindsay. That meant getting the free ride tickets was something to truly get excited about in her surreal and terrible world.

"Lindsay, I have a date tonight," was what I might have said to a normal human being.

Instead I gradually enlightened her about my previous engagement for the evening using a series of bawdy tales about the D-cupped barista at the coffee shop I had been lusting after for more than a month. When I finally broke the dinner-and-a-movie news to Lindsay she was completely unshaken.

"I like threesomes." She explained with a lecherous wink and a coquettish chew on her lower lip that could have served as a scare tactic slide in an oral hygiene Power Point presentation.

Lindsay had invited herself on my date and it would have taken more dynamite than I could buy in an afternoon to dislodge her. I told Lindsay I would be leaving for my date fifteen minutes later than I planned to actually leave to pick up Nicole. That was her name and she was beautiful. Shy, good sense of humor, those cute little black emo glasses, those enormous pert breasts. She told me she was studying philosophy at some college or another. Nicole and those fantastic breasts, studying hard, in the shower, slipping and sliding and…Lindsay of course managed to show up fifteen minutes before I told her to.

At least she had put a white t-shirt on over someone else's underwear. The humiliation level of showing up to my first date with Nicole with a bipedal wad of growth hormones and bad language might be reduced by up to ten percent.

"Leave the bag." I insisted and was amazed when she tossed it in roughly the same direction as a storm drain.

It was a monumental concession. Lindsay grunted and heaved her shuddering bulk into the passenger seat of my borrowed Lincoln. The drive to Nicole's apartment was as uneventful as those sorts of things could be with Lindsay in the car. She groped my crotch several times and belched so powerfully that she threw up in her mouth and had to spit it out the window that she had conveniently forgotten to roll down first. By the time we arrived outside the suburban duplex Nicole called home Lindsay had managed to marinate the entire passenger side of my car in her digestive juices. Things were off to a marvelous start and I had not even rung the doorbell.