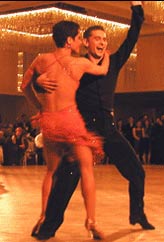 I have been absent recently because of my commitments to the professional Latin dance circuit.

Perhaps some of you have noticed my absence in the past few weeks from the cutting edge humor-website scene. Perhaps some of you noticed this with utmost glee and proceeded to prance about in celebration while wearing your mother's garter belts and singing the hit song, "My Heart Will Go On" from the popular movie, "Titanic." I wish that I were able to come up with some good excuse as to why I have been gone, such as my needing to assist in the test-vaccination of hundreds of rhesus monkeys with smallpox for a top-secret government program designed to give all rhesus monkeys on the planet smallpox and then cure them of smallpox. Perhaps another worthwhile explanation would be that I have been too busy to update because I have been spending all of my time protesting in front of the US capitol concerning the fact that the ballot count for the 2000 presidential election was faulty and that Al Gore is the true leader of the free world. USA #1. GO GORE GO! An even better solution would be for me to say that I have renounced all forms of technology and am currently living in a ditch behind a 7-11 outside of Racine, Wisconsin, surviving on waste water and small edible ferns. That last one wouldn't be far from the truth, but alas, it's still not true.

I have been in my beloved homeland of Wisconsin for the past few weeks, but I have done nothing so glamorous as drinking waste water in a ditch. Why am I here in the cold and frozen North? Well, that's a long, sad story filled with orphaned bear cubs, pepperoni-flavored dog treats, and scabies. Actually, the story doesn't have any of those things in it, but it does have me in in it and I'm pretty close to an orphaned bear cub at times, especially when hungry. The fact of the matter is (deep breath), Rich "Left Eye" Kyanka and I broke up, and I've been spending all of my time on the unpleasant task of moving my shit back to Wisconsin and figuring out what I want to do with my life from here. You heard it right, folks, we are no longer a couple. We are splitsville, finished, kaput. It's over, Rover.

I won't kid myself into thinking that all y'all want to hear about my very fascinating grad school plans, so I'll skip to the juicy parts and explain why Mr. K and I decided to go our separate ways. I'll actually give you a couple lists of reasons why we are apart and from each of our perspectives, so that you may better understand what it was that finally told us that our relationship may not have been meant to be after all.

Emily's Reasons For Dumping that Zero to Get Herself a Hero 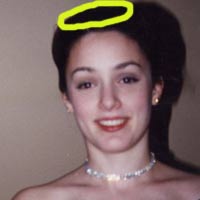 1. I eventually realized that I just couldn't be fair to Rich when I had another man in my life. Yes, it is Fordred Aran that I speak of, and though my relationship with Rich was a happy one, he could not offer me the safety and security that a level six archmage could.

2. I had a pet rock when I was younger and the novelty has worn off.

3. He kept asking me whether I would be ok having extra feet surgically grafted to other areas of my body. He also spent hours and hours just talking to my feet. When I tried to say something, he'd say, "Shh! DON'T INTERRUPT US!!"

4. He wouldn't stop talking to me in cyber-speak. When I said something funny he said, "LOL." In the morning he would ask, "Did u sleep ok, d00d?" When I announced that I would shortly be leaving for Wisconsin, he said, "Plz tell me y u r leaving. :(" He'd actually say, "Sad-face" and make hand-gestures to indicate the letters "y" "r" and "u."

5. There are only so many times I can go to the Outback Steakhouse before wanting to kill or be killed. That magical number was passed several months ago and now I must fulfill my destiny by killing one retired sewage treatment plant worker for every time I have patronized that soul-destroying establishment and then I must find my own sweet death by means of lamprey eel.

6. Missouri had troops fight for the Confederacy (Rebel bastards) in the Civil War. Rich is from Missouri. This is unacceptable. 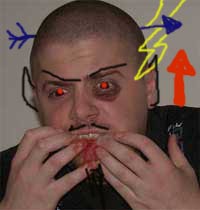 Rich's Reasons to Take the Money and Run

1. She wanted to do crazy things such as "go outside" or "talk to other people."

3. If I have to hear her yelling at the TV during a Packer game one more time I swear that I'll burn this place to the ground, rebuild it out of tampons, and burn it to the ground again. After it has been burned for the second time I will rub the ashes in her face and ask her how her precious football team is doing now. How's it doing now, huh, bitch?!

4. She didn't like it when I held entire conversations with her feet instead of with her. What can I say, her feet were better company. And a whole lot better-looking to boot. Get it? BOOT?! Because I was talking about feet before, so, you know, boot.

5. That whole "12-year old boy who is a chimney-sweep in a Dickensian novel" look was ok for awhile, but I'm ready for something new. Something LARGE AND IN CHARGE. 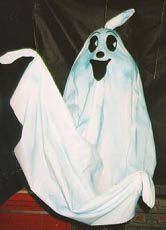 We are as happy as this ghosty thing, which by all appearances is quite happy indeed.

Despite our break-up, Rich and I are on excellent terms. I truly believe that we will remain friends for the rest of our lives and that this fact has nothing to do with my having his credit card and threatening to use it unless he continues to talk to me. We get along amazingly well and I still wonder how we were able to put up with each other 24 hours per day for over eight months, not to mention the $600 phone bills for months before we moved in together. He's a sweet, smart, sweaty guy with a whole lot of guns and I do not doubt that he will succeed at whatever he does. This is especially true if what he does includes being nice, solving problems, sweating on things, and then shooting them.

Breaking up is hard to do, but it isn't so hard when both people know that a lot of things just weren't right. For us, just like any other couple of normal, fairly boring people, we came to the conclusion that it really would be better for both of us if we went our own ways for the foreseeable future. This means that I will be free to play video games, live in poverty, and study for the dumb GRE's and that he will be free to not have to deal with my constant whining. We'll both be happier people. He'll get more Flash coding done and I'll get better at Warcraft 3. Hooray!

So, here I am back in Madison, Wisconsin, and there he is in Washington. It's weird but ok. I'm resuming my writing duties and everything is pretty much like it was before, only we're not living together any more and my crazy parents are now crazy in other ways not pertaining to our relationship. I'm trying to find a job so that I can eat, but it looks as though I'll have to settle for some dumb temp thing where I punch numbers into a screen all day while scratching my crotch. In any case, everything is ok, and although it was my duty to break the bad news to y'all, as it were, it's really no biggie smalls because everyone is happier now than they have been for quite some time, and that's including the time that we saw James Woods waddle around in a kiddie pool full of mayonnaise in exchange for a couple lines of coke.

Those nutty State Og folks are rip-roarin' through more helpful ways to make your life better! These tips and guidelines are chock full of ways for everyone to live life the State Og way (and is there really any other way?). Included here is information on excellent books engineered to make you smarter, making the most out of your hospital stay, self-defense tips, and how to make lemonade when life keeps on tossing used condoms- I mean lemons, your way.

Problem: feelings of dissatisfaction during the job.
Solution: The State Og support group arrives at your workplace, serves you coffee and cake at specific intervals, and shoots anyone who bothers you during the day. NOTE: Wacky Ricochet Bullets are no longer used.

Problem: loved one threatens divorce.
Solution: We parachute down to the scene and hold your spouse at knifepoint until he retracts his statement. NOTE: Please write “divorce” legibly. It has been accidentally mistaken for “kill me whenever you get the chance” more times than we can count.

Head on over there to see for yourself before you die! DO IT! DO IT NOW!!