Battle of the Crazy Ideology Titans!!

At this point everyone on earth has heard of the Taliban. In addition, most of you have already know about another dangerous religion known as "Scientology." But exactly how much do you know about these two shadowy organizations as a whole? What are their ultimate goals, beliefs, and capabilities? I have endeavored to answer these questions and more by expending the majority of the liquid reserves from Arlogeist GmbH, including the capital gained when we agreed to a dangerous radioactive loan from State Og. I'm out on a limb for you people... if this investigation doesn't somehow pay off, they are going to send a phalanx of arachnid kill-droids to burn away my skin with fleshmelters. I'm fine with this though; it's worth putting up with the searing pain to expose the even greater horrors of the Taliban and their equally terrible Scientologist cousins.

I have assembled the following remarkably complete dossiers on both groups so you can become better acquainted with these fanatical zealots. An amazingly large amount of my blood and vital organs poured out for this information, so value it as I do and alter your future actions accordingly. 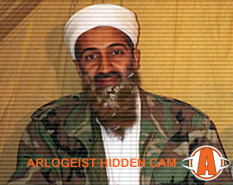 For his acts of terror The Great Pumpkin has granted bin Laden a pudding beard.Philosophy: The Taliban is the ruling government in Afghanistan and is an extremist faction of the Islamic faith. While they claim to follow the path of Islam, many Muslims can't help but doubt their theories which include the following "alternate director's cut version" of Islam:Methodology: The Taliban regularly practice human sacrifice in an effort to win favor from Allah. They will often cut the still-beating hearts out of convicted criminals. If you are particularly bad they will hire a Russian boxer to punch your head off and then replace your bloody neck stump with a record turntable that constantly plays "Golden Hits of the 70s", which is Allah's favorite time period. The Taliban also endorses terrorism. While they do not specifically endorse the catastrophic and horrifying attacks on the World Trade Center, they do support terrorist efforts. These include the "Great Frock Fiasco of 1987", "The Search for the Haunted Yeti" in 1990, and most notably "Captain von Bismarck Has Lost His Monument" in 1994. These dastardly capers might not occupy the same historical significance as the attack on the World Trade Center, but they are terrible indeed.

Capabilities: With the covert assistance of well-connected and wealthy terrorist leaders like Osama bin Laden, the Taliban has powerful and far-reaching capabilities. It will be no easy task for the United States and our allies to eliminate the Taliban entirely. On paper however, the armed forces and the resources of the Taliban are not very impressive. These include:

Final Analysis: The listed resources of the Taliban seem fairly paltry compared to the incredible wealth of the United States, but when combined with the insane fervor of followers of the Taliban these meager tools are an arsenal to be reckoned with. They won't be winning many converts from more levelheaded (read as: less apeshit insane) members of the Islamic faith, but those they already have are forged in the iron of oppression and hollow beard pudding promises.

The Church of Scientology 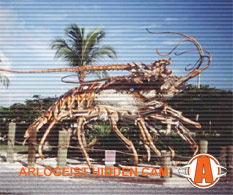 This is a level 3 Scientologist, seen in this rare hidden footage without his disguise.Philosophy: While not as openly crazy as the Taliban, within the malodorous chest cavity of Scientology beats a black heart of evil obscured beneath layers of cheery celebrity glad-hands and legal maneuvering. The Church of Scientology is run by a secret order known as the "inner circle" that are privy to all of the knowledge of Scientology. From what Arlogeist's infiltrators managed to uncover, this vast reserve of dangerous information includes:The philosophy of the Scientologists includes the belief that eating live human babies will give them the power to teleport inside their hidden volcano sanctum. It's from this inner sanctum that they believe L. Ron Hubbard exists in mummy form, fighting with those who have eaten babies in the secret war against the alien Reptoids.

A scrapped promotional photo of the floating Hubbard Head in action.Methodology: Scientologists are nothing if not devious. They seem incredibly friendly and open, frequently inviting you into their homes to drink hot chocolate or cider, to date their daughters, and even to marry them. However, this is all a clever ruse. Behind those handsome velvet paintings of wide-eyed Mexican children lurks an almost unspeakable darkness. Crab-like they chatter in their subterranean warrens, clutching mewling human infants and tearing them apart with powerful crushing claws before sucking them noisily into their chitin mandibles. If the doomed babies are consumed in large enough quantities, an apparition of L. Ron Hubbard will appear to them, multi-tentacled and swirling, an indescribable mass of geometric horror. The Scientologists will raise their large claws skywards and sometimes, on a quiet night, you will hear their eldritch call rise from the sewers and caves, "IAAAAAA! IAAAAAAA!"

Capabilities: In almost every way the Scientologists are well-equipped for war, conventional or otherwise, and have the fanaticism to deploy their arsenal but the patience to know when the time is right. They wait as the world directs its attention to the more visible threat of the Taliban and other extremist terrorist groups. According to the few agents who managed to survive infiltration of the Church of Scientology, we discovered that their impressive resources include the following:

Final Analysis: While the United States is devoting all its time, energy, and attention to eliminating the threat of terrorism, Scientology will grow even more. If the Church is allowed to bloat unchecked it will soon burst forth like a hideous boil, spilling legions of flying lobster soldiers onto an unsuspecting mankind. We cannot forget these cruel masterminds in the midst of this tragedy. They are usurpers of our very souls and they will rob us of either our humanity or our lives, leaving us the choice. This cannot continue!

The Taliban must pay for harboring terrorists, but let us not forget that another, potentially more dangerous, enemy lurks within the borders of our own nation. Unless you're from Germany, of course. I think for once their book-banning policy did some good when they outlawed Scientology.

Master of many moves in and outside the ring El Pinto Grande has informed me via "computer message" that he has updated his "computer book". More specifically he has added responses to the fan letters he has received.

Do not try to trick me with your games Sano Tornado Papuan! I am knowing of your reputation inside the squares circle for molesting the rules and carousing with the worst of the crowds. I suggest you turn around and go back to the Austria where perhaps the wild rulings there might be making a little bit more towards your liking. It is a dark day in the city of my heart when you are drinking the Pepsicolada and enjoying the pages of relaxation in my computer book. If ever I am seeing you again in the city squares I will make to go with the whipping of the face with my hand's backside. These are mighty blows not-even-approaching-status-of-friend and I will shrink you down in the boots with some fury and a cup of punishing fists.

Holy moly, looks like El Pinto Grande has found himself in a hornet's nest of controversy. Check it out!