Doctor Science Professor, on the scene!

New Plans for a New Day

It's common knowledge that the online advertising market has taken a dramatic nosedive lately, plunging into figures so depressingly low that countless numbers of companies and businesses have had to close up shop and declare bankruptcy. Recent marketing figures are so far below predicted levels that even the most negative industry analysts have been caught off-guard. For example, take a look at the projected advertising income for the remainder of this year: 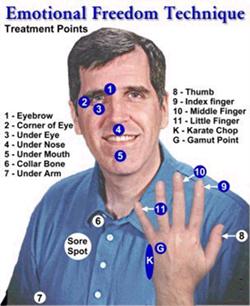 As you can tell by this diagram, companies are continuing to shy away from the online advertising economy, instead deciding to invest in more "traditional" means of promotion such as radio announcements, television commercials, and the "sore spot" near the collar bone of oddly feminine men. In an intensely competitive industry like this, websites are forced to constantly adapt to merely survive. With these grave figures in mind, Zack and I have decided to change the direction of Something Awful to something which hopefully results in an improved profit margin so we can stay afloat in this sea of uncertainty. While unproven self-proclaimed "humor" sites hardly ever pull in enough profits to even pay server bills, the standard knowledge-base and informational webpages boast a comparatively greater lifespan. Our newest attempt to keep Something Awful alive and kicking has caused us to veer in this profitable direction and hire the services of America's most popular brainiac, Doctor Science Professor. I'm sure all of you out there are familiar with Doctor Science Professor, a genius with an IQ of over whatever the current "really high IQ score" is, a man who has appeared in thousands of talk shows across America, sometimes even as a guest. Doctor Science Professor has authored 38 books and publications, ranging from the New York / Scranton Timez Bestseller "Molecules: Just a Bunch of Gay Atoms" and the ever popular children's favorite "Ronnie Radiation and the Carbon Rod Rumpus Room." Doctor Science Professor will periodically update SA, answering your most pressing questions and allowing our site to appeal to a larger fanbase. Without further ado, allow me to present Doctor Science Professor's first question and answer column!

Hey guys and gals, what's up! This is your ol' pal Doctor Science Professor! Please give me a big fat welcome to this website, because I'm here whether you like it or not! LOL! Just kidding guys! I've got a batch of questions on the ol' science stove, just waiting to be answered! So let's jump right into the ol' Molecule Cauldron (that's what we scientists use to store our chemicals and stuff) and get cracking!

Hi, my name is Emily. I am 12 years old. You came to my school and visited and did a lecture about turtles and evolution and then my teacher came back from the restroom and you crawled out the window and ran. I had a question I wanted to ask you. My friend Jenny saw a turtle at the creek and she said it had two red spots on its face. Jenny said that means the turtle has AIDS. Is that true?

I strongly deny ever appearing at Kingston Elementary School, so you can tell Miss Stephens that the person speaking there was most certainly not me, as I had a dentist's appointment at 2:00 that day and the car in the parking lot wasn't mine because my brother was using it then. With that little disclaimer out of the way (the word "disclaimer" of course deriving from the ancient Egyptian words "discla" and "imer" which mean "to deny any wrongdoing" and "in the Kingston Elementary School"), let's proceed to your original question!

Turtles are nature's dinosaur, an evolutionary descendant of the now-extinct "Marlmilia" family of rodents which originally inhabited Northern Ireland back around 50,000 BC. The members of the Marlmilia family included such remarkable animals like: 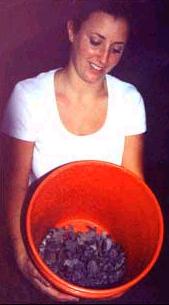 Hundreds of baby turtles attempting to hide from their natural enemy, the dreaded Bird Woman.

The exciting and wonderful trait that all Marlmilia members shared was their ability to grow a protective, shell-like cover which we scientists referred to as a "shell." These shells were able to protect the animal from predators, harsh weather, and most forms of deep space travel. When enclosed inside their shells, the animal could live for over 400 years by inverting their internal organs and feasting off the microbes in their pancreas (which is where the word "pancake" originally comes from). The standard box turtle, which you are undoubtedly referring to, shares many traits of its doomed brethren, including an elongated pancreas that allows it to store tiny deadly microbes which are then released from - you guessed it - the two red spots on its face. These microbes can infect humans with a nasty ol' disease known as "Spastic Hymen Syndrome," resulting in effects that range from "instant death" to "instant death that stretches out over a period of 80 years or so." Animal activists recommend taking the law into your own hands and using your parents' gun to thoroughly kill any member of the Marlimila family, including ones which have disguised themselves as your favorite sweater or dog. Happy hunting to you, Emily!

I live in East Kupapa`u in Hawaii. Recently there's been a lot of science people here looking at the beaches and claiming that there could be some big lava eruption or something. My husband and I own a small business a mile from where they were looking and we're getting kind of nervous since our entire income is based around selling t-shirts which read "I got crabs at Melvin's Crab Hut." Do you think we should move? 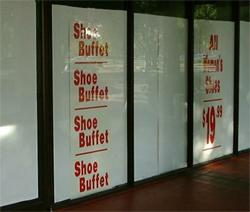 This might not be lava, but it is fantastic savings so be sure to head out to The Shoe Buffet on Henderson Road in downtown Appleton City for the best deals in fabulous footwear!

You don't have anything to fear! I have a major in Volcanic Studies from a university which I'd rather not name at this point since they are under Federal investigation. We volcanists have spent, I don't know, months and months studying volcanos and lava and Draw Poker. Lava is one of nature's most misunderstood phenomenons... in fact, the Spanish word "lava" is composed of "la" and "va," which translate to "(female) the" and "goes." Merely combining these two words together forms the phrase "(female) the goes," which shows that lava is a woman just like you and goes places... that's correct... just like you! In an age of hatred and ignorance, I don't believe we should discriminate against a form of nature that is so much like us. The country of America was made great by the fact that men, women, and children could all get together and be united in the fact that none of them lived under the ocean. Here are some popular misconceptions about lava that I would like to clear up so your fears may be soothed:

Lava has not, nor has it ever, destroyed anything. Lava is simply superheated water which quickly cools to form pressurized oxygen molecules. These molecules are then used by natives to build houses, dams, dental implants, and even Mariah Carey compact discs!

Lava is a life-sustaining nutrient for over 19,000 different animals ranging from the Bowlegged Grease Ferret to the mysterious ice clam. Many animalologists cultivate and nurture lava farms in their own backyards.

Lava has been elected to the Hawaiian presidency over 19 times, constantly defeating the Democrat incumbent.

So turn that fear upside down, Hawaiian lady! If anything, you should probably move closer to the beach so you can forge an intimate bond with our magma pal and be the first one to reap the benefits when it spews forth from the Earth like rich, gooey, chocolatey oil! Only it's a lot hotter and oil belongs in car, whereas lava belongs in a lamp!

My nephew and I have been arguing about momentum in non-relativistic objects. He claims that for any particle with a non-zero mass, the momentum gets larger and larger as the speed gets closer to the speed of light, resulting in infinite momentum if it can reach the speed of light. I think that the Packers suck and momentum is for pussies. What's your opinion?

PS: I saw you at the last Comedy Def Jam. I hope you've had enough time to heal since then.

Notable scholars like Thomas Einstein and Ed "Curly" Perkins have been wrestling with theories of special relativity for years now, although considerably less once they stopped living. The speed of light is indeed an interesting concept, as it's hard to believe that light, which lacks any legs or forms of vehicular transportation, is somehow able to move like a drunk Shriner inside a Denny's. I myself have attempted to capture light inside a Mason jar so I could study it, but problems arose when I realized I didn't own any Mason jars. The concept of "light" is a tricky one, so please allow me to proceed with caution while I explain my theories regarding energy, mass, and relativity:

Well it looks like that's all the time I have for today! Stay tuned for another exciting column of "Ask Doctor Science Professor" once I come off my upcoming book tour in East Lansing. You can catch me at the Rally's from 3:00 to 3:19 and Ed Bukowski's Automotive sometime around 6:00. I'll be signing copies of my newest release "Canada: Debunking the Myth" and will gladly answer any questions you want to be answered! Until next time, stay safe and save stays!