SA: The element you inserted into the masks, containing deadly energy chiseled from a Stonehenge block, was stored inside a large metal insignia. Didn't parents complain about this; I mean, even before the killings?

CC: They did, when the insignias would fall off. And this inspired us to do fine work, for, you see, without that insignia, a mask is just a mask. We made up for some of the lost deaths by encouraging people to reattach the chips themselves. We were one of the first companies to feature tamper-proof craftsmanship. Whenever someone attempted to tamper with our programming, they'd have a spider inserted into their mouths by way of a face-melting laser blast. This method all but eliminated unauthorized modifications.

SA: Insects seemed to be essential to your operation. During the test run, the child's collapsed head started spewing not only snakes but also what appeared to be hundreds of crickets and beetles.

CC: That was just a bug in the program! Ho ho. All jest aside, the insects were designed to spread the black plague. Also, we planned to sell any non-infected insects as food, either to falconers, or to the hawks themselves. 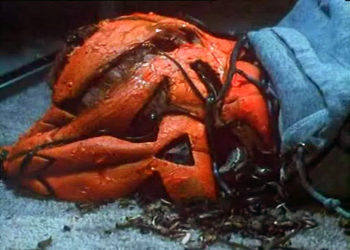 SA: Your use of an all-android workforce didn't seem ... efficient. For example, you used your robots to handle all administrative duties, and you used them for suicide missions, even when suicide didn't seem at all necessary.

CC: We were one of the first corporations to take out life insurance policies on all our employees. And suicide is notoriously difficult to prove in the case of androids. As you saw in the film, it took a trained lab technician a week to even ascertain that those were the remains of a robot inside that burned-out car. You'll also notice that the cyborgs always wore gloves. This is because their fingerprints are traceable, much like computer IP addresses.

It's important to note that while androids are relatively expensive to construct, we pay them no wages or benefits. And they're willing to accept tasks human employees might question or perform begrudgingly, such as decapitating loudmouthed vagrants or allowing yourself (as a young woman) to be manhandled by an old, burly doctor.

SA: I've always wondered why you filled the robots with what appears to be egg yolk.

CC: That is an all-purpose internal secretion we use for many functions, from sneeze leakage to intercourse lubricant. This substance is of course highly toxic, as Dr. Challis learned just a few weeks after his trysts with our "Ellie" model. He was a worthy adversary, and I hated to see him go that way. Very unpleasant, the withering.

SA: Well, I think that's all the questions that I have. Do you have any messages for our readers?

CC: You should fight the crass commercialization of hallowed Samhain by saving your money and buying only a simple mask, like a witch, pumpkin or skull. Sacrifice a child if you find a chance. Oh, and... happy Halloween.

SA: I'm sorry, I just remembered something else I wanted to ask. What are your thoughts and opinions regarding Michael Myers?