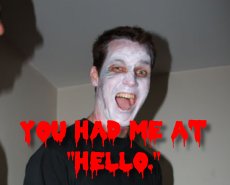 A guy in a Frankenstein costume meets a guy in a Wolf Man costume at a Halloween party and they fall in love; the Wolf Man is the only person with whom Frankenstein can share his feelings and not feel dirty afterwards. They share many intimate evenings where they make out awkwardly and say awkward things that are all the more precious for their awkwardness. Frankenstein loves the Wolf Man more than hope. But then the Wolf Man slowly drifts away, sealing the entrances to his heart one by one until Frankenstein is a broken skeleton of a person.

Don't Go in the Cellar

A girl tells her roommates not to go in the cellar because she just cleaned it. They go in anyway and track dirt on the floor and knock over her stuff and have sex with their boyfriends on the card table. They continue mistreating the girl for several years until they move out because they've found high-paying jobs. The girl still has a waitress job and struggles to make ends meet. 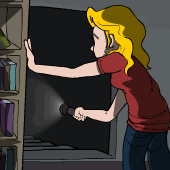 A woman divorces her husband and moves out of their house. While packing up her books, she sees one she's never read before. She touches it and the bookshelf moves, revealing a staircase. She goes down it and finds herself in a dank, musty room. She thinks it's a catacomb, but then turns on the light and sees it's just the basement. She looks at the old furniture, old clothes and boxes of old photos; souvenirs of a once-happy marriage, left to mildew and rot. She realizes it's a catacomb after all.

A girl spends the night at her aunt's house and has to sleep in a room with an evil-looking doll. The doll scares her, so she goes to a bar a meets a guy and has sex with him so she can sleep at his house. The sex is good but she knows it's meaningless. The next night she cuddles with the doll just to fill the void.

A lonely man calls a suicide hotline. His voice sounds like the operator's abusive ex-boyfriend, so she calls him a jerk who thinks women are just there for him to exploit like an oil well or the laws of aerodynamics. Her rant sort of turns him on because it's the most attention he's ever gotten from a woman. He wants to ask her out, but she hangs up.

A girl has an action figure of the Pokemon Golem on her bedside table. Her room becomes disheveled as her life falls apart because of drugs, but the Golem still stands vigil over her bed and smiles. Eventually the girl's roommate kicks her out. While packing up her stuff, she accidentally knocks the Golem off the table. As she closes the door, a glint of light catches on the Golem's broken face.

After watching Stephen King's The Mist, two friends wait in the theater for a third friend to pick them up. They want to talk but can't because their friendship has atrophied since high school, where being outcasts kept them together. Now all they have in common is their love of horror movies, and even that wanes with every bad Stephen King flick. Their friend picks them up and asks how the movie was. "Terrible," one of them says. "It started out promising but got really bad midway through." He realizes this description applies to a lot of life.