The Sentinel Was Certainly A TV Show

The late 90's were a magical time for vaguely science-fictiony television shows with generic bad guys shooting submachine guns in a near-future utopia. Well, the last part probably wasn't intentional, but since these shows were set in the U.S. and filmed in Canada, everything seemed futuristic and idyllic by virtue of being clean.

For my money, the shining standard of this sort of show was The Sentinel, which ran from 1996 to 1999, and can currently be caught on cable tv at the precise time in the mid-morning that should make any adult feel like an asshole for watching television.

The Sentinel featured Richard Burgi as - 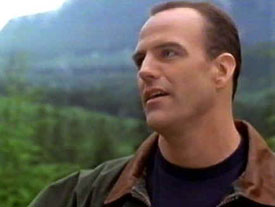 Jim spent 18 months in the jungles of Peru after his unit of U.S. Army Rangers was killed. You'd think that picking a direction and walking would get you out of there in a month at most, but you know what they say about hindsight.

Naturally, spending all that time sleeping on dirt and eating bugs granted him MYSTICAL POWERS which are specific to places in the world where people live in tribes rather than cities or trailer parks.

Jim can basically use all five of his senses with way more effectiveness than a normal person. Distant objects can be seen with startling clarity (this was before HD shades came out so it was a big deal), heartbeats can be heard through walls, and pizza tastes incredible.

Basically, he is the world's greatest tracker, and the world's worst surprise party recipient.

All of these skills come in handy, as Jim is now a detective. Specifically, the sort of detective that exists purely in movies and television. He can pretty much go wherever he wants, take any case that interests him, and spend all day cooking in his ridiculous apartment for beautiful women who almost exclusively wear pantsuits with enormous shoulderpads.

He even gets to choose his partner - 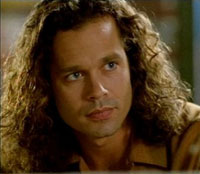 Blair is such a 90's dude. He's smart and fairly clean shaven and can't fight, but he's got a grungy side because he has long (pretty) hair, wears leather jackets and shell necklaces, and occasionally ties sweaters around his waist.

How did Blair come to be Jim's partner? Through an amazing coincidence, he happens to study the specific phenomenon that grants mystical heightened senses to people who become lost in the Peruvian jungle. Since Jim tends to enter a catatonic state when he exerts his powers too much, he makes Blair (an anthropologist) his partner, to help him understand and better harness the mystic abilities.

I might not be remembering this correctly, but since Blair is a smart guy, he probably hacks computers when microchips need to be decrypted or FBI databases need to be cracked and downloaded.

Rounding out the regular cast is Jim and Blair's captain -

Imagine what a captain would be like on a show like this. There, you're absolutely right. Banks gets mad at Blair and Jim. He yells when things go wrong, he demands results in impossible timeframes, he threatens to pull people off of cases.

He's also a nice guy, though, as is evident when he puffs on a cigar and laughs, or when he does his best half-hearted "why I oughta" expression at the end of an episode when one of the guys teases him as they walk away from a crime scene, dozens of bad guy corpses in their wake.

In a typical episode of The Sentinel, someone within a large company (usually a woman) accidentally comes across a secret evil plan, then survives an attempted attack by their evil boss and winds up being protected by Jim. I'm not sure what sort of detective that classifies Jim as, but I bet his card is huge.

Some of the episodes really stretch to shoehorn Jim's heightened senses into a conclusion. For instance:

- A bad guy is standing behind an innocent woman with a gun to her head, ensuring his escape. Jim uses his incredible hearing to pick up on the bad guy's heartbeat, locating it so he can shoot the bad guy in the heart and save the day.

- Jim uses his heightened sense of touch in a diner to determine which pot of coffee before him is hot, then splashes that pot of hot coffee on a bad guy.

- In a crowded dynamite expo, Jim's super smell allows him to sniff out the nervous fart of a mad bomber.

- Using his amazing eyesight, Jim figures out who murdered a CEO by spotting a guy holding a small sign reading "I killed the CEO" in fine print from a great distance.

- After a bad guy punches him in the mouth, Jim licks his lips and realizes that it's the same bad guy he tasted when he licked the recovered shipment of stolen plutonium rods.

As if things weren't convoluted enough, the limits of Jim's powers were continually expanded upon as the series went on. At one point they decided that he needed the ability to talk to ghosts (suck it, Jennifer Love Hewitt), chill out with a spirit animal in the form of a jaguar, and bring people back to life.

I suppose it's a good thing that the series only lasted three and a half seasons. It was oddly fun while it lasted, but if the series had stuck around for a few more years I'm sure Jim and Blair would have been battling the Taliban (guys in shades shooting uzis) by traveling through time and shrinking to microscopic sizes.

Actually, nevermind. It's a shame the show ended when it did.