More Horrors from the Bradford Exchange

One of my favorite things in the whole wide world is the Bradford Exchange, which is basically a large factory that mass-produces the gaudiest of nonsense imaginable and then sells it online or through mail order ads. Not unlike a bear eating shit and then shitting shit, the Bradford Exchange takes in a wealth of kitsch and cliché influences and then makes them into lousy art. We're talking Jesus riding on the back of an Eagle insane. Somehow, probably because people are stupid, these hilariously absurd collectibles sell like gold-plated hotcakes at a lumberjack convention.

In the past I wrote about the Bradford Exchange and a few of their funnier items. This week I'd like to take the time to review some more of their fine and inspiring works of art, as I believe them to be a well that never runs dry. It is hard picking out the worst items on the Bradford Exchange website, because no other company would put a collectible plate of Pope John Paul II right next to a guitar-shaped Elvis plate. That's class few can muster. 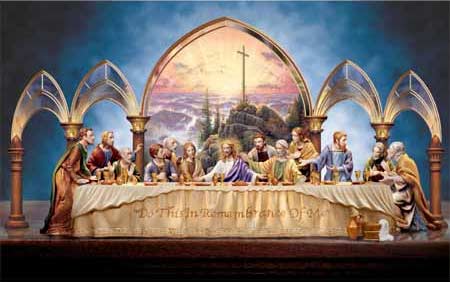 Thomas Kinkade's The Last Supper
The Painter of Light is a much-maligned figure around these parts, as well as the sane world at large, for his repetitive and unimaginative paintings of the same five things. Naturally, he fits right in with the Bradford Exchange, a company fixated on eagles, Indians, firefighters, soldiers, flags, dogs, and so on. Here Thomas Kinkade tackles one of the most daring subjects: religion. He does so, as you might expect, without any imagination, merely recreating Leonardo's famous painting except with a new and mysterious backdrop that looks strangely like an existing Thomas Kinkade work. Way to subtly sneak in a preposterous and egomaniacal anachronism, Kinkade.

The great thing about this set is that it is basically a collection of figurines, so you can move them around and create your own scenes. You can even add in other figurines to create new inspirational Bible scenarios, such as Jesus dining with Cobra Commander or Spider-Man lifting Judas over his head. Each figurine is made of gold-polished porcelain baked inside of Thomas Kinkade's smoldering asshole of despair and shines with all the vibrancy your little heart can tolerate without having a stroke.

When they come out with an edible chocolate version of this set I will be purchasing two dozen. 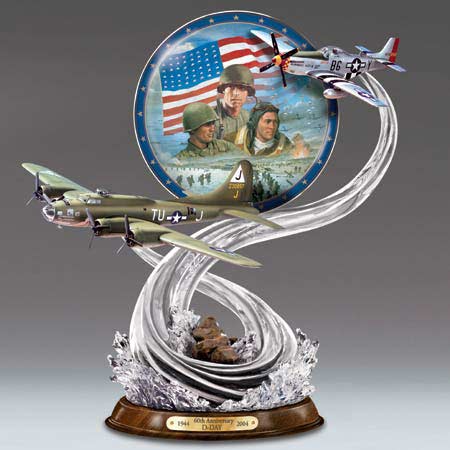 This is an accurate accounting of the horrors of the Battle of Normandy, which saw over 50,000 men die and 18,000 disappear never to be found again. This macabre figurine, with its swirling and monstrous tendrils of water attacking two planes and a plate, validates the ungodly horrors of that day as never before. While a fair representation of the battle, I fear the disturbing image of the odious water tendrils that killed so many is likely to inspire violent flashbacks in the remaining D-Day survivors.

Unfortunately, the plate is attached to the rest of the sculpture, making it impossible to use for dining. This is a real shame, since it looks like an absolute beauty of a plate. 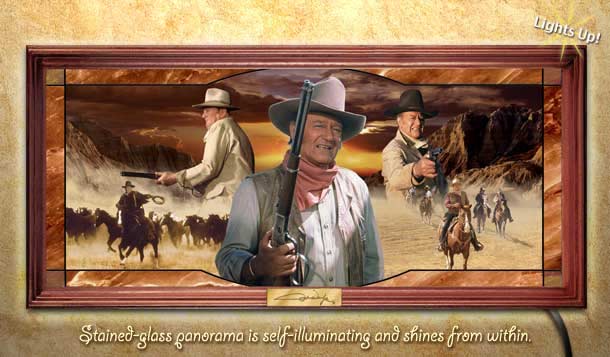 The Duke Light-Up "Wall Decor"
What better way to show your love of John Wayne than to purchase this glowing picture of him holding guns and riding horses. "Fuck yeah!" the kids will say upon seeing this glimmering tribute to the zenith of manhood. With five distinct images of John Wayne depicted you get to see him in all his multi-faceted glory, from gun-toting to rope-toting on horseback. The mythical Wild West never looked so bright and shiny. But then again, they did not have electricity or light-up picture technology back then. Now we do, so let's not waste any time righting the wrongs of the past by lighting up everything we can.

If you like John Wayne themed garbage, then you will like The Duke Express Train, which lights up and looks about as stupid as anything can possibly look. I recommend purchasing it alongside the Dale Earnhardt train and having them crash into each other as a form of silent protest. If all goes well, such action will become the new flag burning. 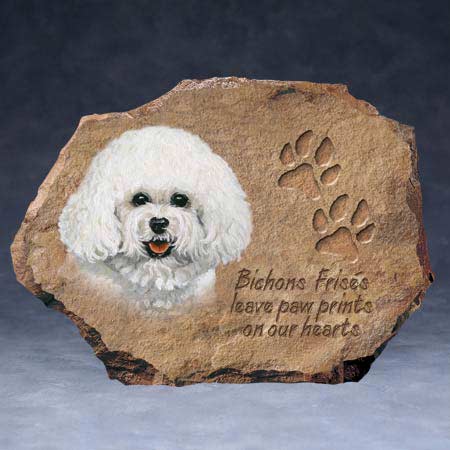 Canine Cardiologist Stone Tablet
This stellar tribute to the Bichon Frise is enough to make any person spontaneously vomit cotton candy. The menacingly adorable smile of the doggy coupled with the carefree "leave paw prints on our hearts" credo is enough to make me, a hateful scourge of a man, avert my eyes in panic, unable to fully absorb the cuteness before me. This is pretty much the visual equivalent of being sodomized by a rainbow while a pony stomps cupcakes into your mouth. Granted, that is not a pleasant thing to visualize, but there is no other way for me to communicate how uncomfortable this silly thing makes me feel when I look at it.

Of all the dog themed merchandise sold by the Bradford Exchange, this is, in my opinion, the most harrowing and demonic looking. In fact, I dare say, of all the things sold on Bradford Exchange, this is the most harrowing and demonic looking. Even the "paw prints on our hearts" line sounds evil when you really think about it. What business does a dog have sticking its germ-ridden paws inside your chest cavity? I'm not letting this little Cujo get anywhere near me. I'd much rather tempt fate and leer at Medusa then look at this thing anymore than I already have.

Hop on board the Thomas Kinkade pain train and be sure to visit the Bradford Exchange website yourself and look around. I can promise you that within seconds you will find something that makes you cringe, and if not then you are a poor excuse for a human or quite possibly a senior citizen. If you are indeed a senior citizen then you are in the wrong place, as the Internet is only for those of strong vigor and constitution.