One of us is The Thing and it's not me 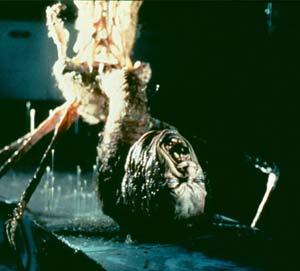 Listen, I've had about enough of you accusing me of being The Thing. If you recall, I'm the guy who first pointed out we have a Thing situation going on here. That was last week, remember? I said "Guys, the Thing is among us, and we'd better act smart lest we both become victims of The Thing."

If I was The Thing, would I really draw attention to myself? No, I'd just wait until your back was turned and spit out a few gross tentacles to devour you, or grow a giant alligator mouth out of the side of my head and bite your face off. That's the sort of shenanigans The Thing does, and I haven't done any of those things.

You on the other hand have been nothing but Thinglike in your behavior. Sure, you haven't grown any spider legs out of your head and started crawling around the ceiling, but I can tell you're itchin' to do that first chance you get.

Now I see you hemming and hawing about how you can't be The Thing because The Thing tried to kill you but you escaped by blowing it up in the nick of time. So convenient, Gary, that the evidence of your heroic deed got incinerated. Guess I'll just have to take your word for it, Gary... OR SHOULD I SAY, THE THING?

You say I'm the Thing? Hah! Just because I was alone with all those mutilated Thing corpses for a few hours doesn't mean anything. I didn't even know those Thing corpses were there until you mentioned it, because I was busy doing important work on the science computers in there. I was trying to get us rescued, Gary. Besides, The Thing knows better than to mess with me.

Do you have a college degree, Gary? I do, and you don't. Which one of us is more likely to be The Thing? The smart, college-educated guy, or the dumb guy who goes up and tries to pet The Thing because he thinks it's a friendly varmint?

I'm simply too smart to fall victim to The Thing's crude, animal-like scheming. That's why you haven't gotten the best of me, Gary. I'm pushing you into increasingly tiny boxes with my rock-solid logic. Yep, you're boxed in, and any minute now you're going to unleash some otherworldly shriek, then start spinnin' your head like a helicopter while spewing gross fluids at me. Typical Thing bullshit, Gary.

Let's face it, Gary, The Thing would never be able to realistically portray a nuanced individual such as myself. And if I was The Thing, I would simply overpower you right now by using any number of amazing Thing abilities. In fact, one might say I'd scarcely be able to keep my cells from seeking out yours and assimilating them. That's what Things do, Gary, and you should know that since you are one.

If you weren't The Thing, you wouldn't keep asking me why I'm the only one who gets to use the flamethrower around here. Well, it would be mighty stupid of me, the last living human in this outpost, to entrust his safety to the very hideous abomination that wants to kill and assimilate him on a cellular level. I ought to set you on fire just for thinking that, Gary, and I will just as soon as you stop being a dickhead and reveal your true Thinglike nature to me. 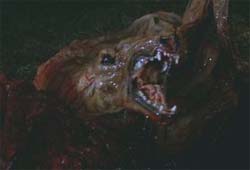 Go on, Gary. Thing up. Thing your heart out. Stretch your neck out eight feet, split it open to reveal a mouth, then have a little skinless dog pop out of that mouth and bark at me. You know you want to. I can see it in your eyes, which are just seconds away from bugging out of your skull and sprouting tiny little bat wings.

God you Things make me sick. We had a great little thing going here in our remote research station before you showed up and ruined everything. Do you realize how much your stupid Thing antics are costing the federal government? That's just the monetary loss, which is nothing next to the huge scientific setbacks you are causing every minute you spend terrorizing me instead of transforming into a horribly disgusting monstrosity. I could be curing cancer right now, Gary, but no, I'm busy tying you up and waving a flamethrower in your face.

It's amazing that your awful kind are even capable of building spaceships. You spend most of your time mimicking dogs and growing giant mouths and spider legs out of your head, for Pete's sake! What the hell kind of civilization is that, anyway? I don't understand how any of you managed to build a UFO, let alone keep from trying to mate with it, or whatever it is you awful creatures do when you see something you want.

Maybe on your backwards planet it's acceptable to just open your chest up and shoot a big load of prehensile tongues at people like some kind of super-powered pervert, but we have things on this planet called "manners" and "politeness." We have "jobs" and things to do, and we can't spend our time lollygagging it up as grotesque mounds of disfigured bone and viscera. Quit acting like a fake human being and act like a real one, Thing. Get a job and make something of yourself. Contribute!

You probably think you've got me cornered. Listen up, you smarmy Thing bastard: nobody outsmarts me! I went to college and I have a flamethrower! I've got dynamite in my bag and I'll blow us all up. So shut up, Thing-Gary, and start mutatin' already so I can toast you. Sprout your little noodle arms and try to choke me. Go on! I'll rip 'em clean off with my bare hands. That's how dedicated I am to the cause of defeating The Thing once and for all.

All right, Gary, you've pushed my buttons one too many times. It's time for Plan B. I'm going to take this big ol' bundle of dynamite, see, and I'm going to hold it stupidly close to the pilot light on my flamethrower. If you don't transform into The Thing for me right now, I'm going to dangle the fuse over the pilot light like so and