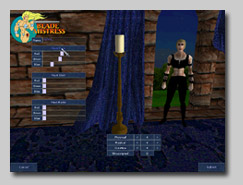 At a Glance: Blade Mistress is a fantasy MMORPG set in a vague and unremarkable realm of adventure which is populated by a clone race of female fashion victims known as the Blade Mistresses. Not surprisingly you take on the role of one of the titular heroines and journey across a landscape that is extremely flat and sectioned off into squares. Hundreds of monsters loiter menacingly in wait for you to accidentally walk in the wrong direction because the controls are so horrible. There are skills which you can improve through use, many of which have an inscrutable purpose and an even more inscrutable way of denoting proficiency. 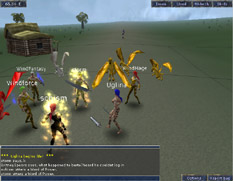 If you're having trouble figuring out which of these fine ladies is me you're not alone.

It is a great reassurance about the quality of a game when the official webpage's title at the top of your browser window is "Untitled Document". It's as if the makers of Blade Mistress at Aggressive Game Designs are saying "this game is so good your browser doesn't need to know what it is". At the very least you would hope that it means they're spending a lot more time actually working on the game then they are designing a fancy webpage. Unfortunately for everyone involved with the production, testing, and playing of this game, this is not the case.

My experience with Blade Mistress started at the web site, where I downloaded the small client and installed the game. My first warning sign, not including the horrible web site, was that it used a DOS client to patch when I first connected to the server. After an extremely long wait the patch completed and I logged in for the first time to create my character. Character creation is fairly deep, with a total of three attributes and one model for your character to choose from. That's right, there is one player model, and it looks like a cross between a robotic supermodel and a mummy. You can choose from a few different hideously ugly faces and then fine-tune the colors on her tattered clothing to your liking. I created a warrior (there are no classes or levels, but I put all my creation points in strength) with the incorrect assumption that player types would be balanced.

The graphics look fairly similar to Everquest if you are viewing your monitor immediately after being sprayed in the face with mace. As I teleported into the world of Blade Mistress I was struck by the number of nearly identical characters all around me. According to the unintentionaly hilarious FAQ on the Blade Mistress site the similarities are completely intentional.

So, we looked for ways to cut down the amount of artwork we'd need, and one way that seemed logical was to have only one size, shape, and gender of avatar.

This is all well and good if you don't care about things like "establishing an identity" or "interesting player interactions" in an MMORPG, but the fact of the matter is there ARE other human models in the game. All of the shopkeepers and trainers are the same identical male models wearing helpfully color-coded clothing. Also by shopkeepers I mean "shop loiterers" since like just about everything in this game they're just standing around in an open field next to some log cabins you can't go inside of.