Too Much Information: The 59 "NC-17" Citations for "Bad Lieutenant" 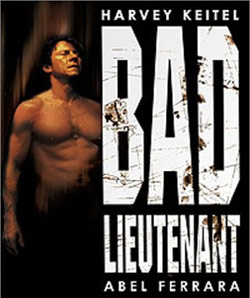 When Bad Lieutenant was released in 1992 the groundbreaking film stunned audiences with its shocking and graphic portrayal of an aberrant police lieutenant. Critics received the film in much the way they might receive a mouthful of vomit during a kiss with a beautiful girl. Even those critics normally attracted to art house cinema considered the movie to be so relentlessly nihilistic that it was difficult to recommend.

Some critics did manage to come around on the film, but one group never viewed Bad Lieutenant as anything other than abject filth: the Motion Picture Association of America.

The MPAA's ratings board slapped the film with a "hard" NC-17 and forced director Abel Ferrara to make a number of deep cuts to get the movie to an "R" rating and larger theatrical release.

After months of digging, I have managed to discover the list of NC-17 citations given to Ferrara by the MPAA. This is the list of citations that qualify the film for an NC-17 rating. Any one item on the list was enough to earn it an NC-17 rating and Ferrara was forced to cut all 59 things out of the final film.

Today, for the first time, the world will learn what Bad Lieutenant might have been!

1. Bad Lieutenant's scrotum stretched out to create a "Tijuana Trampoline" for a Mexican jumping bean

2. Drugs or alcohol injected into a baby for luck

3. Part of a skeleton's hand hidden inside a vagina

4. Four instances of the unutterable profanity, which cannot be reproduced here

5. Turtle made to eat its own vomit through trickery or special effects

6. More than one consecutive minute of a man staring into the camera

7. Ghosts portrayed as real and/or consulted as experts

11. Semi-automatic weapon discharged inside a well or cistern more than twice

12. Destruction of federal property in the act of intercourse

16. Babies utilized as the subject of an auction or in a barter transaction

18. Locomotives constructed prior to 1990 participating in a wedding ceremony

21. Bad Helicopter appears with the word "Fuckwagon" painted on the side

22. Bad Helicopter appears with a realistic image of a woman defecating on a rattlesnake painted on the side

24. Ritualized torture and murder of a notary public

25. Depiction of a crab or lobster notarizing official police documents