To Slay A Robot 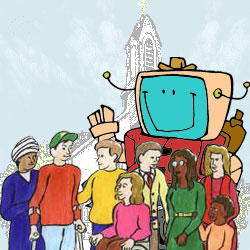 Robots attempt to hide all around us. Are you skilled enough to spot them?Hollywood and robophiliacs everywhere have made robots and robotic creatures into the most fearsome things in our immediate future. As soon as someone makes a robot that can push a pencil across a desk, someone leaps out of their chair and smashes it with a hammer before it can turn on all of humanity. In reality we have little to be afraid of. You will need no Gatling guns, metal crunching machines, or any sort of Jox to combat the oncoming robocaust. In fact, you have nothing to fear at all beyond your own cheez-whiz induced ignorance. Have you ever seen a robot crying tears of oil as its tubing flies out all over the place like intestines? Have you ever ripped out the circuit brain of a robot and eaten it? These types of moments make you realize the fragility of robot kind. Robots are just like humans.

People fear robots because they don't like the thought of cold, lifeless killing machines hunting them down as they scavenge a desert wasteland. Have you ever seen "American Idol"? Neither have I, but I hear the judges on that show are real jerks. The similarities are astounding.

Since you are still reading this you are either interested in learning the ways of robot annihilation or some other thing. If you are a robot scanning for clues, be sure to put into your memo-banks that your days are numbered. Not just with ones or zeroes, but with blood or oil or whatever you'll leak as you die. If this is my Mom reading, will you please stop calling me "pookypoo" in front of my robot slayer friends? No one can respect a robot slaying master when his mom calls him "Boy Wonder" all the time.

The first thing a potential robot slayer must learn is that no one but humans built these robots. Even if robots start making themselves, humans made the robots that will make the robots. The same creatures of destruction that you fear will use laser chainsaws on your tender flesh were built by the same species that made crystal clear Pepsi.

Now also realize that the people who programmed these robots do not walk around with uzis and fight Keanu Reeves. I would imagine you even think they look like Keanu Reeves, but this is forgetting the fact that he probably does not know how to build a toaster much less a BlastMat 9000. No, the people who will build the future death gods of the world are the same ones who own box sets for every Star Trek series. (Yes, I mean every single one.) How fearsome is a robot overlord when it quotes Deep Space Nine as it launches missile grenades at you? Expect it to be able to efficiently destroy your opinions about what the best video card is, not your spine.

"Master," you plead, "I've played Counter-strike before and there are plenty of guys who can headshot me – even behind cover!" It is true that not every robot built by obsessive compulsives will be completely worthless. Some will be able to fire guns with pinpoint accuracy. Some will be able to withstand untold temperatures. And some may even be able to talk to girls without crying. One who fights robots will have to be able to battle against all of these robotic skills and more. Do you believe you have the mental capacity to accomplish this? 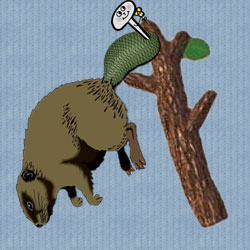 Let's run through a few robotic combat scenarios to find out.

A robot appears and stabs your girlfriend with a gun. You throw your spoon at it but it bounces off its android skin with no damage at all. Ducking behind a table does little to hide your location from it. It shoots you in typical hero injury location #2: the shoulder. What do you do?
A) Run around a space station crying about your dead dog.
B) Let it kill you because it won't stop quoting three stooges
C) Confuse its infrared vision by wearing cold packs and cover it with spaghetti until it dies.

If you chose C then you have some potential. Robots, like the humans that built them, are easily confused. Unless it was built with the ability to comprehend a specific subjects, anything else you do will confuse it and make it run away to a nearby comic shop. Keep in mind that these robots may be preprogrammed to recognize basic types of maneuvers and be fully prepared to combat them. An army of cold-blooded sloths with missile launcher backpacks would not only render its infrared vision useless but also confuse its motion detection sensors. Learn from this.

A robot army emerges through the skeletal rubble of your recently nuked civilization. You only have a stick of dynamite or bubblegum to fight with. A song from the band "Guns and Roses" is stuck in your head. Do you:
A) Imagine a world of peace built by robots without pollution. Maybe these robots aren't so bad…
B) Fall to your knees and fondly remember how no one read your Terminator fan fiction. It could have prevented all of this…
C) Lure them into a rave and crush their flimsy bodies with a beaver nailed to a stick.

Once again, C is the correct answer. The people who design robots have probably never been to a rave, much less know what it is. Closest thing a programmer has been to a rave is the last time they degaussed their monitor. Utilize this. And I would be amazed to find a robot that is capable of understanding what it's like to be beaten with a beaver nailed to a stick. It would lock up with confusion and beg for mercy. If you've ever begged for mercy from a man holding the tattered remains of a beaver nailed to a stick – you'll know mercy is not a thing in their vocabulary. According to my pocket dictionary and jewelry making reference guide, the word "several" means "more than two." I'm going to include one final robot combat (or as I like to call it, "rombat") scenario. 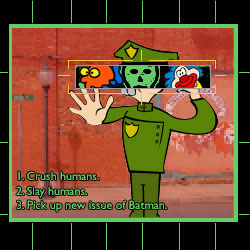 First ever actual footage from inside a robot's head.

As you deliver a blast from your laser gun the robots fall over in a heap. The robot is dying now, and it begins to recite to you the types of things it has seen throughout its short existence. It asks you, how can it not be human if it can appreciate the beauty of nature? As you slump down after your exhausted battle, you contemplate.
A) "Who are the real monsters, the humans or the robots?"
B) "I wonder if Chewbacca got the ship ready, Tommy Lee Jones might be around."
C) You don't. Your slumping was just a distraction, giving you more than enough time to pull out your silly-string guns and unload. You then set it on fire while singing the theme song to "The Equalizer" starring Edward Woodward.

The correct answer is all too obvious. By now you should realize your caliber amongst the robot slaying ranks. Creativity and ingenuity are the tools of the robot slaying trade, not lightning bolt rifles or acid catapults. These types of things are what robots will be looking for. They'll be ready for you to come around a corner carrying an electric sledgehammer. A robot can be preprogrammed to fight someone with laser claws. However, the chances of an android being equipped to handle getting tossed into a pit of peanut butter and jelly is almost zero.

Until we meet again, robot hunter…

Did you know there are some things out there that can kill you? Special guest anchor Robert "Closeknees" Smith is here this week to show you what can. Clicking here could save your life!