A Slice of Lunar Pie, BURNT TO A CRISP 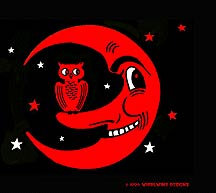 This is the best picture of the moon I could find. Unfortunately it contains a slight innaccuracy: gigantic space owls don't actually exist. Everything else is spot on.For as long as clowns have been smiling, the moon has been serving as Earth's little buddy in the cold, desolate frontiers of outer space. This sacred bond between the Earth and the moon is one of the few things in this universe we can truly appreciate. Through good times and bad, the moon has been our stalwart companion and faithful friend as we sail through the vacuum of space. I can think of no better friend to man than the moon. Dogs? Forget them! Take them out and shoot them all! How dare they be so naïve as to cast themselves in the same precious light as the moon! One of the good things about our celestial roommate is that it belongs to no single man. It's sort of the communal property of the human race, and everyone – save for those deranged mole men from the Earth's core – has equal chance and privilege to gaze upon the moon.

Some of you will argue that I'm living in an idealistic fantasy world, probably because I still believe in mole men. My feelings and beliefs on this matter run a lot deeper than even the Earth's core, though. I'm not saying that the moon is some prized treasure that should be looked at but not touched, because that would just be stupid. I'm saying it's something we should all conquer together, with guns blazing. The moon is a valuable resource ripe for exploitation, and the sooner we start exploiting, the sooner we all start benefiting. The point is that we should be doing this together. The Native Americans once held that the lands belonged to everybody, and they could no more be owned than the air we breathe or the sky we pollute. In time, we taught them the value of the dollar. Now it's time we repeat that lesson again with the moon, and unlike last time we won't leave anybody behind. If we stand united to do one thing as the human race, let that one thing be ruining the moon.

Unfortunately somebody had the audacity to begin turning the moon into a pile of money for selfish gain and without the rest of us. A Dutch entrepreneur, Rene Veenema, was recently arrested for illegally selling plots of land on the moon.

Veenema, who goes on trial next month, was quoted as saying he made thousands of people happy before his business turned sour. He claims he sold plots for around 1,500 euros ($1,600) each through the U.S.-based firm Lunar Embassy. 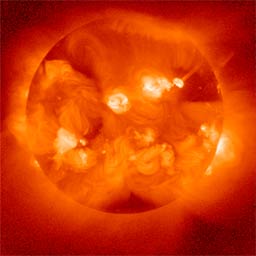 The sun makes everything possible, including birthday parties and go-carts. Now's your chance to claim a big scolding hot chunk!I don't know about you, but I for one can't even find the country of "Dutch" anywhere on a map, so it's clear he hasn't stopped being a scoundrel even while in jail. I find it most sickening that he was selling these plots to individuals. What are they going to do, build houses there? The moon is for industry, not for living. What's more amazing is the price people were willing to pay for a small chunk of real estate on a virtual stillborn of the cosmos. There is something to be learned from this, and that's that people are stupid and much easier to exploit than the moon itself, even though the moon is nothing more than a giant rock.

In sprite of his legal troubles, I can't deny that Rene Veenema made some good money selling dumb people things they cannot see, touch, or ever experience first hand. He was definitely onto something big. I too would like to make money tricking people. My dream has always been to either become a dastardly railroad baron or travel the country conning the elderly out of their life savings in an elaborate pyramid scheme straight out of Ancient Egypt. Of course selling people the moon is a pretty big cracker of deception salted with lies and intrigue. As big a ruse as it is, I can do one bigger.

I hereby announce Sun Plots, the premiere real estate agency selling quality land on the surface of the sun. The sun is not only much bigger than the moon in size, but is also the star of our very solar system. And yes, the pun is all over your face, fatty. Before I sell you the sun, I'd like to give you an honest look at what some other real estate agencies are offering in terms of outer space land. Let's start with, oh, I don't know, THE MOON.

As you can see, there really isn't much point in investing in the moon as in individual. The sun, however, is better suited for you! Allow me to show you the benefits of buying sizzling hot land from the same honest, objective viewpoint!

YOUR NEW HOME, THE SUN!

As you can see, the pros clearly outweigh the miniscule cons. The time has come for you to get with the hot ticket and purchase land on the sun. Don't think of this as a vanity purchase, think of this as in investment in the future. One day man will have no choice but to leave this world and colonize other planets. Stars are like planets, too, except they're on fire! So too was Wilt Chamberlain when he scored 100 points in a basketball game or the Human Torch when he helped defeat Doctor Doom. And really, buying land on a star is a lot like sharing the credit for Wilt Chamberlain's historic performance. Let's get down to brass tacks. I'm selling valuable sun soil at the low cost of $1,000 for 500 acres. That's cheaper than dirt! For an extra $500, I'll print out a certificate stating that your plot of land was blessed by both the Pope and the late Orson Welles. I'm also offering discounts on bulk orders. We here at Sun Plots have a saying, "the sun is hot property!" We really say that, and even though we're laughing at you when we say it, we really do mean it. ACT NOW! SUPPLIES ARE LIMITED!

Middle Aged Men Groping Each Other

Our very own Taylor "Psychic Cheese" Bell took a break from abusing drugs and alcohol to abuse himself in other ways, notably with "WCW Wrestling," a classic body slam from the past.