Trio the Punch - Never Forget Me 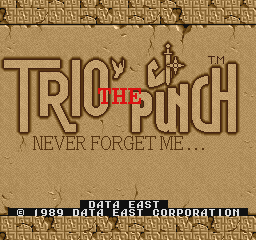 Trio the Punch - Never Forget Me conveys a gripping, emotional story regarding three combat weary desperados forced to roam the countryside, slapping hundreds upon thousands of fat naked men and zombies attempting to murder them before exploding. The back story of the game is a little bit hazy due to the fact that it's completely in Chinese and, well, there is no back story. I'll attempt to explain the plot of the game as best I can without understanding Chinese or arcade games created by six grade school students who created the entire thing while wearing salad spinning bowls on their heads:

It is the year 2006 or 2009 or 1874, and the world has fallen into a post-apocalyptic nightmare of epic proportions. Fat men with no shirts have taken over the globe, terrorizing innocent citizens by walking back and forth in straight lines while spitting out red sperm from their mouths. These bulbous nudists are supported by a rogue's gallery of evil characters such as "The Big Blue Severed Foot That Stomps On You" and "The Big Blue Severed Hand Which Releases Packets of Blue Ketchup On Your Head." In a quest to free the world from such a cruel and violent tyranny, you must walk from one side of the screen to the other for a few weeks, punching everything that moves and most of the things that don't. If you fail, the retarded zombies driving yellow cars and the folding albino sewer alligators will take over the world, transforming it into a terrifying landscape of highly confusing two-dimensional evil. Are you brave enough to press the "attack" button for about 40 hours straight and free the Earth from their iron grip of twisted, shirtless horror? Probably not. 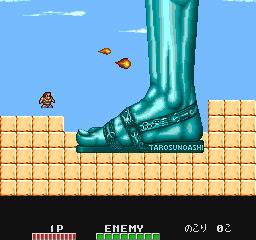 Many people might be turned off by the mere title of Trio the Punch - Never Forget Me, under the false impression that it's a game about a street savvy kickboxing monkey attempting to fight off WTC hijackers. I can safely announce there are neither any kickboxing monkeys or WTC hijackers in this game, although I really can't explain what is in it. You simply select one of three random characters, all of whom appear to be undergoing a painful enema via industrial vacuum pumps, and then prepare to fight roughly 100 million billion enemies like the following:

Since I didn't have an extra month to write this update, I wasn't able to sit down in one location and defeat this game, so I cannot reveal the exciting end boss behind this twisted invasion of Earth. Judging by the aforementioned enemies, I'm assuming it's something incredibly dangerous and deadly, like a sentient ballpoint pen or a giant tit which explodes. If you have beaten Trio the Punch and would like to send me a screenshot of the final boss, I'd love to hear from you. Hell, if you were able to play Trio the Punch for longer than 10 minutes without becoming an atheist and burning your house down, I'd love to hear from you. 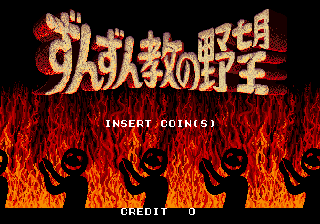 The nice folks in Japan didn't even bother translating the title of this game, which I suppose doesn't really matter all that much when you consider they would probably end up with something infinitely incomprehensible like Trio the Punch - Never Forget Me. I'd guess they would name it something along the lines of "Tender Stab: Legend of Extra Chicken." Zunzunkyou No Yabou is a Space Invaders-style shooting gallery game which you travel across the world and murder homosexual dancers from each country. Kabuki performers, Flamenco dancers, professional musicians, Indian women, Vegas showgirls, balding Japanese men leaving subway cars... everybody in every culture in every country must be murdered in order to cleanse the globe of, well, everything. It's kind of like a video game reenactment of the Christian Crusades, only with tiny Asian ghost buddhas instead of fat white guys in armor.

There are five levels in Zunzunkyou No Yabou, representing our five major cultures: American, Asian, Arabic, miscellaneous other ones that were too minor to require their own section, and outer space. The flow of the game seems to insinuate that once you finish committing genocide against every single living entity on Earth, you then proceed to murder creatures from outer space and complete your quest of removing every single living thing everywhere. As the last living creature in the galaxy, you will then elect yourself to the position of "King Galaxy" and pass a series of bills that proclaim how totally awesome you are while denouncing the numerous contributions Spanish dance has made to our culture. 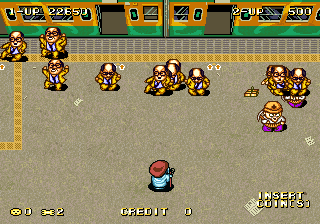 As previously mentioned, the play style is similar to any space shooting game, where your character always points up and you press one button to shoot bagels out of your hips, and the other to launch some sort of nuclear death attack which warps space and time in a cataclysmic fiery inferno of destruction and radioactive Buddhas, slightly injuring everything on the screen. After throwing out enough death bagels to decimate that country's citizens, you will then move on to the boss of that level, who usually has virtually nothing to do with anything.

After thoroughly decimating every sentient being on the planet, you then move on to the outer space-themed levels, where you murder aliens stupid enough to mistakenly have their own culture. A couple levels later you are required to kill the actual embodiment of planet Earth, which has somehow evolved into a bashful, dancing life form able to spit out tiny replicas of Earth at you and change colors after being shot a certain number of times. Upon defeating the Earth, you are rewarded for your hard work by watching the game reset and start over again at the first level. There isn't even a "congratulations" screen written out in the goofy alternate universe language the Japanese use; it simply resets and bang, you're back at level one, killing more disco dancers and homosexual ballet performers.

I hope that today's update has provided everybody with a wonderful set of alternatives to the Dance Dance Revolution craze sweeping through America. Actually, I'm not really sure how it would've accomplished that at all, since both games mentioned are about as addicting as chewing insulation, but hopefully I've proved to everybody out there that there are things even more brazenly homosexual than paying money to dance to happy hardcore while a group of fat slobs look on and shield their eyes from the flashing lights. Like Superhero America, for example.