We had made a lot of tweets and Facebook posts begging Smash Mouth to eat 24 eggs. Some of you even called and emailed Steve Harwell about eating a bunch of eggs for mystery reasons. Then, this man, this kind man, possibly feeling cyberbullied, finally capitulated to our challenge of eating two dozen eggs for our amusement-- on the condition that we rise to a challenge of his and raise $10,000 for a very worthy charity.

It was an impressive move on Smash Mouth's part, to say the least. The bar was also set at a super high mark that they probably figured nobody would ever hit. "Who wants to see the guy from Smash Mouth stuff his face full of eggs? No joker would pay $10,000 for it, that's for sure!" is what they probably said, while sipping their whatever-they-drink deep in the ivory towers of San Jose. Our task was clear, though. Plain English, it said that if we Internet people muster up $10,000 for St. Jude's, Smash Mouth will eat the eggs.

Around this time, a very nice man at the Montalvo Arts Center Place Area in Saratoga, CA asked if I wanted to go meet Steve and other mouths that make up Smash Mouth. I accepted this gracious invitation.

Actually, I was a little concerned. Parking costs $25 up there and when I told the parking attendant guy that I'm here to see Steve on business he said, "Go park in this lot over here," but never actually gave me a slip that said I paid for my parking. I also never actually paid for parking. After having already entered the venue, the thought occurred to me that I might arrive back little later to find my car had been towed. I began to wonder if this was part of it-- if Smash Mouth lured me deep into the mountains and stole my car. It would have been a cunning move, but my car was still there.

There was a lot of free wine on behalf of the gracious hosts at the Montalvo Arts Center and I got to meet the man who would eat the eggs. The man who had been begged to eat eggs incessantly for months, but who couldn't tell anyone to shut up about it because that incredible amount of tweets and Facebook posts and calls and emails were backed up with an even more incredible amount of actual, charitable donations.

We talked briefly. I thanked him for eating the eggs, which perhaps tipped him off to who I was. He got serious for a second and assured me he was going to eat the eggs. His voice was noticably less jovial at that time. I think he might not have been completely excited to meet me (or at least distracted), and it was over within a couple minutes. Some cougars came up and steered the conversation away, so I hiked back up to my seat, finished the paper cup full of Cab Sav I'd topped up, and tried to understand through a fog of incredible absurdity exactly what I was doing there. I seemed to be at a Smash Mouth concert, telling the dude I can't wait to watch him eat more eggs than humanly reasonable, and that we'd get him his money.

A few days later, we crossed the $10,000 threshold! Smash Mouth will indeed be eating the eggs! Thank you for eating the eggs, we can't wait to watch you fill your mouth with egg bits! We raised $10,000 for St. Jude's Children's Research Hospital for you, Smash Mouth. It's egg time. It's time to do the eggs! We can't wait for you to eat them up on camera for YouTube after we cook your eggs for you! 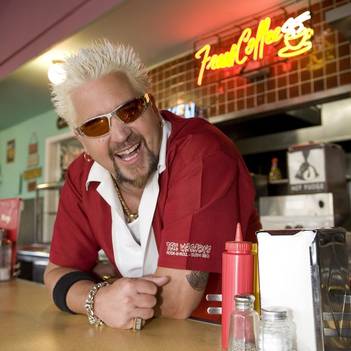 This joker? To cook the eggs? Nuh uh, nah. That wasn't part of the plan. He's Jar-Jar Binksing this whole shit right now. No. $15,000 additional dollars just to watch a walking, talking mid-life-crisis-in-a-flame-shirt crack some eggs? I think not, that's Divorced Dad territory and something that happens in studio apartments every weekend all across America. Nobody likes Guy Fieri, especially not on the Internet.

Several original Egg Challenge donors and well-wishers have agreed, and check it out: Guy Fieri needs to keep the words "egg challenge" out of his damn mouth unless he wants to eat 24 of his own, on camera, while you're doing yours, Smash Mouth. That's the only way. Either that, or Guy Fieri needs to stop horning in on things that don't concern him. That clown needs to skedaddle.

And what is this George Lopez business, Smash Mouth? Is someone putting you up to this? I mean, if you want to go on George Lopez and show him you can eat eggs, fine. That'll be a lovely exhibition and maybe a little good practice for the Actual Egg Challenge, which is not anything that happens on the George Lopez show. Let's do the real egg challenge, not something that can be edited down for TBS with the gross vomit parts, cursing and overall awkward unpleasantness removed. That's not within the spirit of the eggreement.

We made $10,000 for sick children on your behalf, Smash Mouth. We rose to the occasion. Don't be a Lillard on this.

I live in San Jose, Smash Mouth. I'm here. I'll bring friends. Let's go to St. James Park, I need to pick up my mailbox key at the post office anyway. We can eat the eggs there. Let's go lay out in the sun and eat some eggs together. We'll bring hundreds of eggs, enough for everyone who wants to come eat eggs with us.

It'll be an egg party, Smash Mouth. An #EggParty.