This autobiography is written the only way I know - by mashing my face against a red button and grunting. The button is set in a bank of circuitry that spans three puzzle-like rooms. Hopefully they form some sort of supercomputer capable of interpreting the morse code that I'm jamming out with my face. I suspect more practical methods might exist, but this seems appropriate.

You'll forgive me if these memories don't tell the full story of my life. A human head can only take so much writing before it begins to bleed all over the place.

My earliest recollections are vivid. I remember emerging from the womb and hearing the crunchy guitar riffs of a badass butt-rock tune. My mother named me Doom Guy, a decision which would prove to be prescient years later when I went on to play a central part in the events of Doom.

Shortly after birth someone carried me through the blood-spattered industrial corridors of the hospital, past dozens of identical doctors who took several steps in one direction before turning around and repeating the process.

I was placed atop a raised platform, safely surrounded by a moat of lava. After fussing, I drifted off to sleep, the comforting sounds of the same wordless rock song continuing its endless loop.

In all likelihood, my experiences growing up were much the same as yours. The future seemed to stretch infinitely before me, full of possibilities. My imagination brought magic to the mundane. I was fascinated by old trinkets whose previous owners were long since dead, not yet realizing that they would outlast my fleeting life as well. The hallways in my home were littered with floating armor bonuses.

I was never one for sports. Most of them involved catching balls, a nearly impossible task if you're unable to look up or down. I did, however, always enjoy the simple act of running. My friends were always envious of my ability to seemingly glide, moving backwards and sideways just as quickly as I ran forward.

There was a girl in high school that captured my heart in a way that no other woman would. She was pretty, yes, but in an odd way. Her features were almost boyish, her hair always in a messy bobcut, but her eyes were dark and deep and her full lips pulled back in a knowing smirk. What truly set her apart, however, was the day that she discovered the hidden passage in our math classroom and got the super shotgun.

Sensing the fact that she intimidated me, she frequently sought me out and playfully coaxed me into conversation. I never told her how I felt, and that is my greatest regret.

Most people are surprised when they learn that my intellectual interests extend beyond simply being a space marine. 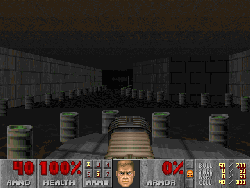 I spent four years in college, majoring in Exploding Barrels with an eye toward becoming a Theoretical Exploding Barrel Physicist. There was a two year period where my face was constantly buried in one exploding barrel book or another. I read all the notable volumes, from Carmack's Barrels As Metaphor to Romero's Can We At Least Find A Use For These Barrels.

My minor was in Hell Portals, and while I was not naive enough to think it would land me a job in the real world, it was nonetheless a fulfilling and eye-opening subject. As something of a liberal idealist I tended to argue against the opening of hell portals - much to the amusement of some of my classmates and professors.

Unfortunately, I failed my last semester. I had foolishly stored my exploding barrel experiment on a wobbly shelf right next to my hell portal research, each project the final for its respective course. Predictably, disaster struck when I turned the hell portal project in to my exploding barrel professor and vice versa. Devastated, I elected not to return to college, and instead joined the space marines.

Although several decades have passed since the Doom incident the horrors are still fresh in my mind. Revisiting that period of my life is more difficult than I can express. I'd probably classify it as Nightmare difficulty.

I'm sure that you will want my perspective on the event, but it would probably be best for all involved if you simply played the video game based on my experience in the Doom incident, Quake 2.

Returning to Earth was strange to say the least. I didn't know what to expect as I certainly would have shied away from the artifice of a hero's welcome, but my reception was largely indifferent. So much of the Doom incident had taken place away from society's eyes that it had become almost intangible. People understood that a terrible fate had been avoided much as they understood that someone came by to take away the trash every few days. 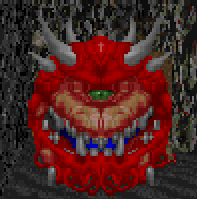 I had a difficult time adjusting. For a few months I simply roamed the streets, hoarding health potions and lashing out against walls with chainsaws. By the time I cleaned up my act and decided to reach out to my childhood love I discovered that she had passed away only weeks earlier. I sat in her kitchen drinking tea, listening to her husband tell me the tale of her death as her three daughters quietly played in the living room.

She had stepped out of bed in the middle of the night to get a glass of water. Not wanting to wake anyone up, she had decided not to insert her yellow keycard into the light switch panel. In the pitch black she bumped her ankle into the coffee table, then fell back into an explosive barrel. At least her death had been instantaneous, her husband told me, not believing his own attempt to fabricate some small upside to this woman's death.

I went back to school. What a sight this old grunt must have been. Upon graduating, I became a lobbyist for the Anti-Exploding Barrel movement. My scientific approach to the problem has helped the cause in its slow but sure progress over the last twenty years.

Who knows what the future holds, or how long I'll be part of it. All I can say is that I'm thankful for what meager slice of time I have received in this dreary life and for that time I shot a Cacodemon with the BFG9000.