What I remember about March 19th, 2007? I woke up like it was going to be a normal day. The newsroom was pretty quiet that morning. Mondays are usually slow as the weekend and Spring months bring little news for nerds to rage about. We were doing a report on Stalker and how it over-promised and under-delivered, sending PC game nerds into their usual uppity, "I knew it was going to suck!" spiels.

I got a call around 5 'til 11 just as we were about to go off the air for the morning. It was our field reporter saying that the unthinkable was happening. He was pretty shaken up and so was I. Once we got confirmation we broke into the Stalker story and then all hell broke loose.

I will never forget that day. Never.

Join us as Nerd Rage News takes a look back on the events of March 19th, 2007. Here, fully uncensored and in its entirety, is the Nerd Rage News broadcast from that fateful day. Warning, some of the images you are about to see may not be suitable for younger veiwers. 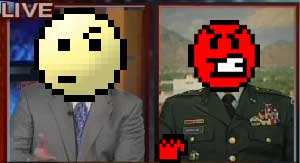 ANCHOR: So basically what you're saying is that you want reparations?

CRAZY VIDEO GAME NERD: That's correct. We are sick and tired of developers promising the world to us loyal gamers and then delivering the same crappy games over and over. It happened with Fable. It happened with Stalker. It's going to happen with Spore. We're sick of being treated like this and it's going to stop right now.

ANCHOR: But what justification do you have to ask for money from these developers? Often times during the development process certain features must be cut for time or financial reasons. Do you hones-

CRAZY VIDEO GAME NERD: They must pay, no, they will pay, for the trauma and mental anguish they have caused us. We follow these titles from their inception to their release, foregoing sleep and sexual intercourse in the process. This isn't some kind of game to us. It's real life. We're going to send a messa-

ANCHOR: I apologize but we must interrupt this interview for some breaking news. We are getting word that there is a disturbance at Capcom headquarters in California where a fire has broken out. Rick Little is reporting from our nerd eye in the sky, Nerd Copter 6. Rick? What can you tell from your vantage point?

NERDCOPTER RICK: All hell has broken loose here at Capcom headquarters in California. It seems that an angry mob chanting something, I can't quite make it out from here, has set fire to the building. The mob is growing by the minute and local police is powerless to stop it. 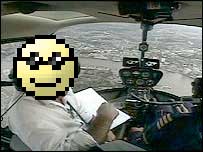 ANCHOR: Is there any word on why this mob has formed and set fire to the Capcom building?

NERDCOPTER RICK: We don't know at this moment in time. It's hard to imagine what the folks at Capcom could have done to set off such a reaction. One thing is for sure, this mob won't go away quietly.

ANCHOR: Thanks Rick, these certainly are unsettling images. We now go to our reporter on the ground Rob Suzuki. Rob?