ROB SUZUKI: This is Rob Suzuki reporting live from the ground at Capcom Headquarters. At approximately 10:30 this morning a group of rioters chanting, "Death to Capcom. 360 sucks. Sony rules" congregated at this location and torched the Capcom USA building. They are now demanding the scalp of Capcom developer Hideki Kamiya for a ritualistic sacrifice. All this because Capcom announced earlier today that the upcoming sequel in the Devil May Cry series, which Kamiya created but is no longer apart of, is coming to the Xbox 360. 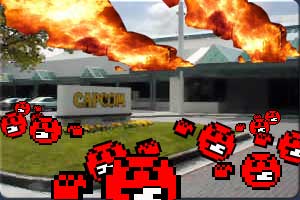 ANCHOR: So Devil May Cry 4 is no longer a PlayStation 3 exclusive for Sony?

ROB SUZUKI: That's right, and these nerds, all of whom are either too fat or too skinny, are mad as hell about it.

ANCHOR: Will the game still be released for the PS3?

ROB SUZUKI: Yes, it will be released for both platforms, that's what's so insane about this. No matter what system you own you will be able to play the game when it is released. That simply isn't enough for these rioters however. Let me see if I can get in close and interview one of them. Sir? Can you put down the torch and answer a few questions for me? Why are you rioting today?

ROB SUZUKI: How does this affect the quality of the game in any way?

ROB SUZUKI: But you will still be able to play the game. But now that it's on multiple systems, Capcom can expand its user base that much more. Why is this such a bad thing?

ROB SUZUKI: Thank you for talking with us. The mob is now passing around a petition urging a boycott of Capcom games. I'm being told that I need to get out of here as the police are sending in officers in riot gear to quell this civil unrest about a video game once and for all. This is Rob Suzuki reporting live from Capcom headquarters in California.

ANCHOR: Thanks Rob. We have more breaking developments to report. Sega is announcing that the long standing PlayStation series Armored Core is heading to the Xbox 360 as well as the PS3. We now go live to Sega of America headquarters to see how Sega fans are handling this loss of exclusivity.