BOB SUZUKI: This is Bob Suzuki reporting live from Sega of America headquarters where Sega has announced that Armored Core 4 is heading to the Xbox 360. Now, there is nobody here at the moment and we are not sure if anybody is going to come by and express their disgust. Sega of America seems to be empty as well. We have not seen a single person enter or exit the building since we arrived some six hours ago. We aren't even sure that anybody has worked in this building in well over 2 years.

Oh, here comes somebody. Sir? Sir? How do you feel about Sony losing Armored Core 4 to the 360? Will you not be buying a PlayStation 3? Is Sonic the Hedgehog too gay now? Sir? Oh, he's just a local jogger. Well, this is Bob Suzuki reporting live from Sega of America, and we'll let you know if anything ever happens here again.

ANCHOR: Thank you for that report, Bob. New information about Sony's continuing loss of exclusive titles is flooding into the newsroom at a fevered pace. Sony has now lost Ace Combat 4, Grand Theft Auto IV, and Folding@home, all of which are due to appear on the Xbox 360 before the end of the year. It's going to be a very tough day for Sony who- Wait a second. I'm now getting word that Sony is losing 1st party titles as well. Ratchet and Clank, Gran Turismo 5, and PlayStation Home are now slated for release on Xbox 360 before the PS3.

This is just amazing. President of Sony's PlayStation division, Ken Kutaragi, has announced to shareholders that both the triangle and square button have jumped ship, citing irreconcilable differences with the company. Where these mainstays of the PlayStation controller will end up is anyone's guess, but it has become plain as day that they cannot stay successful on Sony's failing console. Circle and X could not be reached for comment. No word yet on which buttons will replace triangle and square, but Kutaragi has stated that in order to afford them consumers should work more hours if they really, really want those buttons.

Sony is now holding a press conference where Phil Harrison, president of Sony Computer Entertainment Europe is fielding questions from the press. Let's go to it live. 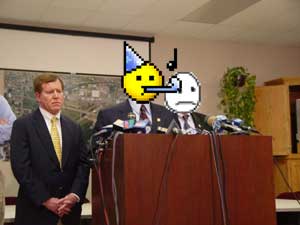 PHIL HARRISON: Today's announcements are just another indication that the PlayStation brand is as strong as ever. We've received some new numbers today and we are pleased to announce that 67% of all people who have watched Talladega Nights on a Blu-Ray disc, watched it on PlayStation 3. In fact our number 1 selling game is Talladega Nights. I will now take questions from the press.

SOME OTHER REPORTER: Are today's losses an indication that Sony is losing dominance in the home console market?

PHIL HARRISON: Not at all. As I've said the PlayStation brand is as strong as ever. The system is so popular that we are having trouble keeping up with demand. Once we are able to replenish supply those developers will return to our platform. In fact demand is so great that I will suck off anyone who is able to purchase a brand new PlayStation 3 right now. No, really. I will suck your dick if you bring me a PS3 that was purchased in the last hour. Come on. Nobody? I'm sure there's a PS3 you can find somewhere. Free blowjob? Nobody? Okay then, you see how hard it is to get a PlayStation 3. We simply can't keep up with the high demand for our system.

REPORTER: Do you think we're stupid?

PHIL HARRISON: Yes. This press conference is over!

ANCHOR: It is a dark day for Sony, and the world. With the PS3's exclusives jumping ship, one only has to wonder how we as a nation can carry on. As always Nerd Rage News will continue its coverage of the day's events, and inform you on any new developments. We'll stay with you in these tragic times. To recap, Sony has lost the followi-

When someone asks you, where were you when Sony lost all of its exclusives, you'll remember. Oh, you'll remember. After that day we wondered how any of us could go on. But we did the only thing we knew how to do. We stayed on the air and reported the news. In some small way, just being there helped ease people's fears. Throughout the day there were rumors of more lost exclusives, but they were just that, rumors. It was so crazy. We just didn't know what to believe anymore. We just didn't know. We will always remember the pain of that day.

The reason Sony lost these exclusives, the reason these people wanted to release games on multiple platforms, these developers... They weren't doing anything wrong, they were living their lives, they were going to work, they were making games, they were doing what they normally do.

Uh, as I understand it, and my understanding of this is vague, at best, another smaller group of people announced they were going to boycott Sony and post angry messages on Internet forums. And we're told that they were zealots fueled by nerd rage, nerd rage. And if you live to be a thousand years old, will that make any sense to you? Will that make any goddamned sense? 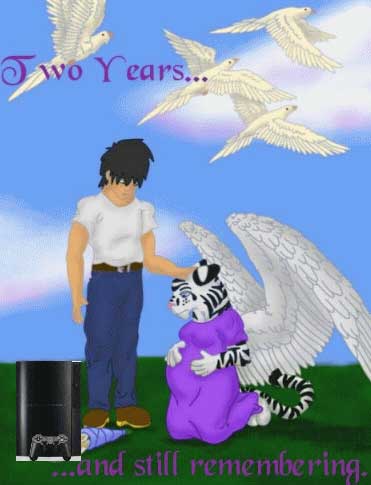