In the Crosshairs of a Great White Shark 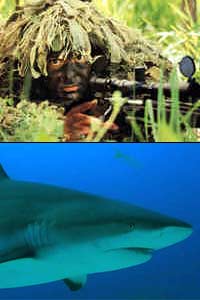 Just when you thought it was safe to get back in the crosshairs...Right now America rests nervously in the crosshairs of danger. A sniper is on the loose and he aims to shoot everybody, completely at random no less! People are walking in zigzag formations, constantly making sure they're behind proper cover, and avoiding public places because they fear that a sniper might shoot them. Everybody in the sniper's hunting ground is living paranoid and fearful that their bodies may become host to deadly metallic pathogens that doctors call "bullets." What's troubling is not so much the fact that somebody with a sniper rifle is out killing people, because life is all about throwing you lemon curveballs, but that we are neglecting an even greater threat to our safety and well being. Last year, it wasn't snipers we worried about. It wasn't even terrorists! Not by a long shot, for we were too busy worrying about surprise shark attacks. The death toll was high and the media never shut up. Sharks were unstoppable and they could strike anywhere without any warning. Children were kept away from schools, churches and stores were abandoned, and everywhere Americans were securing their homes with shark nets. The Great White Threat was something everyone had to confront, even really great white people. For them, it was perhaps the most difficult.

As far as I know, millions of sharks are still on the loose. Any one of these sharks could turn into a killer, if not a genocidal warlord or even a terrorist. Why then are we worrying about a sniper and leaving ourselves vulnerable to surprise shark attacks? I think it's safe to say our priorities are seriously screwed up in this most paramount of matters. Now I'm not saying that the crosshairs of a sniper are a safe place to be, not unless you're made of Kevlar or you're in the process of committing suicide, so don't think that sharks are the only fish in the proverbial sea that is danger. Obviously both sharks and snipers are the primary threats facing mankind and there really is no way to protect against a surprise attack, but there is most certainly a way of determining who and what the surprise attacker is and how you should react. That's why I'm preparing for you this handy chart to help you understand the complex ecosystem of trouble we live in, filled with fierce snipers and hungry sharks ready to devour man flesh.

The absolute most important thing for everybody to remember is that nowhere is safe. The only aid a shark needs is a body of water, and because of a dependence on water, you're never far from one. The only thing a sniper needs is a gun and some bullets. What's worse, these two forces of evil share a common enemy: you. Never let your guard down, not on land, nor sea, nor air. It's only a matter of time before sharks evolve wings and snipers start riding on them. When that happens, you can bet your weight in Dutch cholocate that the end is near.

Workin' in the Goldmine

Well it's that time again folks, and over at the Something Awful Forums the goons have been busy preparing for you a plethora of craziness and sand, not necessarily in that order. This week's theme is "Bad Times for Verizon to Test its Wireless Network." WARNING! It contains some pictures of that annoying gay man with the trendy glasses. 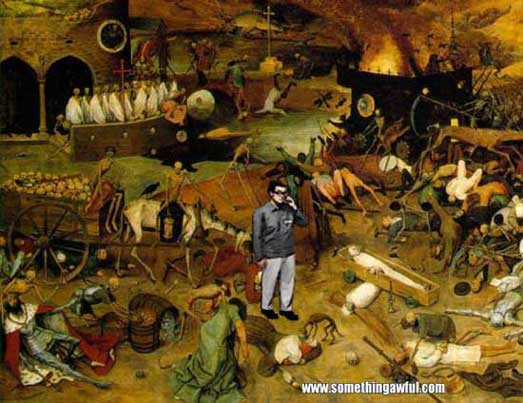 Go look at them, they are purdy like the ponies were after Daddy got mad.