How to Spot Me in a Crowd

Sorry about the blurry photo. I was lunging at my phone, yelling at it to take a clear picture. It's the only image of me that exists. I'd take another picture for you, but I'm in the middle of a rigorous trampoline session.

Meeting someone from the internet for the first time is already a little awkward, and now you won't even know what I look like. Oh! Why don't I make it easier for you to spot me at the park tomorrow?

I'll be the one wearing a garbage can around my torso. It's the classic model, a tin beauty with long vertical ridges and various dents that give it character. As always, the garbage can will be supported by a pair of fine silk suspenders. 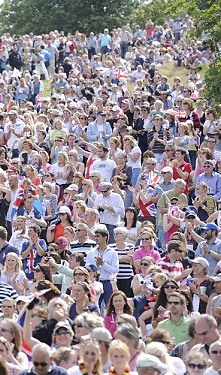 I'll be the one with a complexion best described as inverted strawberry. My skin is jaundiced, my freckles a rich waxy red and arranged in an alarmingly precise diamond grid.

I'll be the one staring at my cell phone as it hovers a scant few feet over my head, always just out of reach. I will jump but it will lazily float higher. I will turn away and pretend to forget about it, whistling, then try to surprise my phone by doing a jump spin with both arms reaching up super high. The phone will swoop down inside my overextended guard and smack into my nose then float back up as I collapse to the ground.

I'll be the one arguing with a child about #GamerGate. Specifically, I will tell a 4-8 year old kid about #GamerGate and get really mad when they react negatively to the concept of doxxing, threatening women, or my repeated attempts to explain the corruption inherent in video game coverage that isn't specifically suited to my vague, often contradictory demands.

I'll be the one wearing oversized ankle-length jorts, signed and battle-blessed with a kiss by Kevin Smith. Please, no criticism. I will only allow praise.

I'll be the one with the facial hair. You'll know it when you see it. It grows this way naturally for me, but when people want to emulate my unique style of beard they ask their barber for the Enchanted Oases.

I'll be the one with a terrible face wound. It will still be bleeding. I haven't decided where it will be. Probably the forehead.

I'll be the one twirling a staff in very elaborate and impressive ways, but super casually. It will be like I don't even realize how amazing I'm being. That's right, the staff is a 1:1 replica of Gandalf's staff. If anyone asks, I will explain how my version of the staff is actually more authentic than the film prop. You see, that one was a combination of shaved foam and balsa wood specifically made to weigh practically nothing for extended film shoots, while mine is carved from ancient elven Mallorn a.k.a. pine.

I'll be the one straight up drinking milk out of a gallon jug. Not even cold milk. We're talking about some room temperature milk here, folks. Don't worry, I'll bring enough for you to run five or ten minutes late. Take any longer and you run the risk of me wandering off to buy some more milk.

I'll be the one wearing a red baseball cap.