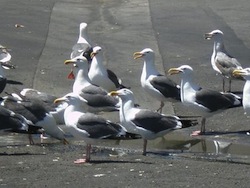 HELLO!!!!!!!!!!! perhaps my number one problem these days is a lack of shut eye and by that i mean good old fashioned sleep! A man like me toils away well into the night on a variety of projects and ideas about the future and catching great big fish. the doctor gave me a bunch of sleep pills but those things are for the birds because i spilled them in the pharmacy parking lot and seagulls took them so i used the old-fashioned approach: warm milk before laying down for the night in my Pig Shed. (Yes I Still Live In The Pig Shed)

I began by drinking a big glass of hot milk before i washed my face and put on my pajamas but this didn't work very well and became very unpleasant for me in the stomach department because it would gurgle and make bad sounds all light like a halloween cauldron with a wild man skeleton in it. After an hour or two of being woken up by my own stomach making bad screams it got easier.

Then it got worse again because the piglets that sleep with me wanted milk too. They love the stuff but pig momma Victoria is all tuckered out by the end of the night and goes off to sleep behind the water heater so it was just me and the pigs drinking glass after glass of warm milk in the shed in the middle of the night. It didn't take too long before me and the pigs start smelling bad and doing lots of horrible sour burps. eventually we fell asleep the whole night through but it was a real challenge to get there without wanting to spit up into the inside of my own hat that i wore to bed

I got real comfy that night (And The Pigs Did Too) and everything went fine at the start but now that it's warming up again outside the ants are waking from their slumber and going off in search of food, which means they come into places like the Pig Shed. it wasn't much trouble to begin with. the first Ant Sighting there were a few of them in my half of a cantaloupe and my dried up Yucky Milk drool pool so i went back to sleep, but right after that was when i was woken up by the tickle of hundreds of ants running a trail up my leg, on my nice chest, and toward the hot dripping milk drool, as well as 7 baby pigs sniffing and eating the ants off my body. there was also a moth but one of the pigs ate it also. i laid still and screaming until they ate all the ants which took a long time because they kept coming in underneath the door.

That happened on the morning of the mayor's party for his staff down at the lake which i ran to after getting dressed. i ate a bunch of potato salad and headed down to the dock to get on one of the speedboats for a speed boat ride (There Were 2 Boats And You Could Ride In The Red One Or White) the red boat is the faster boat so i got in there and buckled myself in and was a passenger on the high speed lake ride while i waited for my terrible milk and potato salad burps to go away. the boat hit something with a huge thump and the driver pulled the boat back up to the dock and checked out the damage and it looked like he hit a bird with the speedboat somehow which was confusing enough but then one of the fishing kids reeled in another bird from the lake. while this was all unfolding the mayor saw my dried up milk face and dead ants embedded in the drips and told me to go home, and just in time too because one of the teens was a boy scout and had cut one of the birds open and found lots of sleeping pills in its stomach so it's probably good that i got to go home when i did and I got a speedboat ride. BYE!!!!!!!!!!!!!!!!!!!