If you've seen The Amazing Spider-Man then you undoubtedly noticed Stan Lee hamming it up in yet another cameo. You might have stopped to think about this, and came to realize that his schtick was wearing a little thin. Well fuck you buddy.

The guy created some of the most memorable comic book characters of all time. He can appear in as many ill-considered movie scenes as he wants. Besides, his cameos aren't always dumb. Sometimes they're surprisingly great.

The Lord Of The Rings: Return Of The King

Mount Doom. Gollum plunges into the roiling river of lava, clutching the One Ring. As the flesh of the tortured creature dissolves, the camera cuts to Stan Lee. 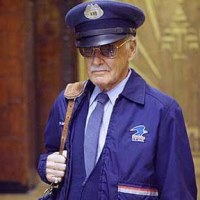 He is poised atop a springboard in a classic diver's position. Knees slightly bent. Hands pressed together before his chest, as if in prayer. His expression shifts from anticipation to shock as he sees what's happening to Gollum.

Stan Lee removes his skin-tight swimmer's cap, holds it before his eyes, then tosses it over his shoulder before climbing back down the ladder.

As Batman emerges from the tank of bats, a janitor does a double-take. It's Stan Lee. He holds his mop before his eyes, then tosses it over his shoulder before walking out of the nuclear complex.

When Joseph Gordon Levitt's character discovers that he has cancer, he makes his way through the doctor's office in disbelief. In the background, Stan Lee stumbles across the hallway on fire, his arms windmilling.

Eagle-eyed viewers will note that Stan Lee appears in the background during each of Levitt's trips to the hospital for chemotherapy. Each time he is on fire, with no one helping or even turning to regard him.

Stan Lee whips open the door to a dusty shack. A young Ray looks up from his miniature piano in surprise, instinctively flinching away from his father. Stan Lee stomps into the home with a very angry face.

"RAY YOUR BROTHER GOT SUCKED INTO THE HARVEST MANGLER AGAIN. I BLAME YOU! YOU AREN'T ALLOWED TO ENJOY ICE CREAM GIVE ME THAT."

(There's ice cream. Also, Stan Lee isn't exactly screaming or forgetting that he left caps lock on. That's just my way of conveying his direct method of acting, which involves saying everything as though he is standing at the fridge and asking people in another room if they want anything. He continues...)

"I HOPE YOU GO BLIND. I HATE AND RESENT YOU. I AM REMARKABLY BELLIGERENT AND UNREASONABLE."

As Stan Lee furiously sits down, a thought bubble appears above his head. In it, there are comic book characters frolicking about. The camera cuts to an angle closer to Stan Lee's head, an intimate shot. He turns and winks.

Iron Man is flying as upbeat generic butt rock plays. Suddenly there's a beeping! Iron Man looks at his computer readout. He mutters in disbelief. There must be a malfunction. It says there is another Iron Man nearby.

Stan Lee zips by in a way cooler Iron Man suit. He hits his air brakes, then turns around in an impressive corkscrew maneuver, his boot jets leaving a streak of glowing blue light behind him. He stops in front of Iron Man, lowering his visor. 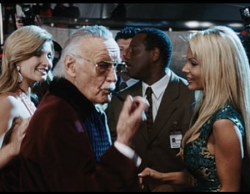 Iron Man shakes his head in disbelief. It makes a funny wabba-wabba sound.

"EXCELSIOR!" Stan Lee waggles his eyebrows at the camera then flies off at mach 3.

Stan Lee is laying down next to Ryan Reynolds' character for the duration of the film. There he is, right next to him in the coffin, eating a bodacious six-foot sub sandwich.

Thankfully, Stan Lee doesn't speak at all. That would undercut all of the film's tension. Instead he lays there, munching away, nodding in appreciation of Ryan Reynolds' acting.

Of course, there are a few close-ups from directly above Reynolds' face. These are the shots that do not involve Stan Lee. Aside from one instance, where his hand enters the frame, wiping crumbs off on Ryan Reynolds' stubble.