Hitler Had Some Good Ideas

It is a controversial thing to say, the sort of opinion that will get me into a lot of trouble with the "PC crowd," but I feel compelled to say it: Hitler had some pretty good ideas. It's one of those true things that when you say it in public sends the usual thought police into a tizzy. Of course the Holocaust was bad. Of course WWII was a terrible violence dealt to history. Does that mean the guy responsible can't be a great thinker?

Now, a lot of those truth-speakers who admit to Hitler having good ideas tend to speak in generalities about fixing the German economy or something. I'm not interested in meaningless platitudes. I wanted Hitler's ideas in Hitler's own words. His diaries, kept from 1936 through 1945, offer revealing insights about the man as a thinker, a philosopher. 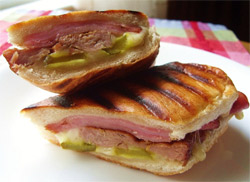 Placed a cheese sandwich between two hot skillets and pressed them together. The butter and bread hardened a little bit and made a nice crispy outer layer. This would be excellent with roast pork, ham, Swiss cheese and pickles. A good hot-weather meal. Cubans should try this sandwich.

I have terrible blackheads on my nose. I wish there was an adhesive tape in a strip that I could place onto my nose and pull out all the blackheads. Then I could see them afterwards on the strip. Also a strip, placed in the exact same location, that would allow me to breathe correctly during sleep and athletic activity. 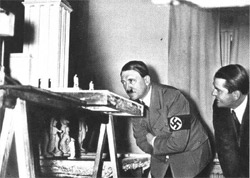 I continuously slam the doorknob into the wall when I open the door with excessive haste. I like to make a big entrance so I am prone to throw doors open or even kick them open, but now every wall in my house has doorknob indentations in the plaster. I think I will speak to Fritz Todt about constructing a small peg with a rubber cap and placing this just inside the door on the wall. It will be of a sufficient length to stop the doorknob from hitting the wall. Perhaps a flexible spring construction so that it does not damage the door?

Panzers roll across the Ardennes, driving to Paris, and yet I cannot get my mind off of the conversation I had with Hermann Goering. We are both very much into films of America, but we waste much time debating before choosing which film to watch. I remarked that it would save us time when selecting the film if we somehow compiled all of the reviews of newspapers throughout the world creating an aggregate score and then compared this to a second score done by surveying patrons who have watched the film.

While making a cat's cradle from a rubber band today I decided to cut the rubber band. I had the thought that a very large and precisely-measured rubber band could be tied about the ankles of a man or woman and they could then leap safely from a high place, bouncing repeatedly on the band as they are thrilled by the action. 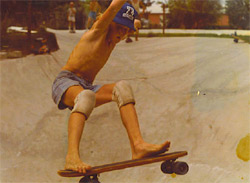 A skateboard should have a kicktail on both ends and this way you could double the tight tweaks. Also a games like the Olympics but for overgrown children jumping on ramps while terrible rock and roll music plays. Seek sponsorship from Fanta. Also skateboards should have sick graphics.

When people have too many things in their house they will sometimes rent out storage in a warehouse. But what happens to their things when those people die or disappear or fail to pay? We are looking for a program for this new thing called television. Why not follow the men who buy these things? It must be a confrontation as real as the horror currently transpiring in Stalingrad.

I have devised a method for compelling women to do my bidding. I insult them, touch their arms and wear enormous hats. Also I am Hitler so they pretty much have to do what I say, but it should work with non-Hitlers. Remember, guys, I am down a ball on the play, so I've got to wear the officer hats to make up for it.

A two-wheeled, motorized vehicle you can stand on and lean forward and back safely. It will contain complex balance control mechanisms. Possibly we could put a bomb on this or overweight white Americans in urban areas.

Use a beam of light to read tiny encoded information from a reflective disc. The discs could contain entire films and music compositions. Do not make these discs large or they will only have a niche audience of collectors.

Note for OKH: Add to the mess kit of all soldiers immediately a continuous bubble gum strip arranged in a roll or reel. Two meters length. For you, not them. 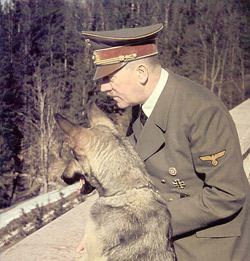 It is cold at the Berghof. A scouring wind is blowing across the Alps from East and from the West. My generals try to tell me things will improve, I tell them the same, but at night all I can hear is the howling wind. I have asked Albert Speer to make a recording of the ocean on a tape that will play continuously in my bedroom. He has also suggested the sound of rain, whale songs and the burble of a stream. Perhaps these sounds will keep me warm. Also I have created a garment for Blondi to wear on our morning walks. I knitted it myself. It says "TOP DOGG." I do not know why I used two Gs or why I used the English words.

Day and night bombs are falling upon the streets of Berlin. The Bolsheviks will be here soon and yet all I can think about is placing chewy mint candy into jugs of cola and recording the fizzy reaction. You could arrange many bottles and drop the candies into all of them at once. I think, at last, this would make the Jews of the world take notice.

Even as I contemplate my death, I hope my legacy will be something more than this war. I have ordered the cancellation of the small tank program. The men were disappointed, until I told them that all of the money saved should fund another season of Arrested Development.

Once again, for all of you who are looking for a reason to be pissed off: I get it. Hitler was a really bad guy. I think I've made the case that even a guy as bad as him can have some pretty amazing ideas.