The Social Network; Buried; Let Me In

It's October, in case you hadn't noticed, which means the Summer months are officially behind us and we can start looking forward to some genuine Oscar-bait material and maybe even some entertaining horror movies. This week sees an attempt to mix both, with The Social Network, Buried and Let Me In all lining themselves up for audience consumption. The Crazy Eights spread out in a military fashion to find out if they're actually any good.

Timeliness is Next to Godliness

EXPECTATIONS: A few years ago, writer Aaron Sorkin opened a group on Facebook in order to ask college students for their thoughts and opinions on the Web site and its myriad useless and terrible functions. At the time, I refused to contribute because A) I'm boring and have no Facebook friends, and B) I didn't want to encourage Sorkin in what I was sure was a quixotic quest to make a movie out of "a goddamn MySpace ripoff." Fast forward to 2010 and The Social Network, written by Aaron Sorkin, is somehow getting early Oscar buzz and rave reviews from pretty much every critic on the planet. Serves me right, I guess.

REALITY: Initially, The Social Network might seem like a hard sell. In a nutshell, the film is about the technical and legal processes resulting in the creation of one of the most popular websites in the history of this horrible experiment known as The Internet. If you didn't roll your eyes at the prospect of a movie about poking, friending or liking people, then you probably yawned at the idea of a big-screen version of Pirates of Silicon Valley. However, with names like Aaron Sorkin, director David Fincher and composer Trent Reznor attached, film connoisseurs immediately puffed on their cigars, adjusted their smoking jackets and said "Hmm, yes, this sounds quite interesting." And it is. In fact, it's one of the best movies of a year in which the other "best" movies have all been cartoons in one form or another.

The movie opens in the fall of 2003, as Harvard sophomore Mark Zuckerberg (Jesse Eisenberg) ends a disastrous date with a girl from Boston University. That night he gets drunk, slams the girl on LiveJournal and creates a Web site designed to rate the hotness of every girl at Harvard using each house's internal photo database. This stunt gets Mark noticed by the unfortunately named Winkervoss twins (both played by the awesomely named Armie Hammer), who hire him to design an exclusive social network for Harvard students. Instead, Mark tweaks their idea over the course of a month and soon thereafter launches his own site called ... you guessed it. ... Facebook. 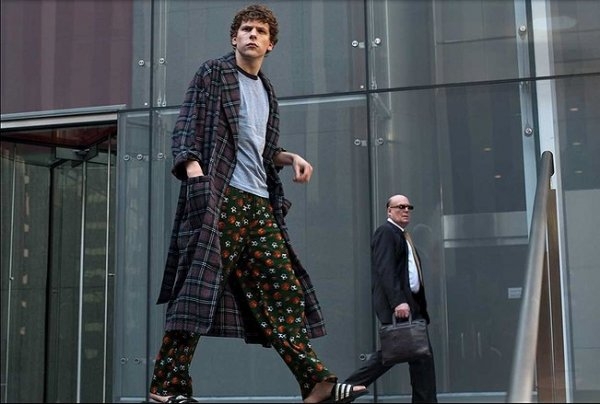 When you're the inventor of Facebook, you never have to change out of your pyjamas.

If the film had just been a thirty-minute re-enactment of Mark shirking all of his collegiate and social responsibilities to type up thousands of lines of code in order to create Facebook, The Social Network would be one of the most fascinating short films ever made. But the story doesn't end there. Next we meet Napster mastermind Sean Parker (Justin Timberlake), who sees Mark and Facebook as his next ticket to the top. Parker talks a big game to Mark, who agrees to move the operation to California in order to win more investors. This effectively cuts out Mark's friend Eduardo (Andrew Garfield), who up to this point has been Facebook's sole financier.

All of this social and financial backstabbing is told in flashback during legal hearings, during which Mark is being sued for intellectual property theft. I'm not going to begrudge Sorkin's need to turn this film into yet another procedural drama, because this is really the only way to tell such a story effectively. Otherwise, we'd watch Mark create Facebook, make millions of dollars, screw a bunch of people over and then sit in boredom for thirty minutes as lawyers recite everything that just happened off a deposition. 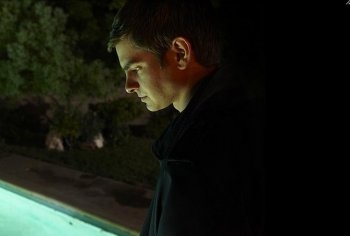 Just wanted to point out another talented British actor taking Hollywood by storm.It's hard to say who deserves the lion's share of the credit in this film, given that the whole production is pretty stellar. Sorkin's dialogue is lightning fast and never gets bogged down in bullshit technical jargon. Mark tacks away at his keyboard, says the word 'algorithm' a couple hundred times and viola, a Web site is born. David Fincher, a director with no discernible style other than "make everything muted and dark," really makes that style work in this film. Every scene feels as though it's being filtered through Mark's own detached perspective. Even a brief scene between two people becomes its own little case study in human behavior with the way Fincher shoots his actors. In addition, the musical score by Nine Inch Nails' frontman Trent Reznor pulsates and stomps all throughout the film, just in case you missed the part where the movie is about computer nerds. While it isn't exactly memorable or catchy, the music gets in your head and won't leave until you've told all your Facebook friends about it.

And then, on top of all of these masters at the top of their games, we have the actors. Jesse Eisenberg played such a good Woody Allen in last year's Zombieland that I was really expecting more of the same here. Instead, he finds the character at the intersection of Rain Man and Jeff Goldblum's character from Independence Day. When questioned at a legal hearing, Mark has little of relevance to add to the proceedings, but when he gets down to the business of Facebook, he's completely unstoppable. Eisenberg completely sells Mark as a protagonist, but the more time we spend with him, the more we see that Mark may not be as mentally present as we think he is. 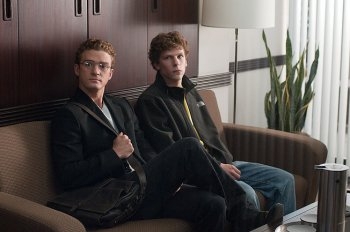 Timberlake disappears into the role by wearing spectacles and combing his hair back. ACTING!Also great, if you can believe it, is Justin Timberlake. Despite his introduction, where he practically turns to the camera and says, "Yeah, I just slept with a girl, what up," Timberlake damn near steals the entire movie as Sean Parker. In some scenes he comes across like a young Lex Luthor, scheming and planting delusions of grandeur into Mark's head. Other scenes leave you wondering whether or not Sean Parker is, in fact, the devil. It's roles like this that make us wish Timberlake would give up his embarrassing day job and take up acting instead. He clearly has the chops for it, but at the end of the day I guess pretending to be talented is more fun than actually being talented.

If you'd told me ten years ago that the founders of both Facebook and Napster would one day become compelling characters in a biopic from David Fincher, I'd have probably said, "What the hell is a face book?" and then punched you for asking a stupid trick question. If you'd told me the same thing five years ago, I might have just laughed in your face the way my friends did when I asked them to come see the movie with me on Friday. Today, it seems like a no-brainer to immortalize the world's youngest sociopath/billionaire on film. And what a damn good film The Social Network turned out to be. Seriously, if your friends are still cracking jokes about "That Facebook Movie", unfriend them, erase them from your address book, tear their card out of your Rolodex and burn that bridge forever. Take it from me, you didn't really want to know that person anyway.

MINORITY REPORT: Hurp-Durp, it's the Facebook Movie! Can't wait for the scene where they all play Farmville hurpadurp durp. - most people