A video so ironic my head just exploded

Hello and welcome to another week of AwfulVision™! This is possibly the best week ever: there will be videos posted and perhaps even words written regarding those videos. We will laugh, cry, and rejoice in our failings and the failings of ourselves as a race. There will also be punch and pie afterwards, so make sure to stick around for the after party. 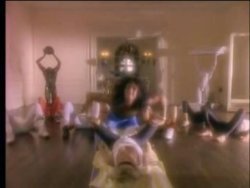 When doing the Paul Stanley Excercise Program, be sure to carb your shit up with some rohypnol!For those of you who don't keep track of Youtube statistics as I'm forced to while Lowtax holds a gun to my mothers head, ironic videos account for something like 105% of the videos on Youtube. I realize, of course, that most of you aren't math wizards like I am, so that's basically saying that if tomorrow 5% of Youtube's "ha ha it's ironic!" videos vanished from the face of the earth to join our Lord and Savior Jesus Christ as he battles Hitler in Hell, Youtube would still be composed entirely of ironic videos.

Whatever happened to just laughing at things for their own merits? I mean, I think this video is hilarious but not hilarious in the way that makes me want to pause my From First To Last mp3 I have queued up on Winamp, swoop my emo bangs out of my face and think to myself "Holy SHIT, what if Hot Topic sold a shirt of this?!"

This video is hilarious because Paul Stanley has sex with lots of girls and probably has VD. It is a very real possibility that he is suffering from dementia brought on by end-stage syphilis, and to add insult to penis injury, It possibly burns whenever he pees and whenever he doesn't pee (but not nearly as badly as the thought of his own irrelevance apparently burns in the back of his mind).

And that, my friends, is real comedy.

"So funny. Paul is such a homo. Hahaha."
-PutOutTheLights