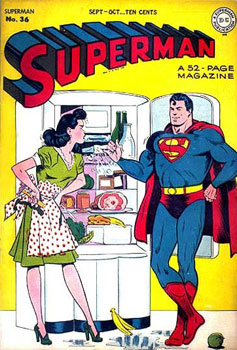 "How Superman Spends His Days Off"
Superman Vol. 1 #36

With all the problems going on across the globe you'd think that Superman never gets a rest, but this issue proves otherwise! See how the man of steel spends his free time!

Superman: Ooops. Looks like I dropped another jar, Lois. Heh. Heh.
Lois: Will you stop already? Please close that refrigerator door, you've been holding it open all morning!
Superman: Whatever. When you're done cleaning all this up, come to the bathroom. I'll be lounging against the sink and squeezing a tube of toothpaste onto the carpet. 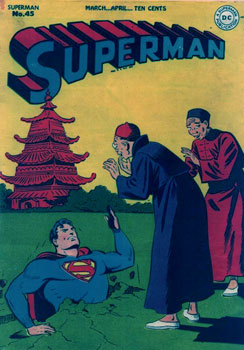 "Superman's Power Of Flight Is Reversed In China"
Superman Vol. 1 #45

A trip to China has Superman down... literally! Will the inexplicable reversal of his flight power leave him six feet under?

Superman: So it's been opposite day all along, and this has nothing to do with China?
Cio-Cio San: No!
Superman: (spits out a mouth full of noodles) A-wha?
Everyone: Hahaha! 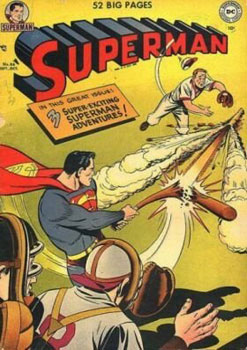 When Superman's bat breaks during the World Series, his bid for a spot in the Baseball Hall Of Fame is thrown into jeopardy! 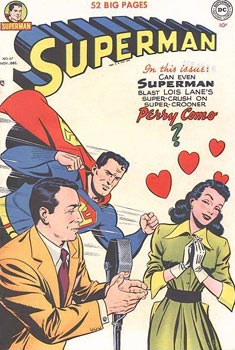 No lady can resist the romantic crooning of Perry Como, including Lois Lane! How can Superman possibly compete with this ladies' man?

Perry Como: (singing) Ooooh sweetheart, my ladybird, my hooooneypieeee....
Lois Lane: Oh, Perry! You're the dreamiest!
Superman: That Perry Como fella sure boils my blood, but I can't punch him in the schnoz for singing. I know how to handle him! Let's see that jerk try to romance Lois when her face is covered in bruises. 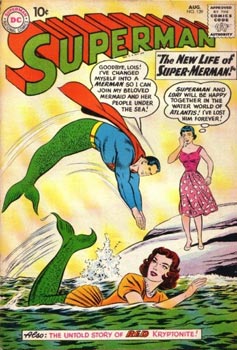 Superman ditches Lois for a sizzling hot mermaid, using one of his little-known powers to transform his legs and reproductive organs into lumpy scales and a fish tail even though he could effortlessly propel himself through the water as he does through the air. Will his new life under the sea with a fishy vixen be everything he hoped for?

Fisherman: You won't believe the size of the bastard I reeled in the other day.