This article is part of the TerrorBear series. 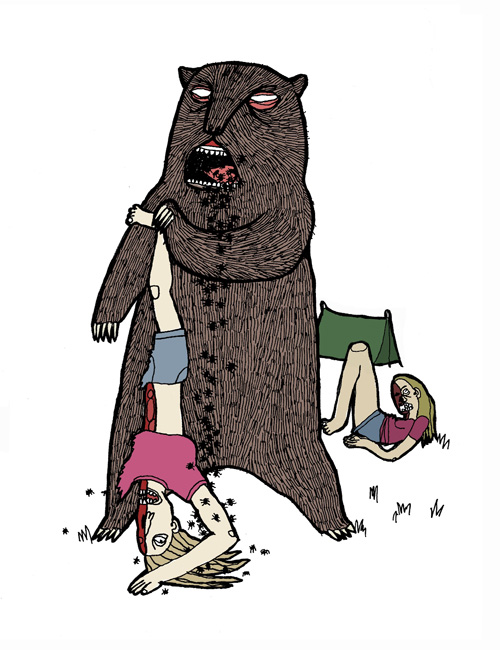 "Terra and Julianne are gone.

It has now become apparent that following this hell-spawned evil was a mistake. At around noon on the fifth day of our observation, we decided we'd had enough. A person can only follow a spider-laden road of fire for so long. Julianne made the suggestion that we turn back, follow the flames that led us to where we found ourselves, and report our findings to the college. We trekked southeast for nearly three hours before deciding to stop and eat/rehydrate. I approximate that we had been settled and resting for nearly an hour before Alex made a disturbing discovery. About 120 yards northwest of our camp, Alex noticed the TerrorBear we had been following. It seemed as though it had now in turn begun to follow us. It showed no signs of aggression... it just stood there.

We waited for upwards of another two hours. Not once did the beast move. There it stood, upright, gazing blankly in our direction. The girls, suffering from mental and physical exhaustion, began to panic. I suggested that we offload a few of our heavier belongings, pack up our notes, and sprint as fast as possible downhill toward our starting point.

Having jotted down a few last notes, hydrated as needed, and snacked on a few berries, downhill we sprinted. The lack of sleep over the past few days, coupled with the surge of adrenalin, created a very surreal moment of fleeing. I'm not sure if we ran for 2 or 200 minutes. At one moment, well into our run, Julianne shrieked out "Terra!" No one stuttered or halted in their forward progress, but we all glimpsed back to look for where Terra had gone. There, about 500 feet behind us, we watched Terra pulling herself from the ground. I guess she had fallen. The second she had stabilized herself, the TerrorBear passed through the center of her body as though she were a fleshy portal. Nothing remained. What once was my classmate and close friend had dissipated into a cloud of fine red mist.

The horror of such a sight destroyed us. Alex, who had taken a slight lead over the rest of the group, collapsed to the ground. With our eyes still behind us, entranced by the forwardly jaunting bear-demon, Julianne and I tripped over Alex as he lay trembling on the forest floor. Making quick haste in my recovery, I noticed that as we had fallen, the TerrorBear had halted his forward progress. There again he stood, only a few hundred feet from us. His white eyes gazed aimlessly forward while spiders continued to gush from his frothing maw. The raspy, hellish, burbling sounds ... why won't this fucking thing quiet itself!

Frozen in our panic, we decided that the best course of action might be to actually rest. What else could we do? We retreated and it followed. If this thing wants to kill us, it will. For nearly ten hours we took turns resting. Two of us would sleep, while one kept watch and took notes. Alex held watch first. I'd like to say the opportunity to rest was well spent, but from the moment my eyes closed, my mind raced with nothing more than intensely visceral nightmares. All manner of death, punishment, torture, and pain filled my head ... and all with one central theme ... that goddamn TerrorBear. In and out of sleep I snapped. At one moment I woke to catch the 'changing of the guard' between Alex and Julianne. This would be the last time I wou..."

ALEX LENGWORTH: Calm the fuck down man ... (inaudible) ... for eight days. Eight days. We were supposed to be out here for what, 5 days? Someone has to be looking for us. Have you tried your cell again?

BARRY COHEN: It's as dead as we are man. What would I fuckin' say anyhow? "Come find us somewhere in Beacon Rock? We're out here somewhere? Look for a flaming path of bear prints?" Deal with it Leng, we're dead.

ALEX LENGWORTH: What are you writing?

BARRY COHEN: Nothing ... just (inaudible) ... and with the whole Terra thing. This shit has to be documented. With what happened to her, then with Julianne ... someone is going to find this shit one day, and it's only reasonable to put on paper what happened. I'm sure their families are gonna want to know. Shit ... who's gonna document what happens to us?!

ALEX LENGWORTH: Well I have the tape running. Maybe we'll get lucky and die on tape!? (Laughter)

BARRY COHEN: Pardon? Do what?

ALEX LENGWORTH: Julianne ... she's bifurcated from the groin to the neck ... how the hell could something do that to a person?

BARRY COHEN: It's a fucking TerrorBear dude. A TERRORBEAR. I would imagine if something can be classified as "terrible" then that fuckin' thing is capable of it. It's in the name ... fuck, my pen is out of ink. Have you got a pen?

BARRY COHEN: Why don't you go ask him? "Hey there, ya big spider-spitting bitch. Why'd ya fuck my friends up like that?" I'm sure he would be reas...

ALEX LENGWORTH: You don't have to be a dick, you know?

BARRY COHEN: (inaudible) ... sorry, man. Trying to get this stuff jotted down.

ALEX LENGWORTH: What exactly are you writing about?

ALEX LENGWORTH: HOLY SHIT, WHAT THE FUCK IS .... (screaming)

"This great Nation will endure as it has endured, will revive and will prosper. So, first of all, let me assert my firm belief that the only thing we have to fear is fear itself..."

Many thanks to Ali Horn for risking life and limb to sketch the TerrorBear in its natural habitat!

TerrorBears exist to lay waste to this world.