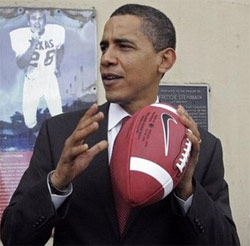 The BP oil spill has just about everyone upset at the government and President Obama. The liberals are mad that he isn't doing enough and the environment is being ruined and the conservatives are upset that he isn't doing enough and plans to drill more oil wells are being ruined. Dolphins are probably the most upset, but they don't reliably vote and they tend to sink their money into weird PAC lobbying for marine hamster tubes and saltwater channels to be dug all over America. Nobody listens to them much after the Iraq war anyway.

On an emotional level I can understand why everyone is frustrated: the last time something this bad happened to the Gulf region HBO's Sunday lineup was punished with Treme. I don't know if the DVR ecosystem will be able to survive another blow like that if it creates a "TV desert."

On a rational level I just don't get it. There isn't much Obama can do that he isn't doing. The oil companies are the only people who have the creepy deep sea robots and streaming webcams and buckets full of mud to handle a situation like this. We have awesome nuclear submarines, but all of our enemies are on the surface, so unless Admiral J.J. Navy can figure out how to flip a submarine and shoot missiles straight down into the oil hole I don't think the US government can help. 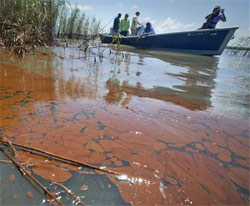 Obama could fly down to Louisiana and towel off a beach, but this isn't like Katrina where there were a bunch of obvious things that needed to be done, like giving people bottles of water and asking sheriffs to stop shooting refugees on bridges. Obama could row a boat around and brush a turtle's teeth and it's not going to make a bit of difference. People will see him in hip waders frowning and massaging an otter's breasts and they'll say it's a cinical photo-op. And it would be.

That was my thinking until about a day ago, when I remembered an experience from when I was about ten. I was playing Peewee football at the time and I was a fullback. Not a fast runner, but I didn't cry quite as much as the other kids when I got hit. Coach Warsaw pushed me hard, but I was really bad at football. I would run through the wrong holes, ignore the blocking, and generally get distracted while I was playing. Coach Warsaw constantly yelled at me to "Focus!"

"You've got to focus," he would say. "Pay attention to where the ball is in relation to you."

During scrimmages it got to the point that coach would yell "Focus!" at me while we were playing. Was it embarrassing? Maybe in hindsight, but in the late 1980s everyone was busy being constantly embarrassed by how terrible everything was. Eventually, I learned where to run and how to pay attention, and I would like to think that my coach screaming "Focus!" at me was the most important factor. 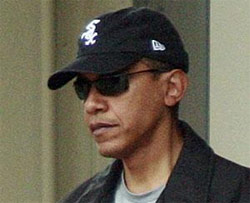 What we need in the Gulf right now isn't a Presidential photo-op, it's a coach yelling, "Focus!" That is why I am proposing President Obama put on a track suit, Blublockers, and a pair of British Knights shoes and get a stop-watch, a whistle, and a baseball hat from a storm window company (this worked for Coach Warsaw), and have his Secret Service bring a couple mesh bags full of footballs.

Fly down to the Gulf of Mexico, take a helicopter tour of the problem areas, and whenever something important is happening he needs to land and start coaching. He can fly down to the BP ship where they're doing the "top kill" procedure, blow his coach whistle, and then start yelling "Focus!" at all the guys working on the mud cannons and buckets and whatever else.

No reason Obama should limit himself to "Focus!", Coach Warsaw had plenty of other great phrases and coaching techniques that Obama could employ in the Gulf of Mexico. 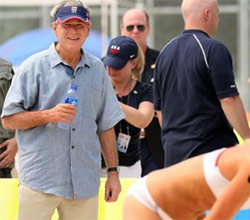 Whenever Obama is getting a pass from the media (he's not anymore) a lot of Republicans like to indignantly say, "If that were President Bush the media would be going nuts."

I don't know if that's true, but it makes me think that maybe we had the wrong president for the wrong disaster. Maybe they should have been reversed. Obama would have taken care of people stranded during Katrina and, as for Bush, no president has ever reminded me more of an asshole football coach.

You can bet he would have been down there in the Gulf three weeks ago, jumping at the chance to throw helmets at people and make up nicknames like "Legs" for the guy who lost his legs to diabetes and "Look Who's Talkin'" for the pre-op with the soft, high voice.

Remember the stupid nicknames? It's okay to admit it. You miss him. You miss goofy, dumb old Coach Bush.