Nazi Bunker
D-Day 1944
On the Outskirts of MISSION AREA

Bunker "Do you ever get the feeling," he paused and shifted the weight of the rifle, "that we're just actors in a play meant for someone else?"

"Nah," the other man replied, "we just follow orders."

The bunker shuddered from the impact of a distant explosion and loose dirt hissed down from the timbers overhead. The soldiers inside the bunker were used to the whistle-thump of the artillery. Shells landed nearby every 14 seconds. Precisely.

"What's your name?" The first man asked the other.

The other man lifted his SMG up so that the first man could see it.

"Ah," the first man replied, "I am just Nazi Soldier. I always wanted one of those guns you guys have."

"Yeah," Nazi Assault Trooper agreed, "they're pretty nice. There are some guys in the bunker across the trenches that have machinegun rifles. I don't know their names though. Didn't seem too friendly."

"Who is that guy over there?" Nazi Soldier asked and pointed in the direction of a third man who was walking in place behind a crate. 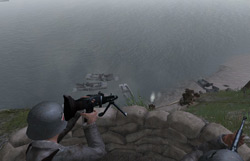 Meanwhile... "Looks like he's trying to walk through those crates," Nazi Assault Trooper shrugged. "He's an officer so I guess he can do whatever he wants."

The two men crouched without speaking for a time, listening to the regular thump of the distant artillery and watching the darkened hallway of the bunker.

"I don't-," Nazi Assault Trooper said in the same instant.

"No, you," replied the Nazi Assault Trooper.

"Oh, alright," Nazi Soldier agreed, "I was just going to ask what exactly we're supposed to be guarding."

"The hallway, I think. The Americans are going to come down the hallway and we have to shoot them."

"Yeah, but why?" Nazi Soldier pondered. "There is nothing back behind us but another tunnel and that opens out onto…"

"Oh, right, the ones with the glowing yellow boxes on them shaped like dynamite."

"Yeah," Nazi Assault Trooper nodded, "those weird boxes, like ghosts or something. I wonder what they're for."

"Maybe Nazi Officer knows," Nazi Soldier raised his voice. "Hey, Nazi Officer, what are those glowing yellow boxes on the artillery guns for?"

The Nazi Officer just continued walking in place against the crates.

"I think something is wrong with him," Nazi Assault Trooper observed.

There was a pause and both men strained to hear the distant rattle of machinegun fire. 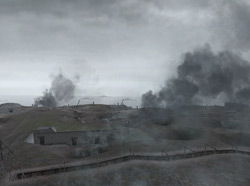 Meanwhile... "We still have a while," Nazi Soldier observed, "I haven't heard the two artillery fields they have to go through. Those have to explode first."

"How are we going to stop these guys?" Nazi Assault Trooper asked.

"Hopefully that tank that's waiting behind the fence outside will stop them. I overheard the tank and it's going to bust through the fence and start shooting. How can the Americans hope to stop a Tiger tank?"

"Maybe," Nazi Assault Trooper seemed unconvinced, "but I saw some of those machinegun guys putting a rocket launcher and some rockets in the trench right in front of the tank. It seemed like a good idea to me at the time, but looking back it really makes no sense."

Nazi Soldier was about to agree that is seemed to be a bad idea, but both men fell silent at the ominous thundering of the first of the artillery fields exploding. Neither had to voice their concern about the progress of the Americans, they just looked at one another knowingly.

"Where are you from?" Nazi Soldier asked to break the silence between the two men.

"Back there," Nazi Assault Trooper jerked his head in the direction of the artillery. "Same as everyone."

The Nazi Assault Trooper wrinkled his nose and sniffed. 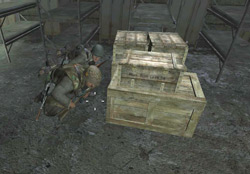 Bunker "That's the thing," Nazi Soldier said, plainly troubled, "I don't know if I do or not. I have this feeling like I do, and it seems like I came from a town and went to Nazi soldier school. I have training from somewhere. But I can't remember anything other than this bunker and D-Day."

"Yeah," The Nazi Assault Trooper agreed, "same for me. It's weird."

"Let me turn this radio on," Nazi Soldier stood up and walked over to a small radio, "maybe someone will say something."

Nazi Soldier turned the dial and some soothing music began to play, but it was only a few seconds before it started over again. He turned the dial again and a voice immediately began shouting.

"We are fighting for the greater German people against the intrusion of the Bolsheviks and the interference of international Jewry! Soldiers of the Reich, you must never take a step backward from the assault of Jewish king Rosenfeld and his slave soldiers. Victory will be ours and-"

The voice interrupted itself mid-sentence and the whole thing began to repeat.

"I feel like I know who that guy is, but I don't know what in the heck he is talking about," Nazi Assault Trooper observed.

"Yeah," agreed Nazi Soldier as he switched off the radio, "and everything just keeps repeating like that."

"Come to think of it, I have a feeling we've been through all of this before," Nazi Assault Trooper was suddenly concerned. "How else would you remember the artillery explosions signal the Americans coming?"

"Yeah, you're right," Nazi Soldier pushed his helmet back on his head and scratched his brow thoughtfully. "Maybe we're trapped. Like everything will just keep repeating until we figure a way out of this."

Meanwhile... "That could be it," Nazi Assault Trooper stood up. "Maybe we should-"

With a roar of explosions the second artillery field detonated. Both soldiers looked up at the ceiling and the increasing volume of gunfire coming from above. The Nazi Officer turned slightly, but continued running against the crates.

"The tank is all that's left between us and the Americans now," Nazi Solider observed. "We should get back to our cover."

The two soldiers crouched down behind the crates. Nazi Soldier suddenly spotted some movement at the far end of the hallway.

"What's that thing moving at the end of the hall?" Nazi Soldier whispered with concern.

Nazi Assault Trooper leaned around the edge of the crates to have a look. He ducked back behind the cover of the crates.

"You just noticed that?" Nazi Assault Trooper asked with a smile. "Those are bandages. Someone left them in the middle of the hallway like that and they're just spinning around and around."

"With all these cabinets and shelves down here? They just left perfectly good bandages hovering in the air?"

"Maybe we should get them in case we get shot," Nazi Soldier stood up, "I'll bring them back over here." 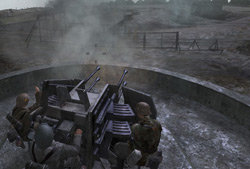 Meanwhile... Nazi Soldier walked over to the bandages, but he could not pick them up. Every time he reached down to grab them his fingers simply passed right through.

"What the heck is going on?" Nazi Soldier wondered aloud.

There was a crash above them and the sound of grinding tank treads. The tank's cannon boomed very near to the bunker's entrance and its percussive thump echoed down the hallway.

"Forget about those, get back here," Nazi Assault Trooper checked his SMG.

Nazi Soldier hurried back behind the crates and aimed his rifle down the hallway. The tank fired again and machineguns buzzed.

"You know, there's a radio down a side hallway behind us," Nazi Soldier suggested as he continued to aim down the barrel of his rifle, "I could call for backup."

"You mean that radio with all those papers in front of it?"

"The one that's glowing yellow and has never been used by anyone?" Nazi Assault Trooper added a sarcastic edge to his voice.

"Uh," Nazi Soldier stammered, "yeah. Yeah, okay. You don't have to get snippy with me."

Suddenly there was a pop followed by a strange wooshing sound. Nazi Soldier cried out that it was the antitank rocket being fired, but the explosive roar of the rocket hitting the tank drowned out his words.

"They'll be coming!" Nazi Assault Trooper shouted over the receding din. "Get ready!"

"This is our chance to stop this cycle of repetition!" Nazi Soldier shouted back. "We have to stop the Americans here and now!" 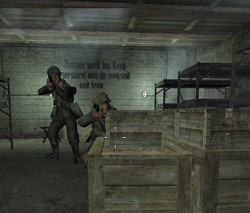 Bunker They heard shouts in a foreign language and then a thump of boots, as if a man had just vaulted down all of the steps descending into the bunker. A man rounded the corner, his eyes filled with fire. To the pair of Nazi soldiers he seemed to be a demon or force of nature. His tattered Army Ranger uniform was holed in two dozen places by bullets. His chest was covered with blood, yet he seemed unimpaired. Fire roared from the barrel of his Thompson and bullets tore into the crates the Nazi soldiers were using as cover.

"Together!" Nazi Assault Trooper screamed over the deafening rip of the Ranger's SMG. "When he reloads!"

Nazi Soldier nodded and they both waited for a pause in the wild firing. Seconds later the shooting stopped and they heard the click of the Ranger fumbling for a new magazine. When they popped up over the crates, however, they heard instead the distinctive ping of a grenade hitting the floor near to their feet.

Nazi Officer was freed from his journey into the crates and he leapt forward, scooping up the grenade and throwing it back at the American. The Ranger dodged away from the explosion and fired with his Thompson, tearing Nazi Officer to pieces.

Inspired by Nazi Officer's sudden burst of heroism, Nazi Soldier and Nazi Assault Trooper began firing at the American. The Ranger charged at them, heedless of danger. Their bullets slashed into his chest, but the maniac kept coming, straight at them. The Ranger squeezed off a burst with his SMG, sending Nazi Assault Trooper tumbling backwards in a spray of blood.

The American was right on top of him. Nazi Soldier fired from his rifle, striking the American in his already-perforated chest. The American staggered back. With a howl of desperation and rage, Nazi Soldier struck the Ranger with the butt of his rifle. To his surprise the American grunted and fell onto his back.

"We did it!" Nazi Soldier cried.

"We stopped the American!" Nazi Soldier cheered. "The cycle is-"

"The quickest way of ending a war is to lose it."
- George Orwell

The bunker shuddered from the impact of a distant explosion and loose dirt hissed down from the timbers overhead. The soldiers inside the bunker were used to the whistle-thump of the artillery. Shells landed nearby every 14 seconds. Precisely.

"Nazi Assault Trooper," the man replied as the bombardment died down, "and I would guess that makes you Nazi Soldier."