The Secret Road to Money Heaven

Becoming a homeowner or a business owner may be one of the most daunting things you ever find yourself faced with. There's paperwork to fill out and stuff you need to know and people wearing ties you have to impress, but most importantly, there's money involved. Lots and lots of money. More money than you'll ever have, and it's all swirling around you in the form of three-dimensional dollar signs that whip around your body just outside your grasp like a tornado made of punctuation. I don't know if that last part actually happens because I saw it on a commercial, but the fact remains that money is out there and you're going to need more of it.

"How am I supposed to get some of that money?" you could be asking. "I can't just reach out and grab a tornado, it's made of clouds and pieces of broken barns." You don't have to grab a tornado to get rich! What you have to do is simple: Make your property work for you. The easiest way to do this, of course, is to open your own summer camp. "But dumbass, summer is almost over!" Fair enough, but don't forget that A) you own a building and B) buildings are indoors. You can run a camp all year long if you want. Neither the harsh rays of the summer sun nor the paralyzingly cold shock of icicles stabbing down on your shoulders and face are a threat to you anymore, because as a property owner you have defeated the elements. Certainly, someone with such power over nature can afford to at least try to run a summer camp, unless you're some kind of pussy.

Your property or business doesn't even have to have any nature in it to succeed as a summer camp, so forget ordering a canoe and learning campfire songs. Improvise! Make it into a theme camp, tell people it's fun, and then prosper. They've been doing it that way for years. Ever hear of math camp? Me too. I've never been to one, but from the name I'm guessing it's like a classroom with beds instead of desks. Nature isn't anywhere near it. They also have computer camps and even video game creation camps. Don't even try to tell me that Levelord is taking campers out on 6-mile hikes, that shit is just not happening. Proof positive that you do not need nature.

By now you probably have some idea of the kind of camp you're going to run, and that's great, but the money will never come unless you can sell it to people. You've got to make it sound fun and exciting and it has to be the best thing to happen to summer camp since that episode where Donkeylips took his shirt off. There are only about 80,000 summer camp databases on the Internet, so you should probably get started. With a little bit of luck and a little business in your blood, maybe someday you will join the ranks of the improvised summer camp elite: 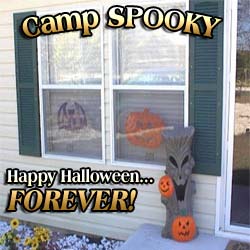 Description: Boo! It's Fright Night 365 days of the year at Camp SPOOKY! Established in 2004, ours is a one-of-a-kind camp designed with the fun-loving child in mind. This year, let him or her be whisked away to a land of frightening adventure unlike anything they've ever seen! Campers will enjoy "roughing it" while they stay in our exclusive Spook Room, a former guest bedroom with authentic cobwebs in which the camp owner's aunt passed away four years ago -- an authentic so spooky that most people, including junkies, refuse to rent from us. But that's not all, we added extra spookiness when we removed the Spook Room's lightbulbs and installed a brand new, state-of-the-art TV / VCR combo that plays the classic 1989 film Beetlejuice over and over for a truly unique SPOOKsperience! Not scary enough for you? Brand new this year, camp owner Jason's live-in girlfriend may occasionally provide an extra burst of adrenaline when she has one of her terrifying "Monster Mood Swings." Campers will enjoy a view of a lovely new concrete driveway, several hundred feet of Fallbrook Ave., and six different trees. Climate during summer is generally warm, however, three nights a week our sprinklers automatically turn on and one of them sprays the bathroom window a bit, providing a convincing feeling of a rainstorm at that end of the house.

Original attractions and activities: Creepy Creaking Closet Door, Treadmill of Terror, and our most important game, Hide from the Houseguests. 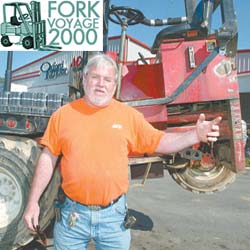 "We lift more than just your spirits!"

Description: Learn the ins and outs of warehouse operation when you spend your quality time here at Fork Voyage 2000. We provide the warehouse complete with forklifts, you provide the fun! Thousands of square feet of space is just waiting to be explored. We have 8 operational lifts with an extra 3 that can be used for parts should the need arise.

Original attractions and activities: World class training in forklift operation comes standard from Willy, FV2K's trusted friend who lives on site. Willy moved to the Fork Voyage 2000 complex after the last tenant company here went bankrupt and he lost his job with them. That was over seven years ago. He still insists he works here even though we don't pay him, bless his loyal heart. And hey kids, ever think about becoming an engineer? Instead of boring normal bunks like they have at other camps, you'll learn how to design, construct and sleep inside your very own "human rat nest" made out of scraps of foam insulation. Now there's something they won't teach you at ForkQuest or LiftCorp's Summer Fork Academy!

New rules for 2006: We regret to announce that campers will no longer be allowed to form factions, and any type of "fork battles" for food, resources, or honor will be strictly prohibited. 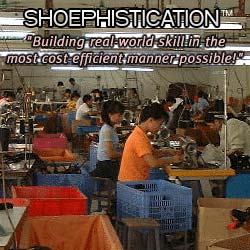 "Building real-world skill in the most cost-efficient manner possible!"

Description: Good morning, campers! Have you ever wondered what foreign countries are like? More importantly, have you ever wondered how shoes, purses, and other leather goods are produced? Sign up with Shoephistication to travel the world and learn from the professionals! Our highly trained staff can show you how to work an industrial sewing machine like it's a toy, and you'll be producing your own items on the very first day! Learn all about the spirit of teamwork in the break room / restroom when your floor supervisor explains how friendly competition between production-siblings leads to a sphere of cooperation and caring that surrounds the entire manufacturing facility.

How many wallets do you think you could sew up in a single 16-hour day? 80? 100? Enjoy a thrilling race against time and your new friends and find out who has what it takes to make it in the world of mass production. As an added bonus, anything you produce willingly during your free time and is found to be defective, you can keep! Think of it as a souvenir you can actually use! 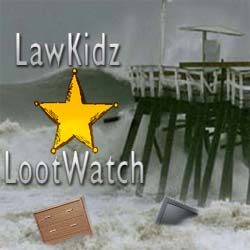 "Peace through the unlikelihood they'd hurt a kid."

Description: Situated just a few short yards from the ocean in lovely southeastern Florida, the LawKidz LootWatch beach house is more like a luxury resort than a camp. Learn necessary crime prevention skills while you have fun! Boarding up windows, staying awake for days at a time, safely wielding a firearm -- All of these abilities will be second nature to you after your LootWatch experience! We're looking for one very special camper to join us as soon as possible. My family and I have already evacuated ahead of the storm, but call us and we will give you detailed directions over the phone to help you reach the LawKidz campground. Once there, we'll tell you where there's a house key buried in the yard and where you can find $80, which should afford you all the supplies you'll need to complete your mission at LootWatch and become and honorary LawKidz CrimeBuster Deputy.

(Sorry, we cannot accept campers under the age of 10.)

Good luck, brave entrepreneur! You're going to need it to roll with these cats.