Let's face it; when it comes to writing comedy articles, original ideas are hard to come by. You try to be inventive without being too vague to everybody but you and your pet cat Professor Plum, but at the same time you don’t want to shovel out the same old formulaic drivel over and over again. I could sit down and try to come up with something utterly fantastic, like Livestock’s Hot Dog Eating Contest, but that would require far too much effort, and that my friends is unacceptable.

One of the major problems I have with my writing is that I work full-time at the corporate headquarters of a large and aggressive company. Daily meetings are only formed for the expressed purpose of deciding when the next meeting is going to be, the atmosphere is thick with mistrust and fear. The high paced world of business is no place for a creative and independent soul, and unless you cleverly camouflage yourself like one of the other mindless drones, you will be singled out and destroyed by Japanese samurai robots with ruthless efficiency. During these long meetings, it's as if the squirrelly little man in the $500 suit, who is deliberating in a monotone fashion, is leaping onto me and draining all the precious creativity out of my neck with his vampiric fangs of business. When I get home from work I don’t feel like putting on a WW1 spiked helmet, playing some Journey, and writing some brand new, off the wall comedy. I open a beer, play some Bob Seger, and clean my shotgun with a tattered old American flag until I pass out, only to wake up the following morning, hurry out of my apartment and into the hell that is rush hour traffic. It has crossed my mind to quit my job and devote all my time towards comedy, but then I realized that I like to eat and have shelter. It is quite a predicament.

What I need is to get away from the dull world of capitalism and the motivation killers of video games and needlecraft I have at home. I need a good session of idea producing that will save my sinking Internet career so I don't have to go back to telling jokes on street corners for giggles and handjobs. If I can go on a blitzkrieg of comedy with the aid of nature's candy - powerful illegal drugs - it might hold me over until mid-summer, or even fall. This called for some extreme measures that would require a sacrifice of my sanity, and the risk of permanent damage to my body and mind. I would have to break the law, but as we say in the Internet comedy business, "sometimes you need to crack a few eggs to make a dangerous bomb inside of a cake". I made a quick list of the supplies I would need for my Idea Factory. 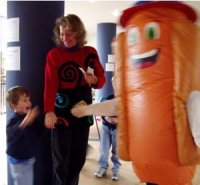 Needless to say, this will only work if I am out of my apartment and away from these electronics that only further sap my energy and creativity. I rented a cheap, seedy motel room in Detroit's red light district that has no television or telephone. That way if there are screams or shouts for help coming from my room, nobody will bother to call the police and I will be left to my craft undisturbed. I'm really not sure what is going to happen in this hotel room, but it is my hope that after being sealed in for a day, there will be enough comedy gold to keep me afloat for a long time, and even maybe create something so genius that it will garner the attention of Hollywood, making me a millionaire writer of popular sitcoms like Will and Grace, and bringing about world peace with hearty laughter. I will be keeping a detailed log of the entire experiment as it happens in real time. Onward, to the Idea Factory!

April 14th, 8:00 AM
Paid for the room in cash. The dirty old man at the counter looked at the suitcase and the bag of farm animals, and gave me an evil look. I told him it was for comedy, but he was like, "Whatever turns you on buddy." Once I got into the hotel room, I moved the mattress and sparse furniture in front of the door and window to prevent my escape. I could not afford any unwanted encounters with the outside world, or it might disrupt the comedy mind frame I will hopefully be immersed in.

10:00 AM
Eureka! After just two hours in the Idea Factory, I’ve already written a masterpiece of a comedy bit. I smoked a few marijuana cigarettes, sat down with the pad of paper, and the ideas flowed out of me like sweet wine! If it keeps up like this, I will have enough material to launch my own comedy website that will catapult me to the heights of stardom!

10:02 AM
I just realized that my first idea was based off a Perfect Strangers episode I watched a few days ago. It was the one where Balki joins a bowling league with Larry and he does that wacky dance every time he does it he gets a strike, and then at the end he has to make that split shot to win. Yeah, so anyway, I’m starting over.

11:00 AM
I’m not really getting anywhere and I’m pretty bored, so I’m going to take a lot of random drugs and see what happens. I have the tarp laid out and have my crayons and plastic farm animals nearby. I will try to update this journal as long as I’m not busy pumping out comedy like a well-oiled machine. 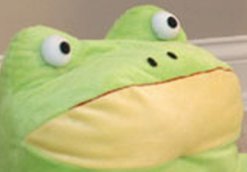 11:30 AM
Starting to feel pretty crazy. I've been dancing to some Kraftwerk and then I drew a picture of a green walrus with my crayons. Right now I'm just fleshing out ideas between some acid and Slim Jims. I was thinking about doing an article about breakfast and how it's really weird that having bacon and donuts are ok in the morning, but it's regarded as strange when you have them at dinner. What's the difference? I could get into a crazy breakfast adventure that would result in something burning down or exploding. Progress is being made!

Noon
I just came up with another idea! What if I did an article where I pretended that the front page was my yard, and I am I a curmudgeonly old man yelling at the readers like they are no-good trespassing children. I would complain about them cutting across my lawn with their bikes and then threaten to shoot them if they knocked another baseball over the fence. I could even have Lowtax make the background a grass tile for the day to give it a realistic environment. Also I would write it in all of iambic pentameter, just like Shakespeare! Where do I come up with this stuff? Time for some more PCP.

90:03 AD
I'm very afraid and alone. I tried to move the mattress blocking the door but my arms are made of rubbery snakes. They plot against me, ready to strike with every beat of my heart. I think things started going badly when I just took as many drugs as I could and started to write limericks. Then things started to get hazy, and I clearly remember doing Tai Chi in my underwear and punching the mirror, thinking I saw Charlie in the reflection. Every day I stay in this hotel room I grow weaker. Everyday Charlie is squatting in the bush, he grows stronger. I did think of a great article idea about a bunch of people that don't know each other getting on a ship that was only going on a three-hour tour but then a storm stranded them on an island, and many zany adventures ensued. My hand is bleeding!

I learned a valuable lesson this week. Never put your penis in an electrical outlet. But I also learned something else just as important. Laughter comes from the heart; from inside your soul where the voices of singing children echo, and butterflies dance in the morning dew. It cannot be manufactured like a cheap product to be passed on as an honest comedy article. The public will sense its falseness and rise up against you in a fit of rage, tearing you into ribbons, and dancing in your bloody remains, much like how you feel right now. While drugs and self-imposed isolation may create for some interesting thoughts, it is a desperate way to try to get ideas. I'm just going to stick to what I always do and steal them from Cracked magazine.

Oh wait, I found another thing that survived the fire in the hotel room. It looks like Goth poetry. I never knew I was so deep!

I have had enough of self-denial, I am not the one on trial
Its society, I have had enough of this sobriety
I am going to break the chain, no need to explain
You have been applying the screw, and you always knew
That eventually I would crack, and start fighting back
I am starting a new page, the world is my stage
I am throwing away my black clothing, I no longer have a need for self-loathing
What did you expect? I have regained my self-respect. 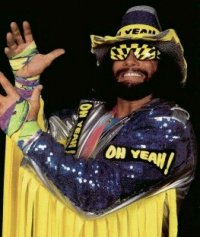 I don't know where my watch is.
I am alive but I seem to have lost my clothes and something smells like it is burning. Somehow my plastic farm animals are all extremely damaged to the point of being non-refundable. The pad of paper I dubbed "The Idea Pad", is full of unintelligible scribbling, and crude drawings. I don't understand much of anything right now but I hope I can decipher it later on. My teeth are really hurting and I think it's because it looks like I've been gnawing on the carpet. I think I was trying to tunnel my way out because my arms weren’t working. HOLY SHIT A PIXIE!

9:20 PM
Starting to come down now. I caught a glimpse of myself in the shards of glass littering the floor, and almost screamed. I'm wearing the Macho Man Randy Savage outfit and my hands were stuffed into pillows. I think this was probably because I thought they were snakes and did not want to get a poisoned bite. The mattress covering the door has a hole burrowed through it, springs and stuffing sticking out every which way. I seem to recall digging through the mattress with a charred plastic pig, until I escaped into the fresh air of freedom. I also now recall finding a hooker in the hotel parking lot and giving her a Macho Man super slam onto the pavement and shouting "Ohhhhh Yeaahhhh!" and then fleeing back into the hotel room through the hole. As for the Idea Pad, it has been charred beyond recognition, and with it any ideas that may have been written in its pages are lost forever. There is just one piece of paper the survived the Idea Factory, and I must admit that its comedy potential is not very good. I might as well show it since I went though all this trouble.

The Idea Factory may have been a total failure, but at least I can confidently say that I found something out…about myself. Good night and God bless.