What an incredible week it has been here in the damp, cramped offices of Current Releases. When the least-appreciated movie of the week is the one you were anticipating the most, you know something has gone wrong. Or should that be right? Seeing as how Skyline and Morning Glory both turned out to be extremely good films, I see no reason to complain either way.

Most Movies Try to Avoid the Term "Train-Wreck", but Unstoppable Makes You Beg For It.

EXPECTATIONS: Since the first trailers for Unstoppable, I couldn't wait to see it; not necessarily because I give two shits about Tony Scott or Denzel Washington or Captain Kirk, Jr. No, the real reason I'm excited as hell for this movie is because Unstoppable looks like a perfect throwback to the kind of serious yet completely go-for-broke action spectacle they used to love making back in the '90s. I can't imagine there's actually a villain in this film, so comparisons to Speed probably wouldn't be appropriate. At any rate, it's a movie about a bunch of people trying to keep a speeding vehicle from destroying every fucking thing in its path.

It's a simple concept and I can't wait to see how it all unfolds.

REALITY: After it turned out nobody gave two shits about last year's The Taking of Pelham 1 2 3, Denzel Washington and director Tony Scott apparently wanted to give trains one more shot before moving on to other ridiculous action cliches. This time, though, they decided to switch over from trains nobody rides because they smell like pee to trains nobody rides because they haul hazardous waste. It's not as enthralling as I was hoping. 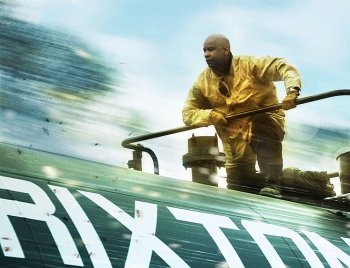 Whoosh! Denzel Washington starts to feel that he may not have been the best choice for Spock.During a routine morning of train moving (or whatever the hell it is these people do), a pair of fat morons (Ethan Suplee, TJ Miller) accidentally let a train hauling several tons of molten chemicals get away from them while moving at a snail's pace. It's not long before the train is barreling down the tracks at 70 mph and thousands of lives are in danger. Meanwhile, two rail-workers (Denzel Washington, Chris Pine) are informed of the death train speeding their way, and decide to chase it down and stop it using a train of their own. While this is going on, other characters such as police officers, Hooters waitresses and railway coordinators (Rosario Dawson) stand around watching the whole thing on TV.

Based on a 2001 event wherein Ohio rail-workers stopped a runaway train, Unstoppable is a movie less concerned with carnage and destruction than one might expect. The trailers suggest that the movie is about a train smashing into any and everything in its path, when in reality it's more about witnessing how many times a train can narrowly avoid any number of unique roadblocks and keep on chugging. 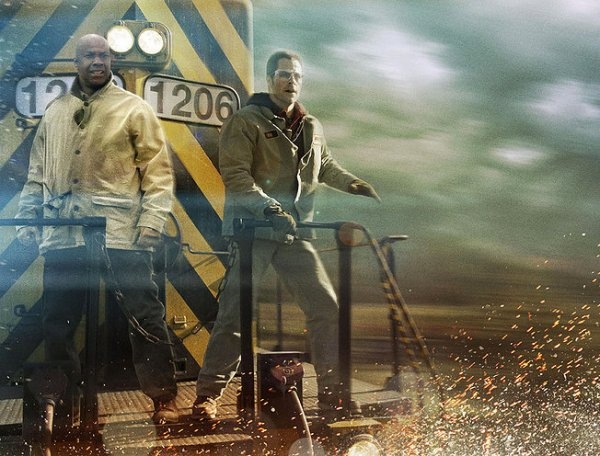 If I have any complaints about Unstoppable (and I have a few), it's that not enough property gets destroyed. It's a sad but true fact that we go to see these movies because we like watching the carnage unfold. To hell with the heroes trying to prevent it; deep down you want to see this train catch on fire and smash into a teddy bear factory (please note, this is never actually a situation in the film. No teddy bears were harmed in the making of Unstoppable.) It's like George Carlin said: We always want to see it get worse. That's the whole fun of a movie like this. Unfortunately, the filmmakers decided to follow the true story a little too faithfully on this part. The only carnage we see is a result of human error. And not the kind of human error that results in a runaway train; the kind of human error that texts while driving and accidentally crashes into a roadblock.

For the most part, though, Tony Scott does a pretty good job of keeping the tension high despite the relatively low body count. If his characters aren't standing around watching trains speed past, they're driving the trains or coordinating shit from a control room. That's his cue to keep the camera revolving around his actors. It's his way of showing that things are happening when they're not actually happening, and much to my chagrin, it's actually pretty effective. It looks like Denzel and Kirk, Jr. are discussing important train stuff because the camera is somehow spinning around them in that tiny cab; if you pay attention, they're really just talking about why Denzel doesn't care that his daughters are working at Hooters. Tony Scott's style is easily the best thing about Unstoppable; it's the reason that such a boring story actually winds up being kind of thrilling. 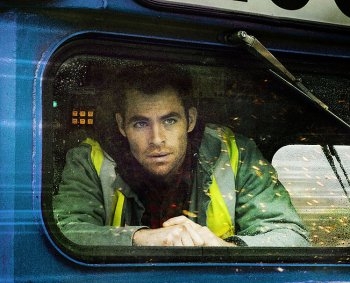 Reflections of sparks and dynamic movement!Outside of rail-workers and corporate executives, news and news reporters take up a lion's share of the movie's screen time. We watch most of the movie's big action sequences through the lens of a local news camera. This would be fine if the movie were trying to make some kind of statement about news and our obsession with watching shit unfold, but it never does. We just wind up watching Chris Pine dangle off the edge of a train car with the giant FOX News bug sitting in the corner. I imagine scenes like this will play much better at home, because on the big screen, it's glaringly apparent that they just took movie footage and put fake TV lines over it to make us think we're watching real news. I don't think anyone in Hollywood has ever watched the news, because it doesn't look anywhere near as fake as that. News doesn't have such impeccable camerawork and editing skills, you idiots. I can't believe I'm asking a movie to shake the camera MORE...

I don't know how well Unstoppable is going to play overseas, as it's pretty inherently American. Not that there aren't trains in France or Pakistan, but I'm fairly certain that only in the US could a film about stopping a speeding train also be about the corporations and labor unions who didn't have the foresight to try and fix it. Then you've got the whole "American Ingenuity" thing. Professor Clumsy can confirm or deny this if he wants, but I'm fairly certain Unstoppable is the kind of movie that could really only happen in the U.S.A.. Europeans are smarter than this. (Except Tony Scott.)

MINORITY REPORT: The reason Unstoppable could never happen in England is because the train would only get about a hundred yards before plunging into the sea. -Ian "ProfessorClumsy" Maddison