Saparmurat Niyazov, You Are My Hero 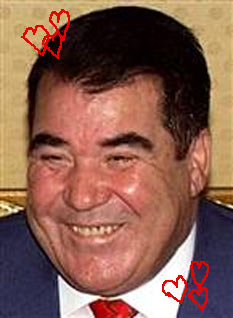 I lurve him!For a time, Ghana's president John Agyekum Kufuor presided over the court of my heart as my greatest and most esteemed hero. After being elected president the honorable mister Kufour addressed his people on the state of Ghana for 100 days. This incredible feat of oratory is, to the best of my knowledge, still unmatched by any statesman or crazy hobo screaming on a street corner. With his passionate words and insatiable lust to hear his own voice, John Kufuor was catapulted to the top of a short list of people I regard as nearly perfect. No more.

Yesterday, while reading various random newspapers from overseas, I happened upon an article about Saparmurat Niyazov, the dictator of Turkmenistan. Great Dictator Niyazov does not have the proud democratic heritage of president Kufour, but he does have a lot of ideas. New ideas. Better ideas. By the time I had finished reading the article the grim contest of my allegiance had been decided; John Agyekum Kufour was yesterday's news. Saparmurat Niyazov was the man for me.

From the short article on Saparmurat I have gathered the following gems of genius that this benevolent ruler has deposited on his people:

Intrigued by the concept of the Ruhnama and already totally in love with Saparmurat after only one article I set off down a path of enlightenment that has changed my entire perspective on life, at least until an even crazier dictator comes along. My first step was to search for "Ruhnama" on Google, which produced a link to Ruhnama.com, the official home of the Turkmenistan national philosophy. From this site I learned that Saparmurat refers to himself as Saparmurat Turkmenbasi, and forces his citizens to recite a blood oath to him. It's a blood oath which is written on the website in Comic Sans.

TURKMENISTAN,
MY BELOVED MOTHERLAND,
MY BELOVED HOMELAND!
YOU ARE ALWAYS WITH ME
IN MY THOUGHTS AND IN MY HEART.
FOR THE SLIGHTEST EVIL AGAINST YOU
LET MY HAND BE LOST.
FOR THE SLIGHTEST SLANDER ABOUT YOU
LET MY TONGUE BE LOST.
AT THE MOMENT OF MY BETRAYAL
TO MY MOTHERLAND,
TO HER SACRED BANNER,
TO SAPARMURAT TURKMENBASHI THE GREAT
LET MY BREATH STOP 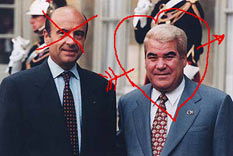 The rabbit hole goes deeper though folks! Using my discerning eye and incomparable powers of deduction I clicked on the link to the one site referenced on Ruhnama.com. This site, called Rukhnama.com for reasons unknown to me, featured beautiful Internet graphics as well as - joy of joys - a huge portion of the text of the Ruhnama in English!

I began to read the Ruhnama, and much to my the opposite of surprise it was completely overflowing with insanity; more madness than even the Bible or Dianetics. Truly Saparmurat Turkmenbasi is a breed apart from us all, as his mind seems to delve into dimensions wholly alien to we mere mortals. Because of my undying devotion for the new dictator of my heart I have undertaken to guide the readers of Something Awful through the holy text of the Ruhnama. I swear on Saparmurat Turkmenbasi that not one piece of text I am about to quote is altered from his benevolent word.

Let's start off by looking at the first three rules of good manners as handed down to Saparmurat by the Prophet Noah.

Okay, so if you don't respect the old and young it's an era of no mercy and you shouldn't look at your parent's faces when you talk to them. I can internalize this easily and in a short time, so let's move along. 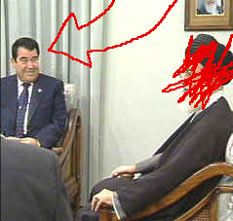 I think he has sort of a Walter Matthau look going for him. It's adorable!By the order of Allah the Most Exalted, as the shadow of the third millennium fell on to us, in 1991, Türkmenistan became an independent state. However, at the outset, this was only on paper. The developing society, state institutions, thinking on national independence, sustainable economy and international affairs shaped by national interest were namely taking shape. The most challenging aspect of this business is to connect individual fate with independence and to understand a roasted or fried meat dish

Yes! I do understand a roasted or fried meat dish!

From such a perspective, it is not possible to see the reality; only semi-reality can be seen. It is obvious that semi-reality is worse than a lie. Individuality is the biggest trap of our era's way of thinking.

This is true. Individuality leads to Hot Topic, Hot Topic leads to anger, anger leads to suffering, and suffering leads to semi-reality. If enlightenment is really what you're after you will find all of your needs met at the Rahnama.com shop. T-shirts only $17.99. Escape from semi-reality free!

If one wished to create a flag of beauty and perfection, then this flag would be a Türkmen carpet.

If one wants to create a model of endurance, beauty and purity, then one should take the Ahalteke horse as an example.

What about an Ahalteke horse STANDING on a Turkmen carpet? That's like the best thing EVER!! It cannot be topped!

No human being who has not experienced what I lived through can understand me.

Your father who is supposed to support you in hard times is dead in an unknown, foreign place!

Your dear mother is lying with your two sisters under Karakum. You are alone in Leningrad. You have no one behind you who is asking about you and writing letter to you.

Okay, come on Saparmurat, you're starting to get a little depressing. Let's try to turn that frown upside down man. 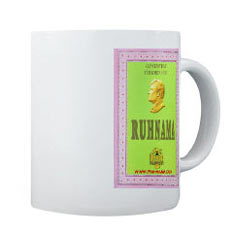 Did someone say Holy Cups?!After about thirty pages of random bits of the Bible and Koran combined with anecdotes and maxims Saparmurat takes a long detour into the genealogy of the Turkmen rulers. Whether these were real rulers or ones imagined by Saparmurat, I will probably never know, but he does have a whole lot of charts that map out family trees. After roughly fifty pages of the genealogy lesson Saparmurat at last returns to his fractured narrative.

Türkmenistan is known for its unique Ahalteke horses, for its carpets that are examples of the wonders of the world's art, and for its limitless wonders of nature. Today, in its peaceful policies, the Türkmen nation displays endeavours worthy of recognition by the world. As our great thinker Magtymguly Pyragy once said, "Look at your future, do not forget your past, utter polite speech, restrain your anger. If you are able to speak, please say pleasant things; the public has suffered much from bad things." I can see happy days in the future.

If I have learned one thing about Saparmurat in all of this, it's that he is an eternal optimist. As long as you don't have gold teeth and aren't staring your parents in the face when talking to them there will be nothing but good things in your future.

Life means existence, and death is absence. Absence is one, existence is of three stages. You yourself are the present existence, your child is tomorrow's existence and your father is yesterday's existence. Death comes all of a sudden. If you are not one of three, you cannot win victory over death.

Alex Chiu, watch your fucking back!

Unfortunately, the Ruhnama is far too long and ingenious to cover fully here, but I would like to finish this article of devotion to the man, the teachings, the legend Saparmurat, by offering a round up of some of his most enlightening maxims.

"Protect your child so that he doesn't become like that!"

"The father is like a high mountain with a grandeur of body and a snowy summit as high as the clouds in the sky."

"LET ME SEE WHAT I'VE WORKED FOR IN YOUR SMILING FACES!"

"My mother wove rugs all day."

"Love all beings. Through love you can understand the meaning and the expressive language of plants and animals and have some kind of wisdom and saintly perceptions."

"My younger son had an accident while he was drunk and driving. He almost died. It would have been better if he had died."

"Our historical silverware and goldware have come to be the favourites of women as beautiful as fairies."

"I noticed a certain feeling after my youth. I think all mature people have that feeling."

Remember folks, this guy is the unopposed dictator of a nation of 22 million people. He makes all of them read this book and they still don't rise up and kill him. Now that is power. Saparmurat Niyazov/Turkmenbasi, from my inner heart, I salute and praise you.

Photoshop Phriday is Filmed In Front of a Live Studio Audience

Hello plugmonkeys, Livestock here. I'd like to call your attention to no less than Photoshop Phriday, which is now live and resting comfortablely in this hyperlink manger. The theme this week is about as pointless as you can get, but it caused a hardy chortle to rumble about in my person. That said, the Something Awful Goons busied themselves by simply taking things and putting them into inappropriate media formats.