How to Win at Starcraft

Tuesday, Sep 26, 2000 by Hakan (@TwitterHasBannedAllMyAccountsEver)
It is the goal of all prepubescent boys and men who seek prepubescent boys to be the best at the games they play. Since many of you reading this fall into one of those two categories, I thought I'd like to help you all out by telling you how to succeed at Starcraft. I have divided the strategy into three parts: pre-game, during-game, and post-game. Enjoy! 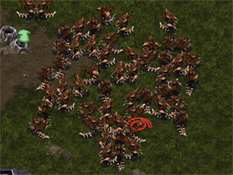 The only thing in the world that can beat this army of Hydras is... an army with a few more Hydras.

Getting started: If you are making the game, under no circumstance should you make it a non-"Hunters" map. Doing otherwise will result in shattered dreams of "what could have been but will never be." Since 99% of all Starcraft gamers are either Korean or mentally retarded (or both), "Hunters" is the only map which their puerile minds can comprehend. "Hunters" is the best map, after all, since everyone plays it. If you fail at making a "Hunters" map, try the next overly played one there is, such as "Lost Temple" or "Dire Straights", because picking an original map means you don't understand the intricacies of the game, no one will want to be your partner, and you will most likely die of brain cancer within a month.

In the pre-game chat room, make sure to use the "caps lock" key and speak in fragmented sentences. Talking in complete sentences will scare your opponents into thinking you are a military strategic genius and they will immediately leave. Also, make sure to type the words "gl" and "hf" as the timer is counting down. They stand for "good lubricant" and "helpless frogs," which are references to teenage sexual experimentation. This makes you look "cool" and "down with it."

BONUS TIP: To really fit in to the Starcraft crowd, before sending a message, take all the words and rearrange them in new and exciting locations. For example, the boring old:

"Hello, would you like to play a game of Starcraft?"

"GAME TO OF HELLO STARCRAFT YOU LIKE WOULD TO PLAY? GROUTY!"

(note: the nonsensical word "GROUTY" was thrown in to add a touch of "realism" to the sentence)

At the start of the game, immediately tell your ally to rush. As we all know, rushing means you have "L33t haxor skillz" and your penis is larger than most other males. If you realize your ally is a newbie or someone of lesser skill, feel free to chastise him for it; he won't get better at Starcraft unless someone tells him how much he sucks. On the other hand, if your opponents are newbies, feel free to make fun of them as well. Since you are a better player, God loves you more and you will take the throne as the next king of the world.

Since you are most likely playing "Big Game Hunters" (which by the way, is much better than regular "Hunters" because the fact that it has only has one choke and unlimited money makes it a military strategists dream come true), it might be best to seal yourself in and go straight for Carriers or Battle Cruisers, depending on your race. Completely ignore worthless units like the Templar, Ghosts, and Defilers (since no one uses them, they're obviously the worst unit in the game). They have no function other than taking up valuable Vespene Gas that should be spent on the more effective Carriers and Cruisers. 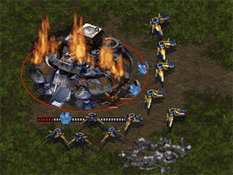 The ultimate humiliation: taking your miners and using them to destroy the enemies' last remaining building.

Make mass units of one type, like Hydras, Dragoons, or Marines. Making more than one type of attack unit causes your computer to take longer processing what's going on, allow you to die easier.

Never expand. This is the best strategy for the top players. Maps like BGH take advantage of this well-known recipe for success by giving you unlimited resources. If your partner wants to expand, try to dissuade him from doing so. If he insists, un-ally him and kill him since he is ruining one of the foundations of Starcraft.

After you win, make sure your opponent knows you were victorious, since sometimes players don't realize who won or lost. Telling him how badly you won or how crappy he is will make you a better person too. After all, if a game like Starcraft can't predict how great a person you are, what in the world possibly can? Make sure to use obscenities and references to the other player's mothers when you are telling them how perfect you are as well. These are the calling cards of winners, my friends. By the time you are done thoroughly humiliating your opponent(s), the whole Starcraft community and Blizzard themselves will reward you with monetary prizes and porn of Kerrigan (before AND after she turned into a Zerg).

I hope this guide has helped all you fledgling wannabe's out there. It was exhaustively researched and cost the lives of millions of Koreans. Keep your head up and reach for the stars!