Winnie the Pooh; Hobo with a Shotgun; Water for Elephants

In a perfect world, there'd be something for everyone. Families could delight at the wonderful, magical, animated storytelling of Winnie the Pooh; sadists and other young men would shit themselves with joy over the violent splatterfest Hobo with a Shotgun; and lonely middle-aged women and their estranged teenage daughters would be moderately entertained by the circus romance Water for Elephants. See? Sometimes being positive helps.

EXPECTATIONS: I'm not ashamed to admit that I am genuinely excited for Winnie the Pooh. The storybook aesthetic and the return to the core of the characters has me very intrigued, as silly as that may seem. Also, this gives me a good excuse to break out my awesome Tigger impression at parties. How could that possibly be bad?

REALITY: Charm. That's the word of the day here. Winnie the Pooh is so charming that you just don't want it to end. Character-driven cartoon antics like these inspired Robert Altman, so it's no surprise that this trip down memory lane evokes Altman at his best (M*A*S*H, Popeye), and you'll see why in the plot summary that will immediately follow this sentence.

Christopher Robin, the young boy with the vivid imagination, returns to the meadow with his timeless friends Winnie the Pooh, Eeyore, Owl, Piglet, Rabbit, Kanga, Roo and of course Tigger. Pooh is out of honey and is essentially starving; meanwhile, Eeyore loses his tail and the gang attempts to find a replacement. In the midst of all this light-hearted fluff, Owl manages to convince them all that they must work together to catch a fearsome creature known as a Backson. This leads to them all being trapped in a situation of their own design, but obviously everything works out nicely in the end and everyone has tea. 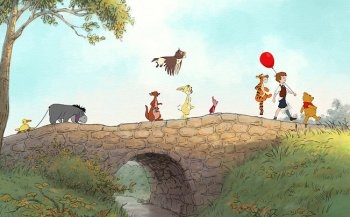 I'd suggest playing poo sticks, but that might be too obvious.It's episodic, it lacks drama or tension, and it's barely feature-length, yet somehow it manages to be cinematic and entertaining. It seems likely that Disney looked at event-filled, overwrought drivel like Rio and Mars Needs Moms and thought "wouldn't it be interesting if, instead of doing that, we just got some fun, endearing characters and had them interact with each other?" That's the basis for the entire film; instead of huge, sweeping character reversals, romance and action, Winnie the Pooh is content to let its cast of characters simply be. There is no upheaval at Owl's arrogant attempts at leadership, no sudden cure for Eeyore's crushing depression, no journey into maturity for Tigger. Every one of these characters is fully realised from the start, and every moment of the film is carried by that.

So pre-occupied is this film with character over story that the story must become a character and impose itself upon every situation. From time to time the narrator (John Cleese) must actively tell the characters what to do in order to progress the light plot; we all know they'd be content with an uneventful day otherwise. Sometimes the text of the story is visible outside of the borders of the colourful images, and occasionally it even impacts the events itself. 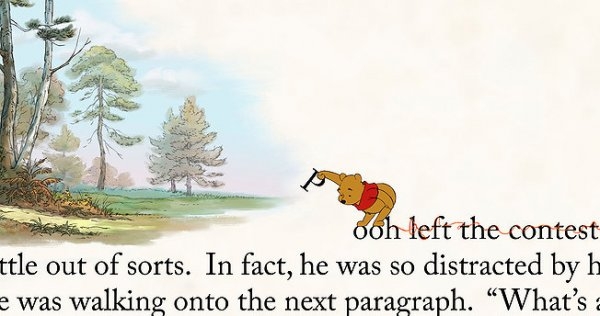 Hey, don't mess with the text!

If there are no epiphanous reversals or obvious messages driven home by this film, then what could it possibly be teaching our children? Anything? Nothing? Well, by focusing entirely on a small group of characters and their relationships, this essentially evokes the small world of a child's own life. Just as Christopher Robin lives exclusively in the world of his imaginary friends, a young child ordinarily lives within the confines of his or her family or guardians. If anything, this film could instill a need to question authority and not accept things on blind faith. I'm totally in favour of awakening a rebellious streak in pre-schoolers, but that's probably because I don't have kids of my own.

The most unique thing about Winnie the Pooh is how it makes itself accessible to adults. Most films of its type would resort to making inappropriate references and innuendo to get a giggle from the dads in the audience. Winnie the Pooh doesn't do that, instead trusting in its characters and being genuinely funny without using cheap tactics. This is Disney going back to its roots, producing quality animation with an eye to top-notch storytelling instead of pandering to the lowest common denominator. On top of all this, we have an emphasis on talented established voice actors like Jim Cummings instead of the celebrity voices that permeate every animated film that comes out these days; the only famous name here is John Cleese. This feels more like the Disney that brought us classics like The Jungle Book than the self-destruction they've indulged themselves in in recent years.

It sounds like the perfect film from my relentless praise, but I can see how this kind of drama-less narrative could put off a lot of people. As charming as it is, older kids and teenagers might have trouble getting into this. Personally, I would have liked it if this film were twenty to thirty minutes longer, but you can't have everything. Now, if you'll excuse me, I'm gonna go pouncin' and bouncin' and trouncin' 'cause that's what Tiggers do best!