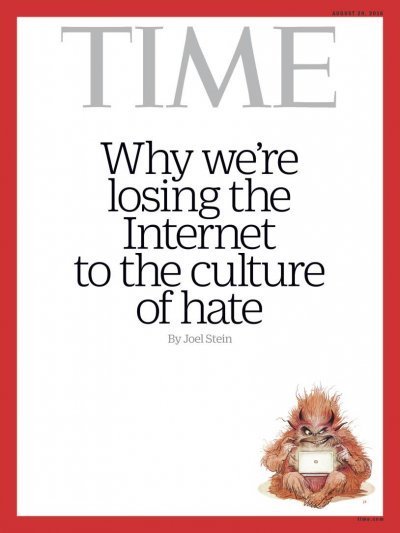 THey're called "trolls". And they are the guy from Hatred of online. But unlike the guy from Hatred's righteous quest to cleanse the world of the scum of humanity, these trolls are only in it for themselves. Hello, I'm Joel Stein, the guy who wrote the TIME magazine "Me Me Me Generation" article, and I've found out about computers.

"Trolls" - an insidious new type of internet user who doesn't use the shift key - come from a broad spectrum of sexualities, ethnicities, and political affiliations. However, or do they? It would really fuck up the central thesis of this article if that were the case, so I'm bafflingly going to state it once and then immediately attempt to prove the opposite. Trolls are white power ISIS van drivers. Trolls eat love and shit fear. Trolls are the opposite of medicine. Look to your left, and look to your right. If you're using a computer, you probably didn't see anyone - but the trolls are already all around you.

"Trolls" - basically the Agent Smith from The Matrix of online - live inside your computer and post low content replies on your status updates where they call you chumber and gluten master. In the old days of the internet, ideas spread freely, all were equal, racism and homosexuality hadn't been invented, and every ten minutes a $20 bill came out the floppy drive. However, today's trolls probably don't even know what the floppy drive is...

"Trolls" see the world as a gigantic playground - and every poor victim is another slide. Trolls send hateful comments to poor hard working writers such as yours truly for the "lulz" - and hopefully my usage of this term won't remind you of when Fox News ran this exact story back in 2007 - a corruption of LOL which stands for Laughing On Line. But the only ones laughing at the end of one of these trolls' coordinated hacking assaults... are no one.

These days, horrific things happen online every day. "Trolls" see themselves as baseball bats - and everyone's a ball. Yes the entire article is going to be sentences like that. Trolls can be anywhere, from the darkest message boards of the deep web to underneath a big cardboard box propped up with a stick. Their favorite pastimes are commenting on hard working TIME journalist's articles to say that they're comprised mainly of irrelevant tangents and meandering anecdotes, and CHILD MURDER.

Are "trolls" millenials? Sure.

"Trolls" are the woodlice that come pouring out of a hollow twig when an errant ray of sunshine strikes at such an angle as to illuminate its entire interior. Let me be 100% clear: this is NOT a metaphor.

What exactly is a "troll"? To understand this, firstly imagine a freshly painted wall. Pure, pristine, smooth, a little shiny from the glossy finish. Now imagine a fist punching a hole straight through that wall, ruining it. That fist is mine, after a sleeper cell of an elite troll cadre called me "Soel Jtein" on ello, essentially "swapping" the first letters of my first and last names. And now there's a huge hole in my bedroom wall... thanks a bunch trolls... that's so funny I forgot to laugh...

There have been reports of non-TIME journalists whose lives have been affected negatively by trolling. Sadly, their tales have been lost to TIME. But the next time you look at a web-site and see the CSS so tattered and ragged you can see your reflection in your monitor, [ADD CONCLUSION BEFORE PUBLISHING]