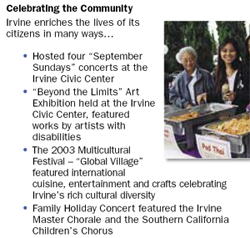 IRVINE CELEBRATES THE HELL OUT OF THE COMMUNITY!!My early nerd years were spent growing up in the rural hicklands of Western New York. I lived in a kinda charming little village with a rich, colorful history and a lot of poor, white people. Across the street from my house was a seemingly endless cornfield. Less than a mile down the road was a "gun club," which was really just a fancy name for "a cement wall in the woods rednecks drunkenly shoot their firearms at."

Alas, once I reached adulthood, I had to leave my hometown. In an economy where the top two careers for men are "farmer" and "domestic abuser," there's really not many opportunities for someone with a thorough knowledge of HTML. So I moved completely across the country to Orange County, California.

The O.C. (as retards like to call it) is pretty much the complete opposite of my native land. It's home to some of the most terrible, shallow, rich, and materialistic people on Earth. For example, Dennis Rodman lives here. The cost of living is insanely unreasonable, with the average home price currently over $600,000 and average monthly apartment rents of over $1500. Local car chases broadcast live on TV are our most high-brow form of entertainment. On the plus side, the weather is great!

To make matters worse, I live in easily one of the weirdest parts of Orange County: Irvine. Home of Blizzard Entertainment (makers of the digital cocaine that is "World of Warcraft") and Mark McGwire, Irvine describes itself as, "one of the nation's largest planned urban communities "

Unlike my hometown, which was founded hundreds of years ago by some idiot who was too lazy to walk all the way to Niagara Falls, Irvine was pretty much just a big ranch until it was incorporated in 1971. So Irvine's most treasured historical artifact is probably a disco ball.

Irvine is literally a corporation. It's like living in some kind of dysfunctional Orwellian future world, except with less robots and greener landscaping. Most of the housing, property, and retail space is owned in some way by the Irvine Company. I myself live in an Irvine Company apartment, which is very beige. The only discernible difference between buildings in Irvine is that the older ones (built in the 80's) are a darker shade of beige.

Every year, the residents of Irvine get an annual report, just like stockholders of Halliburton and Pfizer do. This report is filled with performance metrics and other corporate type stuff. Here's an example: 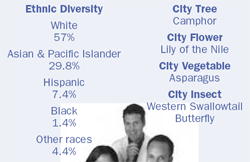 I guess that part of the report is supposed to demonstrate that the city is doing a good job at keeping black people out? I don't know.

The Irvine Spectrum is the cultural heart and soul of the city. It's basically just a big outdoor mall with an IMAX theater. I think this actual promotional image pretty much sums it up:

Cell phones, sushi, high style... throw in a couple of breast implants and a surfboard and you've just stereotyped all of Southern California!

Outside of the Spectrum, Irvine is probably best known locally for its police department. Irvine cops will pull you over for speeding, jaywalking, or just being ugly. Irvine is one of the safest cities in California, so I think the cops are just really bored. In fact, Irvine was well on its way to being named one of the safest cities in the United States until some guy walked into a local supermarket with samurai sword and hacked off the heads of two former co-workers. Ooops.

So what's it like living in a giant corporation? In a word... boring. Sure, Irvine is clean, safe, and quiet, but it's basically a continuous strip mall interspersed by chunks of land which are too difficult to bulldoze level and build a Starbucks on. The city refers to this land as "open space" or "parks."

The sad thing is that as America expands its living space into currently lightly populated areas like deserts, cornfields, and former nuclear waste dumps, you're going to see a lot more Irvine-type cities pop up across the nation. Preplanned, prefabricated, corporate communities laid out on neat little grids. Maybe if you played a lot of "Sim City" as a kid you can get a job laying out these soulless little slices of sterile shelters. Hope you like beige!