"A proud few of us remain, Tooth Tooth, who sing the praises of Odin through our black metal-- black because, though we were cursed and corrupted with the white skin of Yacub's perverse science, we retain the memory of our true ancestor, the Asiatic original black man. We decorate our bodies as a parody of Yacub's horror, and yet we strive above all to regain our righteous essence. We burn down the churches of Yacub's mystery god."

Tooth straight buggin out he head by now, you heard? Last time he shared true wisdom with a white man was years back, when he built with Pope John Paul II. But this was truly some next-level shit, and Tooth's head was spinning like a mafucker. Could what this white creature said be true? Was he merely an agent of Jeremy Birdcastle, the alabaster sorcerer who corrupted Tooth with swine? But something was telling Tooth that this white man could be trusted-- surely a vexatious emotion for one such as he!

But one thing troubled Tooth above all. How did Valp Kattunge, the blood-smeared black metal wizard of the white north, find Tooth Tooth in this most corrupted of places? Seem as though Valp already detected the question that gnawed at Tooth's soul, so he spoke right up on that. 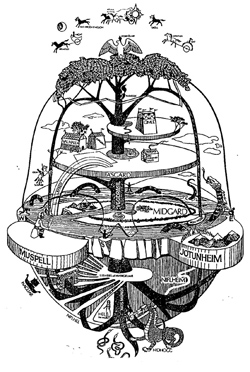 "I was guided here by a friend, Tooth Tooth. He said that you had been corrupted by Yacub's followers in a most heinous fashion. He knew where you would be, and with haste I booked a Mørktvarg concert. As I tell you this, I sense that you know of whom I speak."

And Tooth did know, true enough. What friend he got with that kind of loyalty, to head far into the hinterlands of the earth and summon a seven-foot black man disguised in the palest white skin of the enemy? What friend know Tooth gonna end up at the county fair, even though that ain't a place where Tooth normally be caught dead at?

"Yes, my righteous brother," said Valp. "Your beloved eagle is my friend, too. He lived for millenia atop Yggdrasil, the mythic world tree, until he was captured by agents of white cruelty and placed in a cage. You rescued him, Tooth Tooth. The eagle became your brother, and though you have tasted the hated flesh of swine, he is your brother still."

And though Tooth kept his outward cool, he found himself overcome by emotions. "I feared that my eagle had abandoned me due to my corruption," he told Valp. "For he was not a bird that would tolerate the eating of swine, even in his spiritual brother."

"He cannot be by your side at this time, Tooth Tooth. But your eagle would never truly forsake you. He has laid before you the path of redemption, and you will find it here, in this most corrupt of places. There are two things here, Tooth Tooth, that will be very important to you. One is a swine, the garbage-browsing creature so reviled by your just palate-- and not just any swine: the world's largest."

"By the souls of my black forefathers," spoke Tooth Tooth. "Unwittingly, I have entered the most evil place in the universe! More evil perhaps than Patmos, historical stronghold of Yacub's legions."

"No! I cannot face him in this state of porcine intoxication!"

"But you must, Tooth Tooth, and you will. He is here to show off a huge-ass turnip that he grew in his windowsill in the East Village. He is an urban farmer, and he hopes to gain further status among the white man by displaying this huge-ass turnip to them."

"Egad," Tooth Tooth cried. "That is some bitch shit."