Traveling is probably the best way to go to a place. I'd be hard pressed to think of a better way to get somewhere. The only problem is that traveling requires you to do things and make decisions from time to time. Sure, it's a hassle, but don't give up just yet! 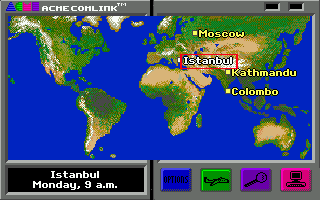 I am a seasoned expert. I've been inside a plane. I have seen flight attendants in person out of the corners of my averted eyes. One time I stepped off the shore of the United States and entered the cool blue waters of the ocean, drinking deeply from its nourishing reserves. When I was younger I owned a globe for almost a month before it was taken away by my parents for being too suggestive (it was contoured). I'm what you'd call a pedestrian.

Allow my years of accumulated wisdom to guide you through your journeys.

First, you will need a destination. Some people suggest visiting a place that you've always dreamed about, or talking to a travel agent. My advice? Walk with purpose until someone asks where you're going. Coyly ask them where they think you're going. If they don't reply, chase them down and shake them until you get an answer. That's where you should go!

You'll probably need an airplane ticket. Try calling Julie. Call Julie. Dude, don't even start this with me. Just call Julie. She's not there. Damn. I thought she'd pick up if someone else called her. Well, forget about calling Julie. Take these pebbles and throw them at Julie's window. Take this barrel of water to drink when you get thirsty, and this pillow to rest when you can no longer throw. I'll stop by with more pebbles in a week.

Now that you have your ticket, it's time to get packed! You'll want at least three outfits or one very formal bathrobe. Bring your laptop. I know you'd rather enjoy your trip, but it can come in handy. For instance, someone might walk up and ask you what a laptop looks like. If you don't have a laptop in that situation, you're screwed, buddy. What else? Ah, pets! Animals don't travel well, so shave your pet and put its fur in a plastic bag. Place this plastic bag up above your fridge, where your animal can't get to it. Pack all of your pet's toys and food. Leave the pet at your home.

In case you get bored, you might want to consider packing a few books as well. Don't waste this opportunity on mindless trash! Learn something! Find a book that's entirely composed of a sequential string of numbers. My favorite is the one that starts at "10" and goes "11, 12," and so on. I won't spoil the ending.

Now you're packed, so it's time to go to the airport. The place is always sort of a madhouse. Yelling "John!" will result in a dozen guys turning to look at you expectantly. You don't have enough time to talk to all of them, so try to avoid yelling "John!" unless it's absolutely necessary. 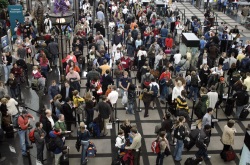 With so many airlines, terminals, and gates, finding your flight can be a little confusing. Just wander around until you see a line and then stand in it. As you slowly make your way to the counter try to work yourself up into an unreasonable and angry frenzy. Try thinking about stuff that gets everyone mad, like syringes full of anger-inducing drugs or people who aren't in lines. Eventually you will get to the front of the line, where you can be a snide asshole to someone in a uniform until you are herded toward your departure gate.

At some point your tender, supple body will need to be searched for terrorism. Don't worry. I didn't tell you to pack any terrorism, so as long as you've been following this guide to the letter you should be fine.

Once you've arrived at your destination, you should check into a hotel to unpack and wash up. You should try to stay at a hotel that does NOT have a sign depicting a proudly defiant raccoon being drawn and quartered. If all of the hotels in your chosen city feature such a sign, choose one with a fancy sounding name like "Fancy Inne" or "The Regal Cloaca".

Now that you're settled in, it's time to see the sights! Find out if there's a good restaurant, specifically a Red Lobster. If you eat there, I recommend the lobster. When you have finished your meal, immediately return to your hotel. Sit on the bed with your hands resting on your knees. Wait patiently until it is time to catch your return flight.