This exam will focus on the anatomical changes observed in the wealthy class, and track their evolution from economically advantaged, envied, powerful and productive members of society to horrifying, miserable, impotent lumps of fat and glands. 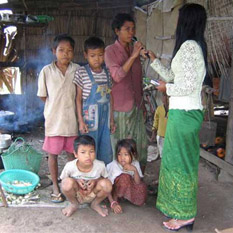 Don't get your hopes up kids, the future doesn't look so hot either.

As the information age drew to a close in the late 21st century, man achieved a kind of stasis, having conquered nearly every natural foe. Humanity's primary struggle became a class struggle rather than a survival struggle. Increasingly rigid socioeconomic stratification led to the selection of wildly different traits between the lower, middle, and upper classes. Over the next several thousand years, the lower class became adapted to serve the upper class, as well as to survive lean times, the middle class evolved into sitcoms starring Jim Belushi, and the upper class grew increasingly sedentary and dependent upon the constant care of the lower class.

By about 200,000 AD, the adaptations undergone by the poor and the wealthy had rendered them unrecognizable as humans. The lower, or worker class, had become a race of lithe, muscular pygmies with no teeth and large protruding lips optimized for nursing.

Centuries of unfettered gluttony and overindulgence resulted in several interesting adaptations among the upper class. Most notable among them being an increase in their average weight to around 1500 pounds, and a tripling in the size of the liver, which displaced the stomach and gave the midsection a distended appearance. With no need for locomotion, the arms and legs withered into pencil thin stumps. They could also dislocate their lower mandible to consume large pieces of food such as whole geese and quartered bison.

Communication
Given the adaptation of the mouth to do nothing but consume, several important sites of language articulation disappeared entirely, leaving individuals with no way of communicating orally aside from deep, flatulent sputters emanating from deep within their bowels. Evidence suggests the vestigial extremities were repurposed as communication organs, hanging limp when the creature was content (rarely) and flailing wildly when he was enraged (often).

Physical gesticulation was supplemented with glandular adaptations that allowed the wealthy to communicate by secreting scents to indicate their mood and desires. These scents ranged from pungent (mitigated anger) to acrid (unmitigated anger). 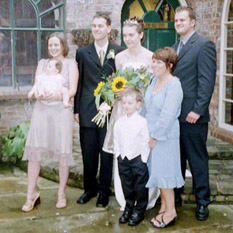 You knew it wouldn't last forever.

Excretory Adaptations
Even having tripled in size, it appears that the liver of the upper class was still being overtaxed. In addition, their rich fatty diet would make heart disease an inevitability if they didn't develop some additional apparatus for removing metabolic wastes and other unwanted material from the bloodstream. To assist the liver and heart in their unenviable duties, two large sinuses developed on the back which ejected an oily "soup" with clockwork regularity. This soup consisted mainly of bilirubin, sebum, and pea sized lumps of pure cholesterol. It was also rich in nutrients needed by the worker class to continue serving the wealthy, and was greedily lapped up before it could hit the ground. A salty payment for a hard day's work.

Immunological Adaptations
Being essentially mounds of fat rendered immobile by the cruel hand of evolution left the upper class susceptible to infections. Bedsores left to fester in deep crevices could quickly develop into fatal gangrenous infections. To cope with this, their sweat took on the role of antiseptic. An unfortunate side effect of this adaptation was the complete defoliation of the ground for a 20 meter radius.

Reproductive Adaptations
The swelling of the liver displaced the stomach, pushing it forward and causing it to sag over the genitals, eclipsing them and making sexual reproduction at first unpleasant, and finally impossible. In their place the wealthy developed a self-fertilizing "unisex" organ. The rate of reproductive success was about one in thirty. To compensate for this inefficiency, they evolved a womb capable of incubating twelve babies at a time. Each month a mucous slicked fetus would come wriggling out of them and fall to the ground, followed by a torrential discharge of foul smelling, sulfurous afterbirth which served two purposes. The first was warding off the worker class who, thinking the child was edible, would slaughter it and attempt to feed it back to its parent. The second was to provide the offspring itself with the impetus to flee from its parent and establish itself in a place with more plentiful resources.

During the first stage of life, the upper class larvae who didn't drown in afterbirth were able to move independently. Locomotion occured through a back and forth flopping, not unlike that of the lungfish. In roughly the third week of life, their spine turned from cartilage to bone, and further movement became impossible. This is thought to be one reason for the astronomically high infant mortality rate of the species. After settling in, it would begin secreting a sweet smelling, oily fluid from its skin to attract neighboring worker drones. This is the least foul thing it would secrete over the course of its life. When a curious worker strayed too close, the young captain of industry would emit a deluge of pressurized mucous from an opening near the small of its back, covering the individual and marking it as the property of the upper class organism. 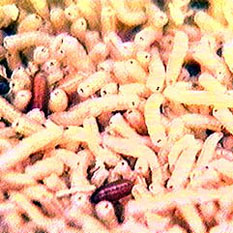 By 1,000,000 AD, the differences between the upper and worker classes were so profound that they no longer even inhabited the same genus, although their symbiotic interdependence had deepened drastically. Furthermore, the worker class had splintered into dozens of species within its own genus.

Physically, the upper class had increased in size by a factor of roughly six, and required several times the number of assistants as its evolutionary predecessor. Their bodies became towering, oblate, featureless mounds of soft pink flesh littered with a handful of orifices and glistening with a million foul fluids. By the time an upper-class specimen reached its third birthday, it was too big to support its own weight. Drones constructed ivory scaffolding from the bones of its ancestors to support it.

Another key difference was in the structure of the brain. The limbic system, specifically the amygdala and hypothalamus, had increased tremendously in size, consuming the R-Complex and neo-cortex as they grew. This rendered the organism just sentient enough to despise itself and everything around it, but utterly incapable of higher thought and unable to circulate its own blood, inflate its own lungs or digest its own food. This forced the worker class to specialize into several varieties of endosymbiotes and perform these tasks manually.

2.5 Million AD – Extinction of the upper-class

The universe finally had mercy upon itself, and a plague wiped these horrible animals out in under a decade, leaving behind only patches of stained, barren earth that still stink to this day. Good luck on the test! It's been an appetizing semester.