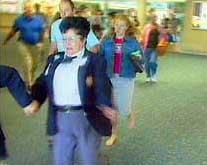 These people are doing the smart thing and fleeing the airport. I think that woman in front is an ogre.

With the Christmas season rearing its acne-ridden face early next week, many people are packing their suitcases and preparing for their inevitable cross-country holiday flight. Friends, family, neighbors, enemies... everybody goes flying for the holidays, although only at the time when your flight is scheduled to depart. Of the 195 billion Americans flying this Christmas, 194 million of them are all going to be on your plane and fighting for the space between your seat and the middle one. We advise wearing spiked shoulder pads, or if at all possible, deciding to ride on a ferry boat instead.

If you absolutely, positively, must fly this season, we would like to offer a series of tips and advice that will help you make it to your travel destination with a minimal amount of hassels. All major airlines have increased their security and checkin procedures as a result of September 11th terrorist attack, in the hopes that they'll aggrivate the entire human population from ever flying again. If there was some economical way for the major airlines to fill all their jets with poison spiders and solid concrete, they'd jump at the chance. Until masonry becomes more affordable, we'll all have to settle for the current state of the airline industry and use the following Something Awful Travel Tips to make the flying experience more enjoyable or slightly less suicidally annoying.

There are two different ways to travel: either through ticketed travel or ticketless travel. Each is exactly the same and requires you to have a physical copy of your original ticket, the receipt and proof of purchase, the home address and phone number of the person who sold you the ticket, and a DNA sample from the tree that was cut down to produce it. If you fail to bring all these to the airport, you will not be allowed to fly. Ever. Although this sounds like a bad thing, trust me, it isn't.

Armed anti-terrorist military forces are positioned throughout the airport, looking for suspicious foreign people who don't speak English. This is why they are always stationed around the group of people who do not speak any coherent language, the airport X-ray inspection squad, a group of highly trained untrained people who were imported from Jupiter to operate the radiation-emitting machines while speaking in tongues to invisible people who never existed.

The "new and improved" carry-on baggage rules are strictly enforced. These rules permit you to only bring aboard only one bag which cannot exceed the physical dimensions of a "Sweet Valley High" paperback book. Wallets, car keys, and children are considered to be carry-on baggage, as well as the individual objects contained inside your carry-on baggage. You will be forced at gunpoint to check all your baggage and clothing and prosthetic body parts at the ticket desk so they can load it on seperate planes and take bets as to what country or dimension it will end up in.

Passengers are no longer able to bring box-cutters onto their flights. In order to prevent renegade boxes from taking over the cockpit and hijacking the plane, each flight has at least one federal agent disguised as a loud-mouthed Jewish woman from Florida. Key phrases such as "my son just graduated from college," "I'm flying to see my nephew," and "it's unseasonably warm" are simply codewords meaning "there are currently no enemy boxes trying to crash the plane."

Travelers may no longer joke about terrorists or terrorist boxes within a 500-mile radius of a federal airport. If you absolutely MUST crack a joke about terrorists, you may do so in the designated "Free Speech" sections of the airport which are located next to the smoking sections in an underground cavern filled with toxic waste and troll-like creatures who beat you with refueling hose parts.

Plastic knives are no longer offered in airport restaurants. Instead, tickets to use an in-house diamond cutting laser system must be purchased if any passenger would like to saw through the slab of charred animal ass that they bought for the cost of a new car at the airport bar and grill. 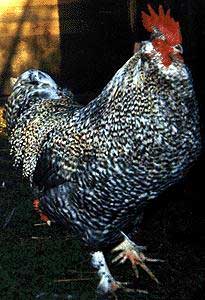 This is the second result that returns when "airport" is entered into Alta Vista Image Search.

Any terrorists attempting to bring a diamond cutting system on board will have their travel privledges revoked and be forced to sit in the "time out" room for the weekend while they think about what they tried to do.

Airlines are allowed to partake in random checks of passenger carry-on luggage. If your name is chosen by their 1980's computer system which runs on deisel fuel, you will be pulled out of line and taken aside by security guards who have been trained by the government to look at your underwear while making really frustrated facial expressions. Everything in your bag will be inspected up to the point of dissecting each part into its individual atoms and asking the atoms if they plan on blowing up the plane. Make sure to get your atoms in order before arriving at the airport.

Passengers are not allowed to read any books or magazines that promote or describe things that have the potential to catch fire or explode unless it's a Tom Clancy novel about planes catching fire and exploding. Dean Koontz books are fine as well, but at least two of the major characters must be teenagers who have been unknowingly infected with an experimental virus produced by a meglomaniacal corporation to make people either psychic or more like housecats.

Arrive at the airport least two hours before your plane is scheduled to depart. This way you will be six hours early for your flight.

Electronic devices such as Gameboys or laptop computers cannot be used within 30 minutes of takeoff or landing. This is to prevent a reoccurance of the 1987 catastrophe when a Boeing 747 was taken over by a rogue Iraqi Nintendo and forced to jump up and smash a floating brick, revealing a gigantic bouncing coin.

We hope these travels tips have helped in your quest to get from point A to point B this holiday season, as long as "point B" is not a horrible, fiery, deadly inferno of doom. And by "we" I mean "I." And by "hope" I mean "don't care if."