My Life as a Car 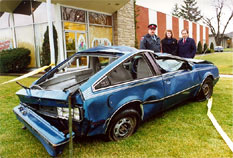 The police in some areas arrest car owners for mistreatment or neglect. Thankfully I do not live in one of these areas.I thought it was an immutable fact that my car never breaks down. Sure, it had that problem with the CV Boot years ago, and just a little over two the alternator gave out, but other than those two little incidents it has been a stoic Japanese workhorse. I pretty much knew what the alternator was and after the mechanic explained it to me for the third time while I chuckled and shined a laser pointer in his eyes I finally had it down. If you really want to know, the alternator connects to the engine to transfer energy into useable electricity and charge the battery, I think. I'm not very good with machines bigger than a computer. Cars are out of my league and trains and small buses absolutely terrify me with their Byzantine steam valves and hoses and little pinching gears.

As for the CV Boot, well I have no fucking clue, I asked the mechanic and he went off on some tangent about the axle and I just started picturing Guns N' Roses' front man Axle Rose eating a plate of lasagna. Then a helicopter piloted by Slash broke in through a glass sun roof and he started shooting at Axle Rose with what at first seemed like machineguns but then I realized were actually bee cannons. Around the time the bear started trying to open a can of tuna like an otter opening a clam the mechanic was wrapping up his tale of the dread CV Boot and I was none the more educated.

All of these years of intimate knowledge about my cars have built into a crescendo of disaster with my car's recent unforgivable starting failure. I tried jumping it multiple times, something that sounds really exciting but you would probably think it isn't if you ever did it. After about the third time I was really hoping my battery would just explode so that I could buy a new one.

My woes with the car have continued over the course of a few weeks, with me alternating between stranded in my apartment, relying on friends for rides and jumping my car long enough to drive it halfway across the lot to have it die again. Some light was on in the dash long before I started having problems, and in hindsight I guess I should have done something about it immediately. Unfortunately, I don't speak car, so I didn't know what the light meant. Also, I am intensely lazy.

I called a local automotive parts shop with the thought that I might be able to replace any diseased components within my car. The man on the other end started spinning his sailor's yarns about amperage and corrosion or the CV Boot or something. I interrupted and told him exactly what the problem was so he would stop using that kind of scandalous language with me.

Me: "Yeah, yeah, yeah, that's what they all say buddy. I'll tell you what my car needs is some more Vitamin C and a sparkplug in the fuel line."

Clueless Parts Dealer: "Well I have never heard of such a thing as a sparkplug in a fuel line, but if you will allow me to expand on my theory about a dead battery and a failed alternator we might be able to resolve this problem together."

Me: "Slow down there Hoss Cartwright. Back up the gravy train and pull it off the wagon trail, because you've got me all mixed up. What we need here is some unilateral action. Now do you sell bolts and hammers?"

Clueless Parts Dealer: "Indeed we do good sir, but I believe you are mistak-" 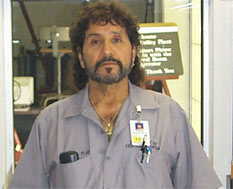 Never believe the parts man. He is an albatross, a harbinger of terrible things to come, and is not to be trusted.With greatest haste I made my way to the auto parts shop and purchased a five pound bag of assorted bolts and a five pound hand sledge. I arranged the bolts in a geometric pattern on the hood of my car and hammered about three of them clean through the metal before the whole hood caved in and my car somehow caught on fire. The part's dealer, ever the troublemaker, emerged from the store yelling and liberally doused my car with some sort of confusion foam that also stifled the fire. After a brief exchange of slanderous comments I agreed to allow him to test my battery if he would help me detach the charred remains of my hood so I could continue to pound bolts through it with the hammer.

While I was pounding away he returned from testing my battery to inform me that it was indeed as dead as Jesus after he lost his third life in the ghost mansion or whatever happened. I don't know, the Bible is like cars and I always write my own rules. So I threw a wad of money at him and told him to do what needs to be done, because I wanted him the fuck out of my hair so I could concentrate on those bolts. The more of them I pounded through the harder it was getting to maintain the overall integrity of the hood.

He came back and installed a new battery in my car and told me to start it. So I tossed the keys at his fat head and dazzled him with my laser pointer so I could get back to those bolts. He fired it up and said the "battery light" was still on. I asked him if that's a good sign and he replied "no". I suspected subterfuge.

That was when I blacked out. According to the police report my clothes ripped and my muscles started growing until I was twice my previous size, rippling with huge muscles, and wearing a tattered white shirt and purple jean shorts. My skin was also green. I uprooted a yield sign and threw it into the nearby hospital where it started a fire in the burn ward. Sweet irony!

I say keep your chromed exhaust manifoldy type thing with the gears! Your hard sell makes me angry!There is nothing like waking to the smell of burning flesh, except for maybe waking to your car still not starting and the sassy auto parts guy telling me I needed a new alternator. Which is actually what happened, and I never blacked out or turned into the Hulk, it turns out I just imagined all that while he was describing why my alternator, in its death throes, had also sucked the life from my battery. So I bought a new alternator too, and since I had such good luck with the hoodbolt installation I figured I could handle things myself. Parts man offered to assist me but I didn't trust his sideways glances and told him to skedaddle off to his parts nook.

I held the not inconsiderable weight of the new alternator in my hands and stared down at my car's exposed engine, so vulnerable and soft. Each piece of worn chrome interlocked elegantly with another piece of spray sealed metal to produce a series of nodes. Connecting these nodes were various rubber-sheathed cables, hoses, and belts, like a giant vulture had decided to make a nest inside my car out of tire scraps. I fumbled around inside this mess, feeling for the comforting hardness of bolts on the alternator, groping perversely like a veterinarian birthing a calf.

Coming up empty handed was not on my dance card. As my frustration grew I began kicking my bumper and grabbing hoses and clawing at them until they separated from parts of my engine, spewing an interesting variety of neglected fluids. My eyes stinging from some car approximation of blood, I reached elbow deep into the car and extracted the beating heart of alternator goodness. It was the proverbial nexus of energy within my car, the Head Master to my car's Optimus Prime Head Master Edition Transformer. 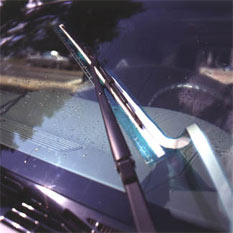 These iMac windshield wipers are attached to a translucent orange reservoir that is easily distinguished from the alternator. I don't own a Macintosh.I flung it against the window of the auto parts shop with a resounding thud that sent soapy blue liquid splashing across a faded NASCAR decal. Actually the decal was applied from within the store, and it laughed, gloating at my ineffectual attempt to soil it with my car's most useless of humors. I fell to my knees defeated; knowing that if I were in a John Woo movie somewhere behind me a flock of white doves would select this moment to take wing. I did my best impression of that litter-saddened Indian in those old anti-littering commercials and allowed a single tear to roll dramatically down my age-weathered cheeks, cheeks that concealed my secret of an Italian rather than a Native American heritage. Actually I have no idea what the fuck I'm talking about; I'm half-German and half-British and look like something carved out of bar soap.

I actually didn't cry, I didn't throw a tantrum, but I still knew I was beaten. I packed up the new alternator and tossed it in the trunk of my car next to the jumper cables and a three-year old piece of black matte board that I used to mount design mock-ups on. Somewhere in there, probably drifting in the taurus of my spare tire, was an unopened bottle of ketchup that disappeared from a bag of groceries in a millennium past. I blame it for every inconvenience possible, and ancient sealed ketchup makes a better fall guy than you might imagine.

To make a long story somewhat less long than I would make it if I didn't take this opportunity to accelerate and condense the timeline of events subsequent to me departing the parts store, I went to a mechanic and asked him to install the alternator. He asked me a bunch of questions about my car that I could barely answer and then refused to install my store-bought alternator. He informed me a new alternator - identical in every way excluding minute differences in chaos-theory related manufacturing offsets - would cost over twice as much excluding labor. I let him know that this was not an acceptable resolution and departed.

That's when I began building my alternator installation cannon, but I'll save that story for another time. Tonight, as I type this, my car sits in the lot, a wounded predator with no prey. It will start, it will drive, but it is bleeding and cannot last long. I must transplant this occult alternator to its charred breast or all is lost. It will die in my arms, as much as I can cradle a car in my arms, gasping out its final blasts of fiery breath as its electrical systems fail. So, in sad contemplation, I curse the name of a Christ so unmerciful that he will not provide me with a car like the Terminator. One that even though battered and crushed, with its fake skin torn half off of its face, will reroute its internal power supply and go after a giant ball of CGI mercury.

I end with a poem. It is a piece most unwieldy and amateur, and one that I hope will better convey my innermost feelings about my car. 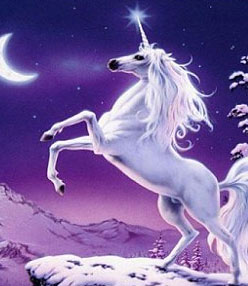