I Was A Pre-Teen Psychopath

Me, age 4, taking a break from Stickybear and Pac-Man on my trusty Apple IIe. I'm still sitting in front of computers, wearing that exact same shirt.

Since I'm unemployed and have nothing better to do, I decided to travel back to my childhood home in snowy Western New York for the holidays. While adjusting to the lack of both decent temperatures and asshole Southern California SUV drivers that constantly try to run me over, I've been doing what any down on his luck nerd worth his two-inch thick spectacles would do in this situation: sell off all my precious childhood memories on eBay.

Actually, that's not entirely true. While I do have a stack of old computer parts, baseball cards, comic books, Transformers, and He-Man figures in the basement that I plan on selling to fat men living in basements, I haven't really got around to auctioning off much of anything. I've been too busy being cold and scaring old friends and relatives. But what's distracted me the most from my ultimate goal of pawning off the treasured heirlooms of my youth is the shocking discovery that I was one messed up little kid.

Sure, I'm not exactly the picture of perfect mental health nowadays either, but I can blame all my current problems (outside of the physical deformities) on my long exposure to the Internet. But the only person I can blame for being a stupid little kid is myself. Or my parents. And that's no good, I need something tangible, something I can get money out of. Hmmm, maybe I can sue Sesame Street! No, that wouldn't work, if they called Big Bird as a witness I'd freak out and start crying. I saw him bite a kid's head off and eat it once, I swear. And that Bert character hangs out with known terrorists.

I submit to you as evidence a few choice entries from my second grade, age eight, February 1988 journal. Thankfully, this is the only second grade journal I've managed to unearth thus far. I sincerely hope for the sake of mankind that the rest have been destroyed. As you can see - even back then - I was already well on my way to embarking on a successful career as a geek-ass loser: 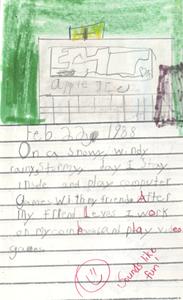 If you can't make out my childish scrawl (which really hasn't gotten much better with age), this is what the entry reads:

Feb 22, 1988: On a snowy, windy, rainy, stormy, day I stay inside and play computer games. With my friend. After my friend leves I work on my coinbook and play video games.

Way to spend the most impressionable years of your life, wasting time on computers with 8-inch discs, playing Karate Kid for NES, and… collecting coins?! Oh, how embarrassing. Yes, it's true: I used to collect coins. I spent many hours painstakingly jamming pennies into stupid cardboard books. In my equally geeky early teenage years, I cannibalized my extensive collection of quarters in mere minutes, since I needed them to solve Teenage Mutant Ninja Turtles down at the arcade. Check out my horrible drawing of an Apple IIe. I don't know what game I was trying to portray, but it doesn't look very fun.

And even back then, I used way too many commas. I also was completely fascinated by dinosaurs as a young lad. Check out these thrilling back-to-back journal entries: 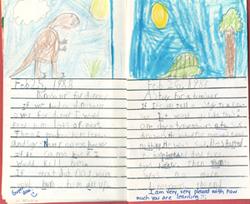 Feb 25, 1988: Dinosaur for dinner. If we had a dinosaur over for dinner I would feed him lots of meat. Then I make him leve. And say "never come back." If he came back I would kill him. If that did not work wolud burn him all up.

To this my teacher, Mrs. Lodge, replies: "super ideas :)" Way to encourage childish stupidity, Mrs. Lodge, no wonder I ended up writing for this godforsaken site instead of a respectable magazine like the National Enquirer! If killing the dinosaur didn't work, I would burn him all up? What?!? You retard. Dinosaurs are not witches!

The next entry isn't much better:

Feb 26, 1988: A Story For a dinosaur. If I could tell a story to a dino-saur it would go like this: one day a tyrannosaurs ate six dinosaurs. He looked for more and found no thing. He was sad. He started to eatplantsAnd died. Five days later. Then there were no more dinosaurs. The end.

"I am very, very pleased with how much you are learning!!!" my teacher says. What exactly did I learn? That "eat plants" is one word? That dinosaurs went extinct because one T-Rex ate all the other dinosaurs, was forced to eat trees, and croaked? Wait a minute, why I am telling stories to dinosaurs? Dinosaurs are extinct, you dumb little shit! You can't tell them stories or invite them over to dinner! Jesus Christ, if I ever travel back in time I'm going to kick your pansy coin-collecting carcass over a goal post.

I also discovered a cache of "books" I wrote in fourth grade. You would think that at the ripe old age of ten, I'd be a little less pathetic. Sadly, it just isn't so. Here's a scan from "Horror at Midnight: Book One:" 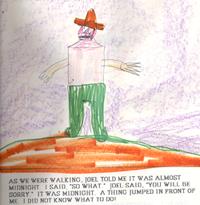 AS WE WERE WALKING, JOEL TOLD ME IT WAS ALMOST MIDNIGHT. I SAID, "SO WHAT." JOEL SAID, "YOU WILL BE SORRY." IT WAS MIDNIGHT. A THING JUMPED IN FRONT OF ME. I DID NOT KNOW WHAT TO DO!

On the next page, it continues: "I HEARD A SCREAM. IT WAS MY OWN SCREAM. I HEARD MY NAME, 'BRIAN, BRIAN.' IT WAS JOEL." Nice work, Steven King Jr.! That's some snappy dialogue! Some truly terrifying tribulations you've whipped up there! The second book is more of the same, the only thing interesting about it is that a girl in my class who grew up to be really hot wrote "excellent story" and signed her name on the back cover. In hindsight, I should have used this book as a pickup line in High School: "Hey baby, if you liked 'Horror at Midnight: Book Two' you'll love my latest work: 'Whore, You're in My Bedroom: Tonight!'" Yeah, that would have probably worked. 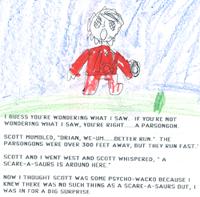 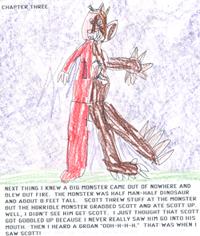 It's interesting to see how little my artistic abilities have advanced. Compare this to some of my more recent work and you won't be able to discern much of an improvement. So why do both monster things feature a big number twelve on their chest? The answer is quite simple, really: I was a big Buffalo Bills fan back then and twelve was quarterback Jim Kelly's jersey number. I guess it made sense to put his number on every monster in the book. I think I seriously thought it was a funny or clever thing to do at the time.

Speaking of "funny," one of the books in the stack was probably my earliest attempt at satire. It's entitled "What Really Happened at the Revolutionary War." Since the illustrations in this book are sparse, I'll just transcribe a bit of it here:

In winter, 1777, American soldiers went to Valley Forge because the British captured Philadelphia. They were trying to get it back.

It was so hot at Valley Forge that everyone had to wear no clothes. If they did they would die of heat stroke.

There was so much food that almost everyone died because they ate too much.

Meanwhile, England tried to start a war with Mexico because they felt like it. Most of them froze to death.

Hahaha! It's funny because - in reality - Valley Forge was terribly cold and miserable! I cleverly told the opposite of the truth, thus creating scathing political commentary! And that bit about England invading Mexico? How delightfully ludicrous!

Near the end of the book, there's this little masterwork:

The Kevination of Independence cannot be written about because John Hancock lost it on his computer. The Nintendo version was blown up by an angry apple pie.

What a hoot! Our founding fathers didn't have access to computers! And how could an apple pie blow up a Nintendo cartridge? That's silly! It's hijinxs! Hilarious hijinxs, I tell you!

And the box crammed with comics I churned out during Middle School study halls? The hundred-page plus collection of 8th grade penned short stories? They only made me more sad and depressed. That junk made the High School "humor" pieces I wrote about Quake and unfortunately posted on the Internet look like pure unadulterated genius.

Looking through my past failures had one positive effect, however. It made me realize that I was doomed all along. I was destined to be a second-rate freak, and there's nothing I could have done to alter my fate. I still can't draw, I continue to write embarrassingly bad, unfunny crap (proven by my update last week, if nothing else), and I still have the overall mentality of a drooling, annoying rugrat who wants to invite dinosaurs over for dinner and tell them historically inaccurate stories.

The only real differences is that I'm taller, my eyesight is quite a bit worse, and instead of thinking that girls are icky, they all think I'm icky.

If I really did have the opportunity to meet my second grade self, I probably wouldn't really follow through on my previous threat of kicking him for a field goal or perhaps an extra point. Instead, I'd probably just give him some advance tips for River City Ransom and beg him not to waste so much money on baseball cards. "They're never going to be worth anything, buy Microsoft stock instead," I'd say.

Besides, kicking myself over a goal post would be too much work. I'd just beat me up, because it'd be one fight I'd be sure to win, either way. My old self wouldn't care, he was probably used to daily beatings by then. Loser.