The Art Of War By Sun Tzu Is Garbage

Commonly referenced in pop culture and embraced by business idiots with delusions of leading interesting lives, The Art Of War is an ancient rumination on strategy. Everyone seems to take it for granted that it's a brilliant book. Has anyone actually read it, though?

"If you know the enemy and know yourself you need not fear a pop quiz which asks you to identify the two participating sides of the battle."

"Helmets are for assholes."

"Let your plans be dark and impenetrable as night, and when you realize that it is impossible to read your terrible handwriting on all that dark paper, be prepared to make new plans." 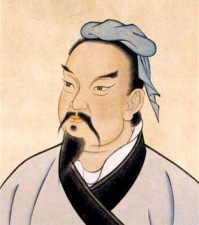 The asshole himself."The wisest course is to avoid war entirely unless it is absolutely necessary, or the enemy has an accent that is very different from yours and it sounds sort of funny, or someone repeated the word 'freedom' until you became totally psyched about killing other humans."

"The supreme art of war is to subdue the enemy without giggling."

"An army marches on its bladder. Train your troops to walk backwards at all times. This way they can relieve themselves without stopping, saving valuable time."

"A panicked force is a defeated force. Intimidate the enemy by commanding all of your soldiers light themselves on fire."

"Quickness is the essence of war and bathing."

"There is one formation which can never be broken. Employ this tactic, and no battle shall be lost again. Have three of your men stand facing one another in a triangle formation, their shoulders touching. Now place six men in a circle around the first group, also facing inward. Continue to do create inward facing circles until you have run out of men. This is it. Nothing can stop this formation."

"If you wish to turn an opponent into an ally, give him a fish. I think he likes fish. That's just what I heard. If you feel a fruit basket would be best I won't stand in your way."

"How best to prepare your men for individual combat, that inevitable point when orderly formations give way to desperation and chaos? Teach them to make every attack count. The ultimate goal in one-on-one combat is to fell the enemy with a single blow. To this end, remind your soldiers that there is one location on the human body which will always result in death when stricken: The shoulder."

"A true leader knows how to manage resources efficiently. Sure, you could spend ten thousand coins to keep your forces supplied for a month. But doesn't it make more sense to take those ten thousand coins and invest them in tickets for the kingdom's lottery?"

"The advantage of height is of vital importance. Always remember to position your forces at the lowest point on the battlefield. This way they have the perfect vantage point to spot the enemy atop a hill, effectively eliminating their height advantage."

"Never indulge in too much cake before a battle. A wise man knows that three pieces is the maximum."

"Use your time outs wisely. Each side only gets three per half."