I was an Everquest attention whore 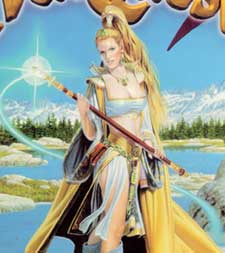 “Do come with the game?” “Oh you, tee-hee-hee.”In 1999 I played Everquest frequently during summer vacation between my freshman year and sophomore year of high school. It was one of those situations where your friend calls you up and says, “Hey man let’s play Everquest it’ll be awesome and I’ll get a bunch of other people to play come on let’s play!!!” and then he falls off the face of the Earth for the next three months. To be honest I didn’t really feel like playing but I didn’t have anything better to do and he was pretty insistent about it.

The way he talked about the game actually made it sound fun. Unfortunately he sort of glossed over the fact that the majority of the time you’ll spend “playing” Everquest consists of camping the same spot for hours on end so you can get some rare item that isn’t so rare anymore because everybody in the fucking game has it by the time you get to the front of the line. It got to the point where lines started to form so you could kill the monster and rape his corpse for some stupid gem or weapon. But what the hell else was I going to do during my summer vacation? Get a summer job and acquire some sort of life experience that would have prepared me for the real world after high school and possibly raise my level of maturity? Ha! I wouldn’t be writing for this web site if I had done that. I somehow convinced my dad to give me his credit card number and created an account. My dad’s $9.95 a month adventure began that day.

My first character was some kind of male knight named Spokker Jones. I was considering naming my first character Spykkyr Jonesyth because I was afraid Spokker Jones would not comply with the ridiculous Everquest naming policy. Fortunately Spokker Jones went through on the first try. The first thing that struck me about Everquest was the size of the game world. It was enormous and I had trouble finding my way around as every wall looked like the same blurry texture with nothing to distinguish itself from the other blurry shit-colored walls. I asked another player where I might find the exit into the exciting zone where I could kill beetles and rats and was met with the following response.

Oh boy. I had not been playing for more than 15 minutes and I had already been called a faggot. I didn’t know what the guy was doing staring at a wall in the corner but it must have been really important. I’m sure he meant to say, “I’M A BUSY FAGGOT.” That would have made much more sense.

To say I had trouble getting used to Everquest is an understatement. It was almost impossible to figure this game out and no one was willing to help me. On top of that no one would group with me. For a game that boasts the ability to play with thousands of other people at the same time, there sure was a hell of a lot of people who would rather play alone. Like my grandma always said, “If they’re an antisocial faggot in real life then they will probably be one on the Internet as well. Unless it’s an Internet forum. Then they’re the baddest motherfucker on the entire Internet.”

After an hour of fumbling my way around the desert with nary a clue about what the hell I was supposed to be doing I thought of a new plan. I knew if I was going to get any respect I’d have to take drastic action. I quickly logged out and created a new character. She was to be a female wood elf ranger. Soon the world of Norrath would be mine for the taking! However, as I would soon find out, I didn’t have to do any taking at all. It would all be given to me. 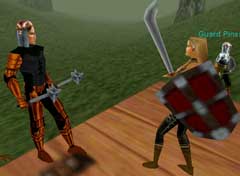 Love at first sight.I was not playing as a female wood elf ranger for more than five minutes when some guy playing what looked like a walking turd (it was later explained to me that it was actually a half-dwarf) wandered by and gave me a bunch of high level armor for absolutely no reason at all. Since the wood elf starting city was even more confusing than the first place I started at I asked him where the exit was. The fucker actually escorted me to the exit. I don’t know what Everquest is like today, but back then playing a female character was like unlocking some kind of easy mode.

Do you need anything else ma’am?

No, I’m fine thanks. With that he logged off and I continued on my merry way. Playing Everquest as a female character was a lot easier than playing as a male. Suddenly everybody was willing to help me. Everybody wanted to group with me. I noticed that during battles I was often the first one healed. I died a lot less than I did when I was playing as the male character. Looking back I wonder if those guys looked upon my character with some sort of obligation to protect me because I was playing as a girl. Maybe it had something to do with the basic instinct that men have to protect their women and it was manifesting itself in these Internet nerds. All I knew is that I was the darling member of every party I joined. I actually started playing the part. 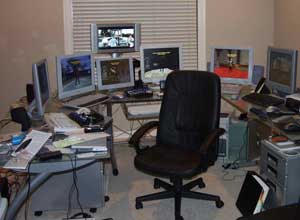 The best Everquest attention whores often play six different whores at a time to maximize the attention they receive from horny role playing nerds.I had only one problem, the dorks who played female characters despite the fact they were actually male. I was always in competition with them and they were growing in numbers. When they joined the same party as me I had to outgirl them in every aspect, and I did. I was cuter, sexier, and a lot more flirtatious. I often resorted to devious methods in order to rid myself of these bothersome fakers. I would create a train of monsters, lead them to the manbitches, and then quickly run away. I tried to report them to the GMs for every little infraction. Sometimes I just “forgot” to cure them when they were near death. Sorry about that, better luck next time! I was Queen Everquest and nobody would invade my turf. No one!

One day I received one of my usual messages.

Oh boy, it was that first half-dwarf guy who gave me all that armor when I first started. I guess he couldn’t resist my feminine charms. He asked me to join his guild so I did. Over the next few weeks he would talk to me practically every night. He was like a love-stricken puppy dog messaging me his sweet nothings. In fact, he never left me alone. The guy was insane. He practically worshipped my virtual elf chick, showering upon her gold and rare items. Hey, as long as I got a steady stream of items, weapons, and armor so I didn’t have to go fetch them myself I didn’t give a shit.

It’s the age old adage, if you are talking to a hot chick on the Internet and “she” is being really flirtatious with you as if she would jump on your dick the second the opportunity presented itself, it’s probably a man. Men don’t go online with the intention of e-fucking some other guy in a Yahoo “married but looking…” chat room but they do this all the time whether they know it or not. They are so lonely or so horny they will believe what they want to believe. This guy wanted to believe that a hot chick had some sort of connection with him whether or not the scenario was plausible or not. The funny thing is that I almost never said anything of substance to this guy. I think that when he read the messages I sent to him he saw a completely different text. I imagine when I messaged him things like “okay”, “what”, and “hello”, he saw “OH MY FUCKING GOD I WANT YOU IN MY PUSSY RIGHT NOW.”

One day we were talking and he asked me where I was from. Orange County, I replied.

Where in Orange County?

Oh Christ, I knew where this was going. Anaheim, I said.

Oh! What a coincidence! I live in Buena Park! 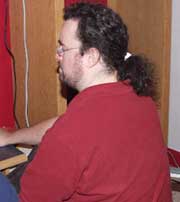 Imagine this guy covered in enough cooking oil to fry a buffalo with and you’ve got a good picture of what my Everquest boyfriend looked like.He eventually asked if I wanted to meet up for lunch some time and it was then that I devised a fiendish plan. I told him to meet me on Saturday at a local McDonalds. He asked what I looked like and I gave him so hot a description that he must have stained his shorts right then and there. The next day I grabbed a friend, told him we were going to screw with some Everquest nerd, and left for McDonalds.

When we arrived he was already there waiting. There was no way you could miss him. He was like a ghost among a sea of Mexicans. The guy looked so out of place. He looked like he was in his late 20s or early 30s, ridiculously overweight, and wore glasses. The guy was twiddling his thumbs, looking around nervously for his dream girl. Our plan was to tell him that I was really a guy, call him a pervert for trying to pick up chicks in a video game, and leave. My friend was egging me on.

But looking at him in that bastion of shitty fast food I felt sorry for him. More so I felt ashamed of myself, ashamed that I would stoop to this level. There was no reason to insult the guy, because he was already a walking insult to humanity, and so was I. We left the restaurant, effectively standing up the guy. It was like that episode of The Simpsons where Bart pretends to be a dashing gentleman named Woodrow and leaves Mrs. Krabapple crying at a restaurant. I wondered if the Everquest nerd cried. I tried to push such thoughts out of my head. With that, I went home.